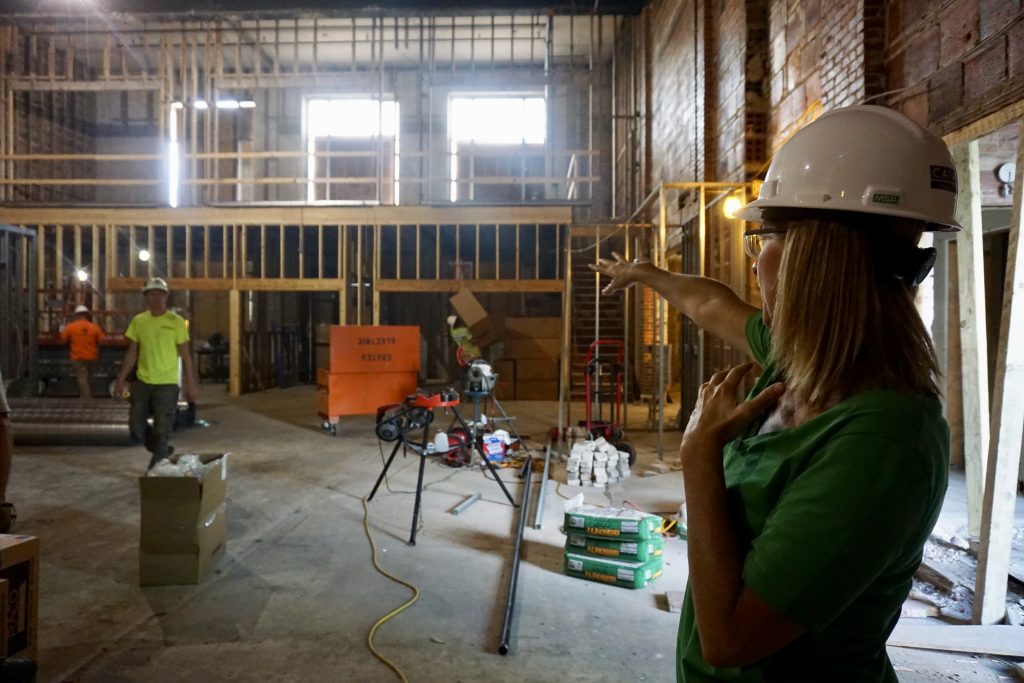 Juli Kaufmann points out where new shops and seating will be inside the Sherman Phoenix. Photo by Abby Ng/NNS.

Monica Oliver never imagined she would open a pizza restaurant. After 15 years working behind a desk to support two children, she did not think opening her own business was a possibility until she heard about the Sherman Phoenix, a new commercial center in the former BMO Harris Bank, 3526 W. Fond Du Lac Ave., in Sherman Park.

With the help of Sherman Phoenix developers JoAnne Johnson-Sabir and Juli Kaufmann, Oliver was able to find the space and resources she needed to start her own pizza place, called Sauce and Spice.

She also found a valuable mentor in Giacomo Fallucca, chairman and CEO of Palermo Villa, Inc.

“A lot of people have ideas, have things they want do to, but they don’t know how to go about it,” Oliver said. “I would never have known how to start a restaurant. For someone to be able to open the door to entrepreneurship … it’s a blessing.”

As a mentor, Fallucca works closely with Oliver as well as Johnson-Sabir and her husband, Maanaan Sabir, who are also owners of Sauce and Spice. They meet weekly to discuss everything from decor to menu and pricing. 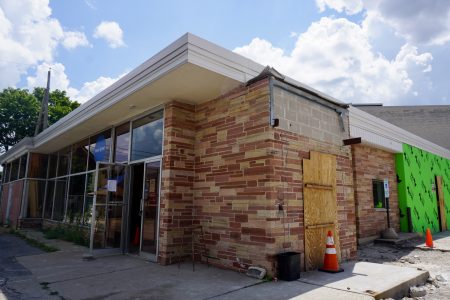 Real estate developer Juli Kaufmann said construction on the former BMO Harris Bank and the future Sherman Phoenix is on schedule for an opening in early November. Photo by Abby Ng/NNS.

“He’s a very, very busy person, but he’s taken his time to teach us and run a fine-tooth comb through every single detail,” Oliver said. “I don’t know a lot of people who do that.”

Fallucca, who is not only donating his time but all the equipment for the restaurant, said he is motivated by the enthusiasm and desire to see change in Milwaukee that everyone involved in the Sherman Phoenix shares.

Through mentoring others, Fallucca said he wants to pass on the knowledge he received from his mentors. He hopes that doing so will build much-needed trust between people of different backgrounds in Milwaukee.

“I’ve been accused of being a white businessman who doesn’t care about the city… but I really want to make our city a better place,” Fallucca said. “I believe it is in part the responsibility of business owners to do what we can do. I have to focus on what I can do.”

Mentorship is an important and unique aspect of Sherman Phoenix’s business model, according to Kaufmann. Forming this support network is meant to ensure the success of all tenants and employees.

“We’re bringing together neighbors and some really unusual suspects that understand what it takes to not only imagine and discuss healthy communities, but activate [them],” Johnson-Sabir said.

Other mentorships have been formed at the Sherman Phoenix in addition to the one between Oliver and Fallucca. Colectivo co-founder Paul Miller serves in a role similar to Fallucca’s, helping with Sabir’s new coffee shop, Shindig Cafe.

The Sherman Phoenix is more than just a building to Johnson-Sabir and Kaufmann. The new health, culture and wellness hub is about people, family, neighbors and community.

“This has become everything we’ve imagined in terms of connectivity,” Johnson-Sabir said. “We’re raising the spirit of possibility.”

Johnson-Sabir and Kaufmann are looking to involve more members of the community through investment. With $300,000 more needed to reach their $4 million goal, they are inviting interested community members to invest a minimum of $1,000.

With more than 25 tenants in the Sherman Phoenix, double what Kaufmann said she originally anticipated, they are able to take on more investors, including those who live in Sherman Park and nearby. By opening up investment opportunities, Kaufmann said she hopes to remove the exclusivity and elitism seen in typical development projects.

“There are plenty of people who invest in places where they’ve never stepped foot,” Kaufmann said. “It’s so disconnected and that’s not the way we originally built communities. We built communities by believing in each other and supporting each other and creating this network of financial opportunity. … This building, once it is up and running, will be owned by over 50 and hopefully closer to 100 investors from all walks of life.”

Ultimately, Johnson-Sabir and Kaufmann said they hope the Sherman Phoenix will bring economic and cultural gains to residents and will serve as a model for future development in Milwaukee.

Depending on funding, they expect Sherman Phoenix to open in early November.

“There will be more risks and more challenges, but we just feel so affirmed by the goodness of people,” Kaufmann said. “It’s a project filled with joy.”