Story Of a Great American Actor 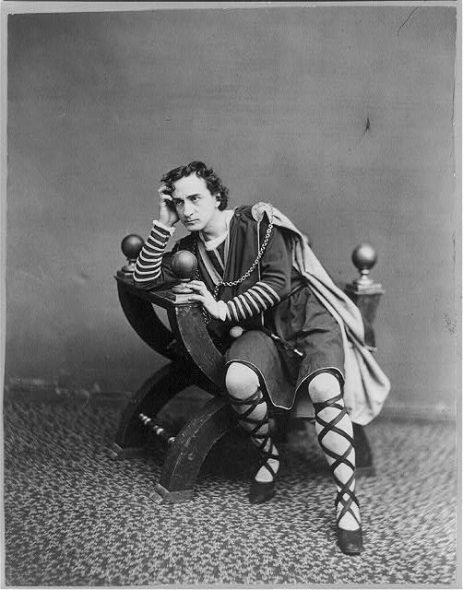 One of our finest actresses, Angela Iannone, as a scholar and playwright has long been intrigued by America’s legendary 19th century actor, Edwin Booth, whose instinct for naturalism and pinpoint analysis were ahead of his time and whose productive life was haunted by the infamy of his younger brother, John, whose assassination of President Lincoln almost destroyed Edwin’s career as America’s most famous Shakespearean interpreter.

Iannone has created a cycle of Booth plays exploring his fascinating life and times. This is the second in the cycle to be presented by a younger company, Theater Red, whose founders also work in other local company productions. The title, This Prison Where I Live, is taken from Richard II, the Booth Shakespeare production in 1879 Chicago that in this play conjures up Edwin’s ghosts, including his lost love and his hated but beloved younger brother.

Stage conventions and references from many classical works provide some humor while Shakespeare’s dialogue and interpolations more than frame Iannone’s character musings. Highlights include Edwin’s descriptions of an unruly audience and his extensive anger at his ever-present brother’s ghost. In Iannone’s mind and methods, he can never overcome his shame or his brotherly affection. He argues endlessly about it.

This would be a winning theatrical idea if the separation between stage style and human psychology was better recognized and if the actors knew how to differentiate the steps and purposes and keep the monotone out of the storytelling.

Iannone the director has not helped Iannone the playwright by failing to demand less Shakespearean flourishes and more humanity from this cast, several of whom I assume have been Iannone’s students. The head-on approach to the language fails to bring to life the concepts.

It is actually surprising that an actress of Iannone’s caliber didn’t lean on the cast more to explore the contrasts and opportunity for different approaches written into the concept. More explorative hands would have recognized the demand for variation, for nuance, for contrasting the stage mannerisms with the human ones. And how we long for an intelligent throwaway that would break the stentorian pattern of the dialogue!

As the ever sneering John Wilkes, Cory Jefferson Hagen has found a foppish exterior, but too much of a one-note troublemaking ghost. (A side note here that Leah Dueno’s period costumes are excellent.) As a concept of death disguised as a theater patron, Brandon Haut fails to find the pointed persistence and humor that should make the part less boring and more frightening. His hesitations become a mannerism not a characterization, just as Hagen seems more concerned with hitting tableau poses than exploring the sarcastic ingenuity of John Wilkes Booth.

As Edwin’s suffocating wife, Marcee Doherty-Elst (also a Theater Red founder) has some nicely cloying behavior that never quite rises off the written page while Andrea Burkholder as the tragic love from Edwin’s past uses exaggerated ethereal movement to communicate the playwright’s intent.

In the key role of Edwin, Jared McDaris knows his way around Shakespeare, but not how to break out of mannered looks and delivery to convey the humanity that Iannone wanted to emerge. A better production could enliven this play, along with tighter editing and more highly skilled ears from the actors.

As it is the production — running through September 9 in the 10th St. Playhouse home of the In Tandem Theater —  falls into the category of a well-meant, intellectually-thought-out production, but one badly in need of a truly actor-informed approach.