By Shawn Johnson, Wisconsin Public Radio - Aug 16th, 2018 02:25 pm
Get a daily rundown of the top stories on Urban Milwaukee 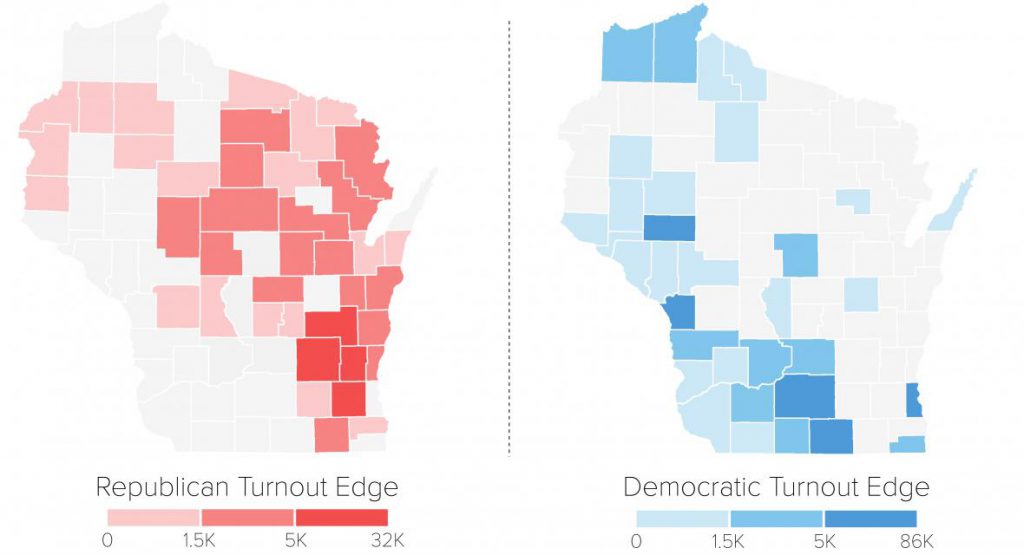 Wisconsin’s Republican primary for U.S. Senate generated millions of dollars in campaign spending this year, but in Tuesday’s election, it was the Democratic primary for governor that generated considerably more votes.

The two races are not a pure apples-to-apples comparison, but Tuesday’s primary results did nothing to silence talk of a potential “blue wave” in Wisconsin. There were nearly 100,000 more ballots cast in the Democratic primary for governor than in the GOP primary for U.S. Senate.

“Last night was clearly a continuation of a trend that we’ve seen all year long here in Wisconsin,” said Democratic operative Joe Zepecki. “Democrats have the edge when it comes to enthusiasm.”

It wasn’t just high turnout in Wisconsin’s largest cities that drove up the numbers. Democratic voters in the governor’s race outnumbered Republican voters in the Senate race in 33 out of Wisconsin’s 72 counties.

There were more candidates in the race for governor, and the eight Democrats vying to be their party’s gubernatorial nominee held several forums throughout the state. State Superintendent of Public Instruction Tony Evers won the crowded primary with roughly 42 percent of the vote.

But their race was a relatively low-budget affair, while Wisconsin’s Senate contest was among the nation’s most expensive. Heavyweight GOP donors backed both state Sen. Leah Vukmir and Marine veteran Kevin Nicholson, and the state Republican Party ran ads on Vukmir’s behalf.

“For the amount of money that was spent in the Republican primary … I did expect a little bit better turnout overall,” said Republican lobbyist Bill McCoshen, a veteran of several statewide GOP campaigns dating back to the mid-90s.

Vukmir won by turning out the GOP vote in southeast Wisconsin, where she’s been a state legislator since 2002 and a regular guest on conservative talk radio.

In those races, Walker and Cruz lost a majority of Wisconsin counties but still won lopsided victories because of massive GOP turnout in the Milwaukee suburbs.

Compared to those elections, Vukmir’s race was much closer.

Vukmir carried 15 counties compared to 57 for Nicholson, but she won the statewide race by six percentage points.

McCoshen said it was still a big victory for Vukmir given the amount of outside money that was spent attacking her from groups like the national Club for Growth.

“She’s really the story of the night,” McCoshen said. “To take the pounding that she took from the Club for Growth … and to win.”

McCoshen said he thought Vukmir would be able to unite Republicans behind her by drawing contrasts between herself and Democratic U.S. Sen. Tammy Baldwin.

Zepecki also said that he thought Republicans would unify before November, but he sees them losing more voters in the middle. He said Tuesday’s results show Democratic intensity remains strong.

“I see enthusiasm among Democrats in a way that we haven’t seen in a long time,” Zepecki said.