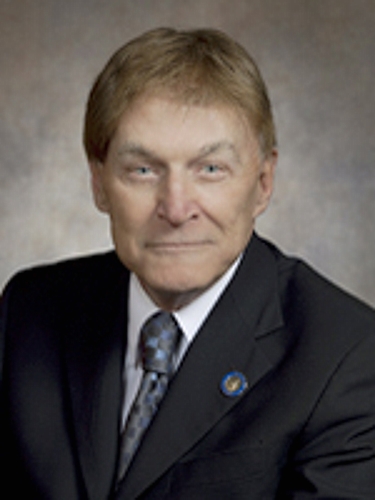 Mike Ellis. Photo from the State of Wisconsin.

The legendary lawmaker Mike Ellis will be honored tomorrow in Neenah, where he was born 77 years ago and whose values he championed every day he came to the Capitol from 1970 until 2014. Ellis died on July 20.Any column on the former Senate president, majority and minority leader, budget-detail wonk and acid-tongued Republican should start this way: Mike Ellis never forgot where he came from, and he knew when to leave the Capitol. That cannot be said of all Wisconsin legislators.First, Ellis was the son of a Neenah mill worker, and he would show you where he rode his bike to bring his dad his dinner when he was growing up. They met on or near a bridge outside the mill.Second, after the modern version of a political terrorist approached an after-cocktail-hour Ellis at a downtown Madison bar wired to record their conversation about a potentially illegal campaign-finance scheme, the wily veteran knew he could no longer compete in the scorched-earth world of social media politics. He chose not to seek re-election in 2014 and retired to the horse farm he and wife, Sandy, owned.Ellis left on his terms; he could not have accepted losing in a primary to someone he considered a zealot recruited by radical conservatives.In between those personal mile markers – growing up in Neenah and leaving the Capitol as Senate president – was the life of one interesting rascalBy force of will and encyclopedia-like knowledge of the state budget, Ellis put his stamp on all major spending decisions over the last 30 years.

Examples: Need the school-aid funding formula, and its origins, explained? How would state government pay two-thirds of K-12 costs? Size of the “structural deficit” – the imbalance between future spending promises and tax revenues? Why expand the School Choice program so quickly? Who sponsored the last “check in the mail” tax rebate – the one before this summer’s $100-per-child rebate? Who wrote the charter for the now-abolished Government Accountability Board?

Mike Ellis was part of all those big deals. He also fought for – and never got – campaign-finance reform.Yes, Ellis voted for Act 10, which scrapped collective bargaining for most public employees and made them pay more for health care and pensions, in 2011. But he voted for it only after arguing privately –with Gov. Scott Walker and his fellow Republicans – that it went too far and should be scaled back.Yes, many times officials – governors, cabinet secretaries and legislators from both parties – and even Capitol reporters wanted nothing more to do with Mike Ellis. They knew he would often praise them to their face, then dismiss them as “dumb as a box of rocks” in private.Yes, Ellis “stretched the truth” – the term Dale Schultz, a former Republican senator and majority leader used when he is commented on Ellis’s legacy for an Appleton newspaper reporter. There are too many examples of that to be listed here.Yes, Ellis had his personal quirks: Those aviator sunglasses, for example, which he said he had to wear after a chlorine accident made his eyes sensitive when he worked as a Neenah pool lifeguard. And thewig, which he had to learn to – sparingly – publicly joke about. And, he would usually project a “working man” image by driving his pick-up truck to the Capitol, instead of his luxury sedan.Trivia: Ellis once hired Morris Andrews, former executive director of WEAC, to advise Ellis on whether to run for governor and, if he did run, the political liabilities he would face. It was a fascinatingread.Tomorrow, Ellis will be honored by family members, a former staffer and people with (current and former) titles.But here is a fitting Ellis memory from Scott Bauer, capitol correspondent for the Associated Press.“Ellis loved playing the game of trading information with reporters and was well-known among fellow Republicans for doing it. ‘Why don’t you just go ask Ellis. He’ll tell you?’ Senate Majority Leader Scott Fitzgerald would often say, whenever we asked about a sensitive negotiation.“More often than not Ellis would be a mostly reliable source, but he also wanted information in return. I can remember leaving his office one time when he said, ‘Hey, you guys all know I leak like a sieve, but it’s got to go both ways!’”