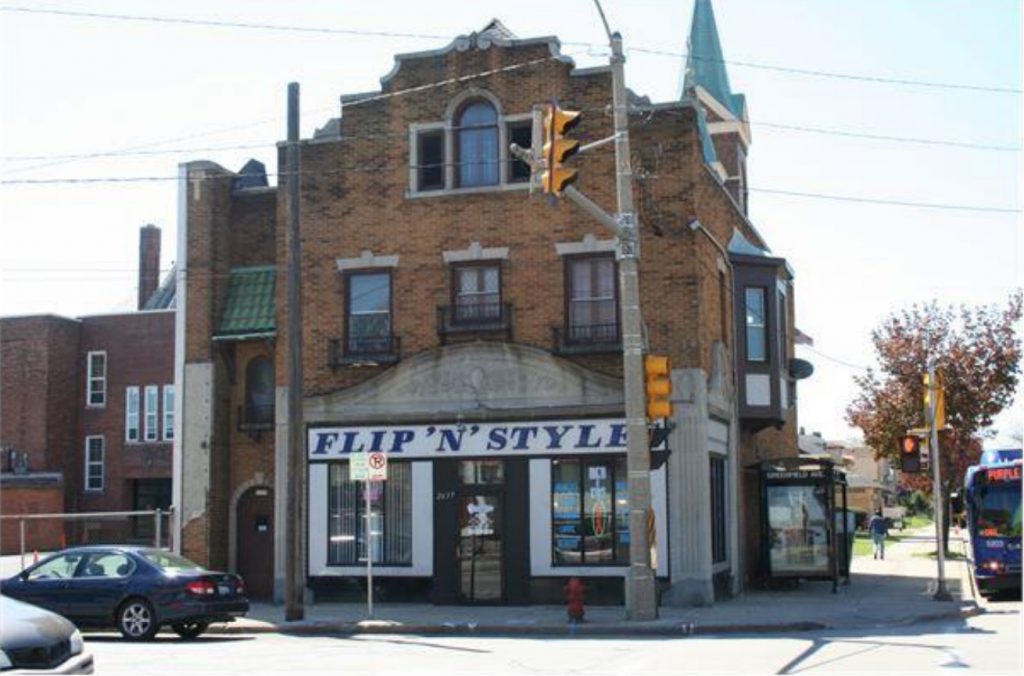 The Historic Preservation Commission has saved a commercial building in Clarke Square from the wrecking ball, at least for a month.

The commission unanimously granted permanent historic designation to the Lorentz/Harris Pharmacy building at 2635-37 W. Greenfield Ave. The Mediterranean-style building was originally built in 1896 and remodeled into its current form in 1931.

Notre Dame School of Milwaukee, which operates a 250-student elementary school just to the south at 1418 S. Layton Blvd. had sought to demolish the commercial building as part an expansion plan. School president Patrick Landry said the demolition is part of a $5 million investment in developing a male-only middle school and improving the campus.

Area resident John Sterr, who serves as executive director of the Villa Terrace Decorative Arts Museum and the Charles Allis Art Museum, nominated the building for historic designation upon learning of the school’s plan to demolish it. “This is really an integral part of the neighborhood,” he told the commission.

Landry told the commission, “it’s also been a problem for us with homeless sleeping under the awnings that we have to move in the mornings, and drug use and bullet holes in the window.” Sterr acknowledged that the neighborhood has crime issues, as he said many do, but added “I think the challenges that Patrick mentions they can be overcome. I personally don’t see tearing down the building as being part of the solution.”

The city’s Historic Preservation Commission staff supported the designation because of the building’s embodiment of distinguishing characteristics of an architectural type and its role as a visual landmark.

“This helps hold the corner at Greenfield and Layton Boulevard and keep that corner intact,” said city staffer Carlen Hatala. She singled out the stone design around the building’s first floor as exceptional, “I don’t know of any other storefront that has this kind of detail.”

Commissioner Patti Keating Kahn moved to designate the building. She told her fellow commissioners: “we got a lot of letters and emails in favor of the designation. We don’t have any in favor of tearing this building down.” The motion was seconded by Ann Pieper Eisenbrown.

The building is already listed on the National Register of Historic Places as part of the Layton Boulevard Historic District.

The national designation is recorded with the property record, but does not allow the city to require a Certificate of Appropriateness for demolition or other exterior changes. The local designation grants the city the power.

The 3,286-square-foot building is currently vacant. The most recent tenant was Flip ‘n’ Style hair salon. Landry said the school has not considered using the building for educational purposes.

The school has the right to appeal to the Common Council to overrule the Historic Preservation Commission.