By A.Jay Wagner, Milwaukee Neighborhood News Service - Aug 1st, 2018 11:41 am
Get a daily rundown of the top stories on Urban Milwaukee 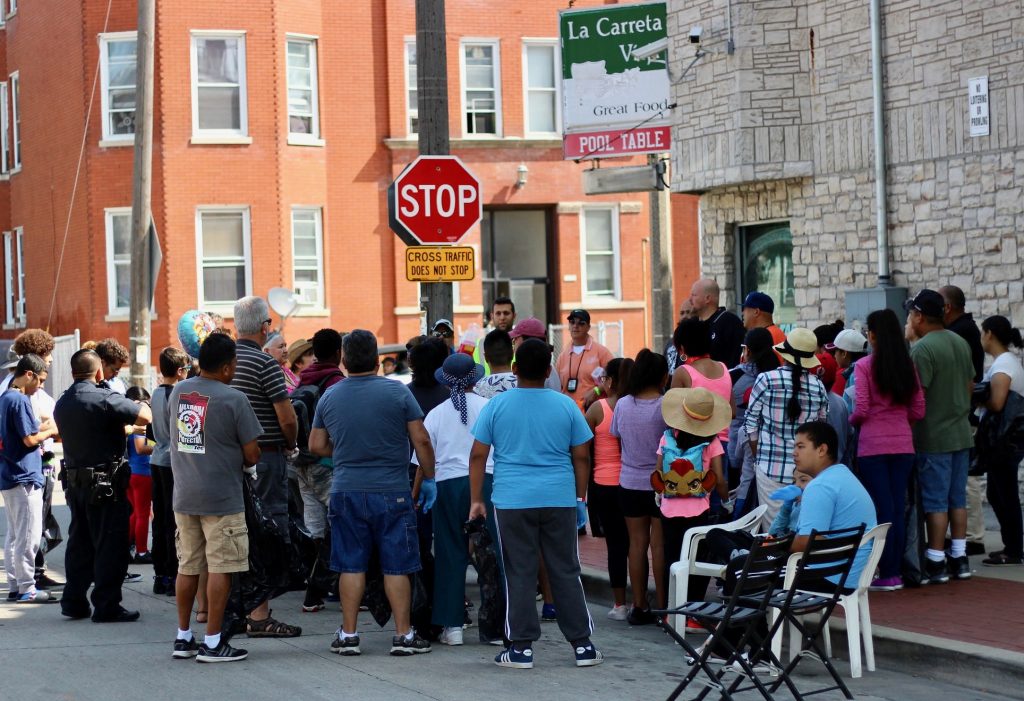 Residents gather before setting out to clean up the neighborhood. Photo by A.Jay Wagner.

On Saturday morning, a crowd of nearly 60 individuals gathered in front of Mi Pais, a Walker Square corner grocery, before dispersing to clear the area of refuse in an effort to reclaim the neighborhood.

The effort was aimed at gathering the detritus of the prostitution and drug dealing that have beset the strip of Greenfield Avenue. A number of community groups, including the District 2 Community Block Watch, Safe & Sound and the Southside Organizing Center, planned the cleanup and subsequent block party to not only collect used needles and stray wrappers but serve notice to those creating the nuisance.

Travis Hope, a block watch council representative and primary figure in coordinating the event, said the cleanup’s aim was simple. 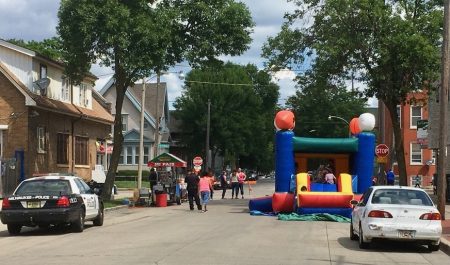 A block party following the cleanup included a bouncy house for children. Photo by A.Jay Wagner.

“We just want to bring the neighbors out, and let people know we care about this neighborhood. And we’re not going away. It’s about letting people know that it isn’t only negative things going on on this street, but positive things as well,” Hope said.

Jose Perez, District 12 alderperson, said the cleanup represents the diversity of parties invested in helping, citing not only the community groups, but a range of city employees from different departments.

“This is about letting the people know that these people are working, and they’re empowered. They’re getting organized, and they’re not going to let what goes on in the neighborhood dictate what is said about them or this street,” Perez said.

Communication among area residents has dwindled as challenges have multiplied, exacerbating the problems, participants said.

Paul Grippe, a Clarke Square resident for more than three decades and a block watch captain, said it’s not uncommon for neighbors to live across the street from each other for 10 years without ever greeting one another.

Grace Hernandez noticed the lack of communication as well.

Hernandez and her husband have owned Mi Pais for 15 years but had rented out operation of the business in 2013. When the couple came back to run the store in March 2017, Grace noticed a dramatic change in the community.

“Everything was chaotic. Everything was a mess,” Hernandez said, noting the unabashed drug dealing and prostitution that took place on Greenfield Avenue and the resulting needles and discarded clothes and makeup.

She said she circulated in the neighborhood hoping to find other concerned citizens but instead found many to be resigned to the criminal activity.

Her complaints to city officials fell on deaf ears. She said the officials attributed the changes in the neighborhood to nearby construction pushing criminal activity into Walker Square.

She found the tolerance of criminal activity mystifying, and began helping to organize in the area. She hopes events such as the cleanup help bind the community together in the face of adversity, with or without city assistance.

“Everybody gets to know everybody. So nobody feels alone in this, and people don’t feel overwhelmed by the neighborhood problems. Because when you feel alone, you want to give up,” Hernandez said.

“We want to encourage people. We want people to know that we’re here.”

The crowd continued to grow as the morning turned to afternoon, and the cleanup effort transitioned to a block party. The city shut down the stretch of 14th Street between Greenfield Avenue and Orchard Street, and children hollered and ricocheted about in a bounce house, while a Mi Pais food cart provided hot dogs for the community. The atmosphere was at once both celebratory and defiant.

Isa Young Jr. walked up to the block party through an alley with a full garbage bag. The soon-to-be freshman at nearby South Division High School had been independently scouring the neighborhood for refuse. His motives were simple.

“I want to make my block better. I want it to be a clean and safe environment,” Young said.

Despite the social problems confronting him and his neighborhood, Young was happy to be out in the community, making an effort.