By Edgar Mendez, Milwaukee Neighborhood News Service - Jun 20th, 2018 10:39 am
Get a daily rundown of the top stories on Urban Milwaukee 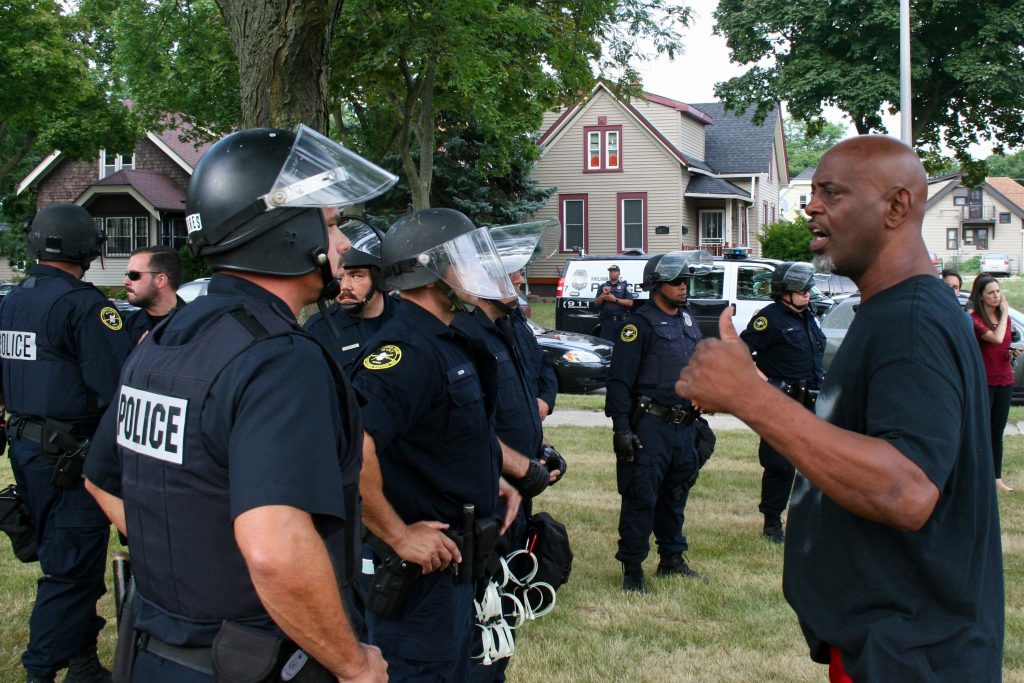 Officers talk to a man in the Sherman Park neighborhood during the August 2016 unrest that followed the police-involved shooting of Sylville K. Smith. Photo by Jabril Faraj.

When many cities, including Milwaukee, exceed their budgets for settlements and judgements related to police misconduct, they utilize taxpayer-funded bonds with high interest rates to cover the costs of lawsuits. This creates an avenue for banks and investors to profit from police brutality, according to a report released Tuesday by the Action Center on Race & the Economy (ACRE).

The release of the report comes the same day a civil rights lawsuit on behalf of Milwaukee Bucks player Sterling Brown is expected to be filed in federal court. Brown was thrown to the ground and tased while being arrested for a parking violation on Milwaukee’s South Side in January.

According to the ACRE analysis, banks and investors have profited to the tune of $3.7 million, the amount of interest and service costs collected on $26 million in “police brutality bonds” issued between 2008-2017. That brought the total cost to taxpayers to $29.8 million. 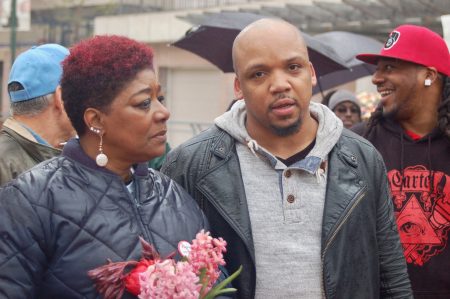 Maria Hamilton, the mother of Dontre Hamilton, stands with supporters in Red Arrow Park on Dontre Day 2016. The Common Council approved a $2.3 million settlement for Dontre Hamilton’s son in May 2017. Photo by Andrea Waxman.

ACRE is a national racial justice and Wall Street accountability campaign based in Chicago. The police brutality bonds are actually municipal bonds issued by local governments in which banks serve as underwriters. Banks then facilitate bond sales to buyers, the report states.

The study examined the increasing cost of police brutality in 12 counties and cities, including Milwaukee. Each took out millions in bonds to cover settlements, with Chicago borrowing $709 million and paying $1 billion in interest between 2010-2017. The report found that rather than serving as a deterrent for abusive policing, high settlement payouts “appear to be an acceptable cost of business of policing for cities and counties across the country.”

Furthermore, the report states, violent police officers and their departments are shielded financially from lawsuits, settlements can function as hush money and there is a lack of transparency and disclosure about the practice of bonding to cover police brutality settlements.

A Milwaukee case-study included in the report described the city’s borrowing as “habitual,” finding that it authorized loans for settlements in eight of the past 10 years. The report notes that Bank of America, Wells Fargo and other firms have collected more than $260,000 for their services related to police brutality bonds in Milwaukee.

Local cases cited, in which  bonds were used to finance settlements, included that of Chante Ott, who received a $6.5 million dollar settlement after spending 13 years in prison for a murder he didn’t commit; a $5 million class-action settlement for illegal body cavity searches; and $2.5 million paid to a woman who was strangled and raped by a Milwaukee police officer after calling 911 for help.

According to the report, Milwaukee budgets $1.2 million each year to cover police settlements and judgements, yet in 2017 authorized $7.4 million in payouts and other expenses.

Bonds also cover the costs of defending officers accused of misconduct in court, including Zachary Thoms and David Letteer, who were brought to trial for their roles in the 2011 death of Derek Williams, 22. Williams’ death was recorded by an in-squad camera that captured officers ignoring his repeated claims that he couldn’t breathe. Neither officer was disciplined as a result, though the Common Council authorized a payment of $23,000 to settle the claim.

The report also addressed the Department of Justice investigation into MPD patterns and practices and the American Civil Liberties Union lawsuit related to 350,000 unconstitutional police traffic and pedestrian stops. The city and ACLU reached a tentative $1.9 million settlement of that lawsuit in April.

The report made several recommendations for cities, including prohibiting banks and private investors from profiting from police violence and forcing officers to take out individual liability insurance policies to cover the costs of settlements. The report also called for full transparency concerning officer actions that lead to settlements; if or how they are held accountable; and who is profiting from the payments.