By Luke Schaetzel, Wisconsin Center for Investigative Journalism - May 25th, 2018 10:09 am
Get a daily rundown of the top stories on Urban Milwaukee 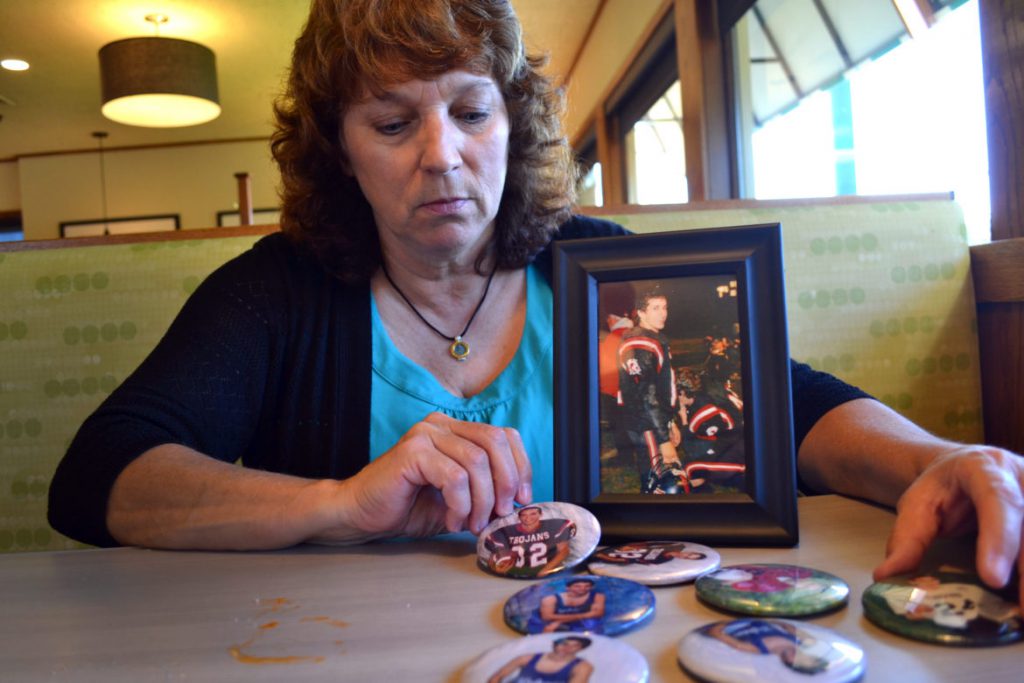 Debra Pyka, whose son Joseph Chernach took his own life at the age of 25 after suffering from chronic traumatic encephalopathy, now believes no parents should allow their young children to play tackle football. “What good is that scholarship going to do if you have brain damage?” Pyka asked. Photo by Erik Lorenzsonn/The Cap Times.

Debra Pyka did not know the true risks of football when she decided to allow her three sons to play youth tackle football. Her son Joseph Chernach started playing at the age of 11 in Wisconsin’s Pop Warner football league.

He played youth football for four years, then four years at Forest Park High School in Crystal Falls, Michigan, in the Upper Peninsula.

After spending two years at Central Michigan University as a student, Chernach was forced to move back to his mother’s home in Hixton, Wisconsin, as depression, mood swings and erratic behavior made it clear something was wrong.

Pyka remembered one afternoon as she brought the laundry downstairs. A news report on TV was covering the 2012 suicide of All-Pro linebacker Junior Seau. Seau suffered from the degenerative brain disease, chronic traumatic encephalopathy.

At the time, Pyka had never heard of CTE. The disease has now been linked to repeated concussions or subconcussive blows to the head.

“He was watching Junior Seau’s death being talked about on TV and I said to him, ‘What’s going on with all these NFL players dying?’ He never answered me. He just stared at the TV,” Pyka said.

About one month later, her son took his own life. It was later determined that Joseph Chernach suffered from moderate to severe CTE. He was 25. 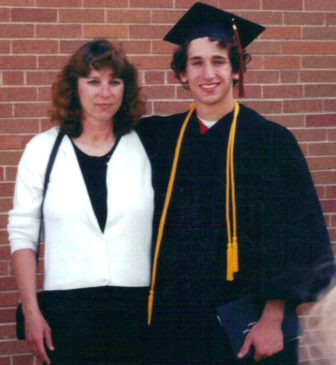 Joseph Chernach is pictured here with his mother, Debra Pyka, at his high school graduation. Chernach played youth and high school tackle football for eight years. Pyka blames the sport for her son’s chronic traumatic encephalopathy, which she says led to his suicide in 2012. He was 25 years old. Photo courtesy of Debra Pyka.

If she could go back with the knowledge she has now, Pyka said, “I never would have let my three sons play tackle football. I would have had them play flag football. But they didn’t have flag football at that time.”

“I should have said no,” she added. “A decision I will regret the rest of my life.”

Nowhere has the concern over concussions in sports been felt more strongly than in youth football. In Illinois, the Legislature considered but failed to pass a ban on tackle football for children younger than 12. The bill was named for Dave Duerson, a former NFL player who shot himself in the chest in 2011 after suffering from the effects of brain injury. He asked that his brain be donated for research.

Other states, including California, Maryland and New York, debated but did not pass similar proposals this year. Dr. Bennet Omalu, the pathologist whose discovery of CTE was made into the movie “Concussion,” has equated youth tackle football to “child abuse.”

Pyka sued the Pop Warner youth football organization in 2015 for $5 million in the U.S. District Court for the Western District of Wisconsin. The suit claimed the league “knew, or should have known that tackle football was dangerous for children,” but failed “to warn children and parents of the risk of permanent brain damage.”

The case was settled out of court for an undisclosed amount in 2016.

Two mothers in California are also suing Pop Warner, arguing their sons, who were diagnosed with CTE after their deaths, were injured while playing youth football. It is thought to be the first such case involving youth football to go to trial, according to the San Diego Union-Tribune. 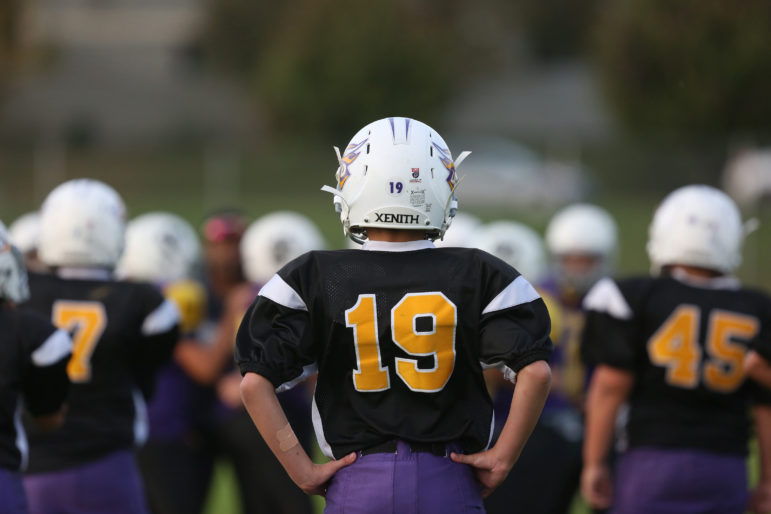 A youth football game is played at Warner Park in Madison, Wis., on Oct. 18, 2017. Leagues around the country are considering changes to the game to reduce brain injuries. Photo by Michelle Stocker / The Cap Times.

Bart O’Shea, president of the Dane County Area Youth Football League, has seen the sport change completely from when he played and safety was an afterthought.

“Compared to what we are doing now … I played in the middle of the Dark Ages,” said O’Shea, who played youth and high school football in the late 1970s to 1980. “I mean we had full contact, full blast. We had no water and no trainers.”

According to O’Shea, participation in the league has dropped about 15 percent in the past four or five years.

Nationwide, high school football participation has also dropped — by 25,901 players or 2.5 percent in one year, the National Federation of State High School Associations reported in 2017. Nevertheless, “Football remains the No. 1 participatory sport for boys at the high school level by a large margin,” the federation said. 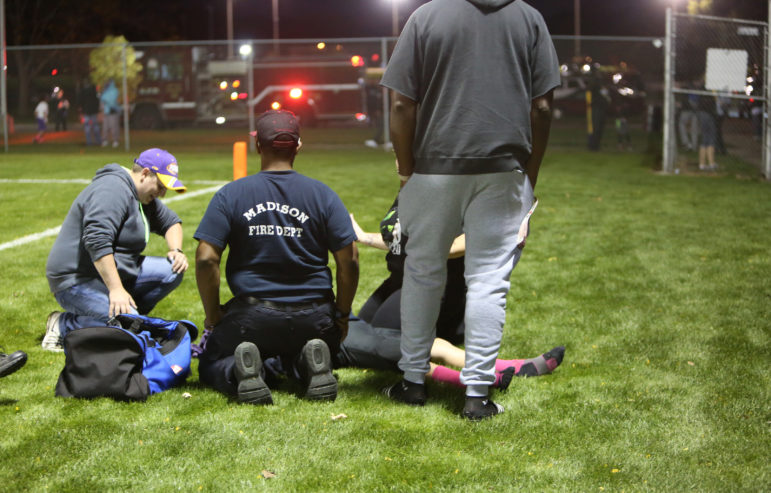 Coaches tend to a player with a bruised collarbone at a football game in Warner Park in Madison, Wis. on Oct. 18, 2017. A handful of states, including Illinois, have debated whether to ban tackle football for children under age 12 over concerns about brain injury. Photo by Michelle Stocker / The Cap Times.

“It ultimately comes down to what value do you put on your son or daughter’s experience in the program as to what the risks of a concussion or injury might be,” Tennis said.

At practice, the only full contact that occurs now is in a foam pit to teach tackling fundamentals.

But practices aimed at improving safety at the youth level can be erased by the style of football children see from college and professional players on TV, O’Shea said, describing it as “Guys just using their bodies as arrows and just trying to put the maximum impact on another person.”

Traditions also can stand in the way of making the sport safer, he said. O’Shea said the league had looked at starting “padded flag football” at the lower levels of tackle in which the children would never be taken to the ground. According to O’Shea, the idea was shot down “because people are big fans of traditional football.”

Now the league is looking at a USA Football program called rookie tackle. The field is narrower and shortened to 40 yards. But O’Shea does not believe it will “significantly” affect the safety of the game.

Another change being implemented by Dane County Area Youth Football is requiring an emergency medical technician or athletic trainer on the sideline for every game. Coaches will still decide if a child goes back in after a potential injury, and they are being counseled to err on the side of caution, O’Shea said. 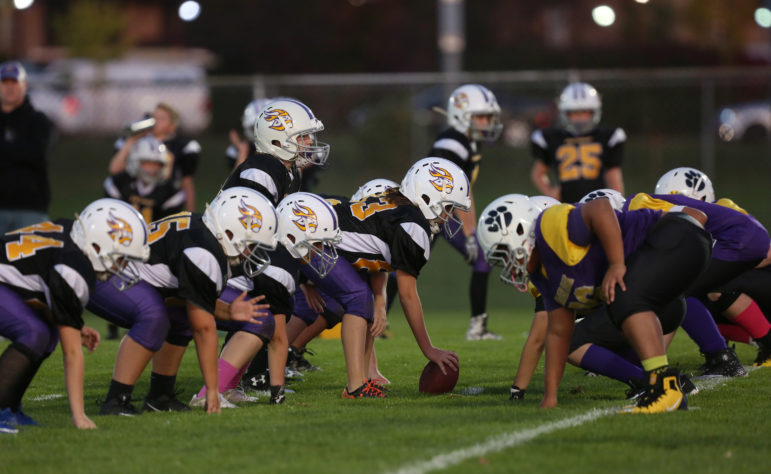 Sixth graders play at Warner Park in Madison, Wis., on Oct. 18, 2017. Participation in youth tackle football has declined recently in part because of concerns over brain injuries. Photo by Michelle Stocker / The Cap Times.

But having athletic trainers is not a perfect solution. He recalled an instance a few years ago while coaching a seventh grade team. A player walked off the field, stating he could not see. After the child’s sight came back “the athletic trainer came over and she talked to him for about five minutes and she says, ‘I think he is good to go back in the game.’ ”

O’Shea declined, telling the player he needed to see a doctor.

According to the Sports and Fitness Industry Association, flag football saw a 6.1 percent increase in participation in 2017, as interest in such “casual” sports increases while “core” sports, such as tackle football, are declining.

As a high school coach, Tennis sees the value in youth flag football as a way to limit the number of repeated blows to the head.

“We know that if we put you in pads and have you start tackling, we are putting you at greater risk of concussion earlier in life, the chances of you having more concussions as you play football is inherently greater,” Tennis said. “So I am totally okay in saying I am totally fine with playing flag football in fifth, sixth, seventh and maybe even eighth grade; I don’t see any harm in that.”

As enticing as a college football scholarship may sound, Pyka said no parents should allow their children to play tackle football.

“What good is that scholarship going to do if you have brain damage?” Pyka asked.

“What kind of a future is their kid going to have with brain damage? Do parents have to be a child’s caregiver when they are in their 20s and dying an early death?”

Luke Schaetzel, a recent University of Wisconsin-Madison journalism graduate, is a freelance reporter based in Madison. Wisconsin Center for Investigative Journalism Managing Editor Dee J. Hall contributed to this report. The nonprofit Center (www.WisconsinWatch.org) collaborates with Wisconsin Public Radio, Wisconsin Public Television, other news media and the UW-Madison School of Journalism and Mass Communication. All works created, published, posted or disseminated by the Center do not necessarily reflect the views or opinions of UW-Madison or any of its affiliates. The Center’s collaborations with journalism students are funded in part by the Ira and Ineva Reilly Baldwin Wisconsin Idea Endowment at UW-Madison.