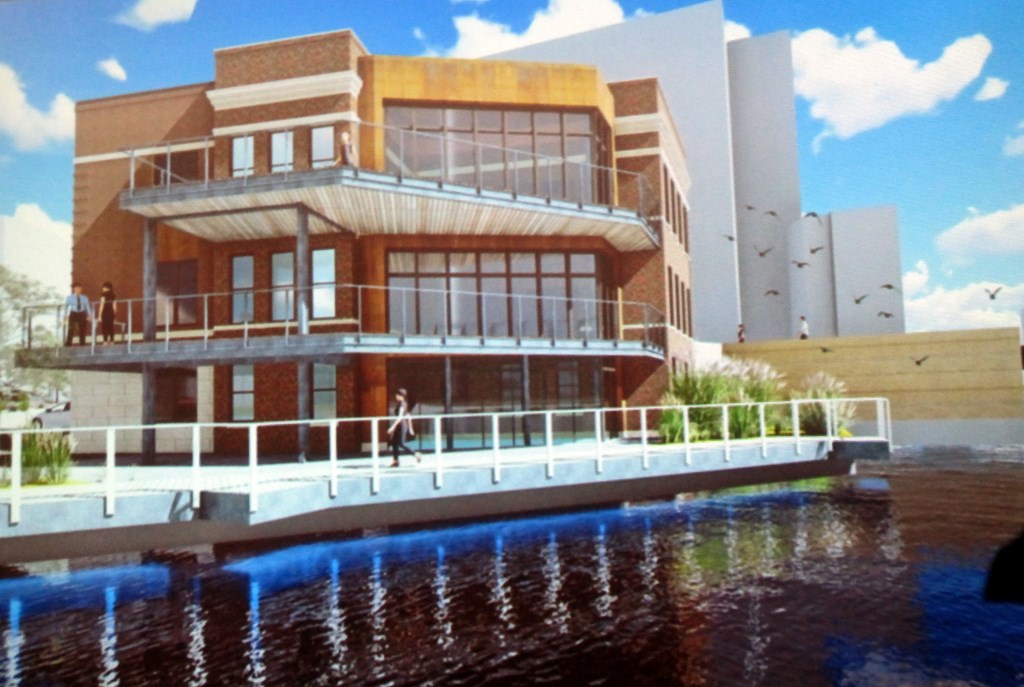 John Wimmer and his brother Mark Wimmer are fifth generation builders, with a sixth already working at Wimmer Communities, LLC, the family business that employs 160.

Wimmer Communities owns and operates 30 rental properties, all of them in suburban locations ranging from Menomonee Falls to the north, Pewaukee to the west, Hales Corners to the southwest and Oak Creek to the southeast. You’d figure that landlords who own pools, 24-hour fitness centers, a 100-acre golf course with a 6,200 square foot clubhouse and other dazzling amenities would be happy to enjoy them with their tenants.

But one can take noblesse oblige only so far, and sometimes it’s best to disport oneself strictly within the family circle. Therefore the Wimmer brothers intend to create their own family retreat, which will be about 2,000 square feet larger than the clubhouse at The Pinnacle at Brookfield Hills, and considerably more private.

Instead of locating in any of the four communities mentioned above, or in Waukesha, New Berlin, Greenfield, West Allis or Greendale, where their firm’s other properties are, the brothers have decided to create their pied à l’eau at the 1915 Engine House 15, located at 105 N. Water St. The old building served as the headquarters of the city’s water-borne fire fighting fleet, and for other municipal functions. Its final use was as a lifeboat station in 1984.

The Historic Third Ward Architectural Review Board approved on Wednesday, February 21st, the brothers’ plans for the adaptive reuse of and addition to the structure, which is listed on the National Register of Historic Places. With the completion of the renovation, the building will enter the honor rolls of unusual homes in Milwaukee. The suburbs have got nothing on it. Good luck trying to find a historic fireboat station to renovate in Hales Corners! 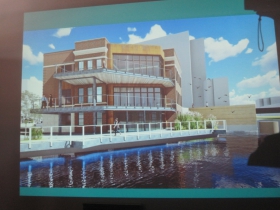 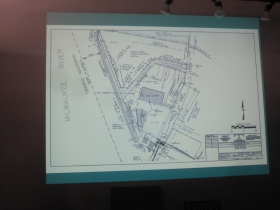 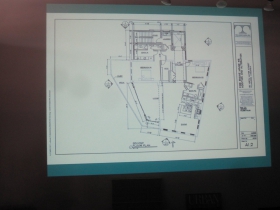 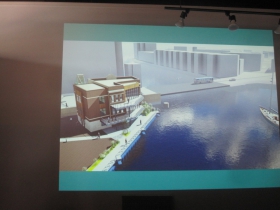 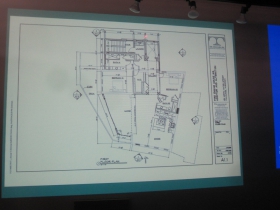 Listen to the lyric poetry of the real estate advertisement announcing the property’s availability for $2.7 million — a mere $2 million over its assessed value. A steal!:

Finally….it’s available. You know which one. Right there—the little building next to the bridge that has everything except a flag on its flagpole. Now is your chance to sidestep urban anonymity. … If it’s time for a personal and/or professional paradigm shift in your life, make it happen and fly your own flag at fire engine house 15 in downtown’s premier live-work-play-learn community of the Historic Third Ward.

The paradigm-shifting brothers plan to work expeditiously to convert the structure, said Mark Wimmer, whose presentation to the ARB was the second for the project. The proposal was first raised in January, when Wimmer told the board that he planned to modify the interior of the building, as well as to add a “small addition” to the north of the structure to include “access, stairs, bedrooms, bathroom and an elevator to all three floors.” Wimmer also plans to expand existing balconies on the structure.

The board told Wimmer to come back with a few minor changes to the plans for the building, and he did so at the Wednesday meeting.

Among his changes was that of a cornice on the building. There was originally a cornice on the building, since removed. Wimmer at first planned a rather broad cornice for the original structure, but further research showed an image of the more restrained, original, which is to be reproduced as nearly as possible with “quality, durable materials,” as the board requires. The cornice is to be metal, Wimmer said, and will “be consistent of the original stepping. It is much more shallow” than that originally proposed, he said. Board member Greg Patin approved of the minor change, adding that “it is the small details that make a big difference.” (The area where the cornice had been removed is easily discernible today by the different color of the brick employed.)

Attention to such small details may also serve as a justification for having an architectural review board in the first place.

Wimmer also plans to do a bit of work on the front door, which is a key architectural detail of the building. Right now it is a hinged, operable door with a clear glass window, although you wouldn’t know it by the amount of salt spray accumulated on it.

Wimmer’s plans for the building’s interior include decommissioning the door and building a wall behind it. He asked the board for approval to replace the clear glass with hammered opaque glass, and would replicate the painted address on the transom.

Ald. Bob Bauman was concerned lest the door be lost, but Wimmer assured him it would remain a hinged door — in fact it would be the same door, and its hardware would be retained. Wimmer also thought it would be a nice touch to add a historic logo to the door, and through research he was able to discover a period-appropriate Milwaukee Fire Department logo to be painted on the door. The “105” on the transom, announcing the building’s address would also be replicated.

It is worthwhile to note that “105 N. Water St.” was not the building’s address until the street name changes of 1931; the building was originally denominated as 187-E. Water St. according to the old style. Thus, the address painted on the transom dates to after that milestone.

Members unanimously approved the plans, and Wimmer says he hopes to get under way with the changes soon. After all, Summerfest is right around the corner, and who wants to drive all the way home to Pewaukee after a night at the Big Gig? As a bonus, the Wimmer family will be able to wave across the bridge on the other side of the river at their neighbor, House Confidential honoree Alex Lasry. 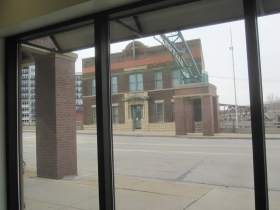 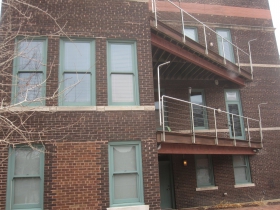 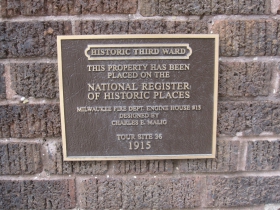 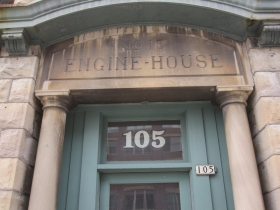 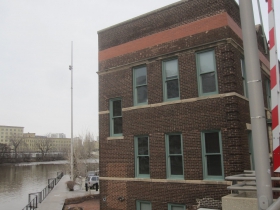 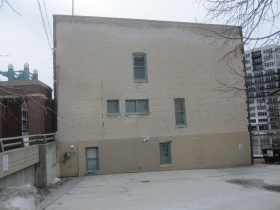 The ARB meeting was the first to be held in the new headquarters of the Historic Third Ward Association/Business Improvement District #2, now located at 525 E. Chicago St. in a ground floor space briefly occupied by Leslie Hindman Auctioneers. The organization, chartered in 1987, previously occupied quarters in the Phoenix Building, 219 N. Milwaukee St. 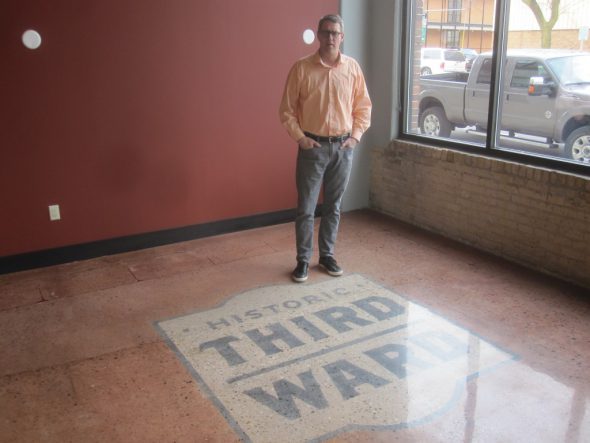 “This is a game changer,” said architect Matt Jarosz, the Architectural Review Board Coordinator, as he surveyed the place prior to the meeting. The interior cement floor has been cleverly refinished, while allowing an old excavation’s scars to remain, adding character. The polished and stained flooring was done by Excalibur Flooring, a Mequon company. Particularly ingenious is an image of the Historic Third Ward’s logo proudly displayed on the lobby floor.

Executive director Jim Plaisted opened the door to an adjacent utility closet, whose floor had not been refinished, and the contrast was stunning. It was as if the floor of a gas station garage had been transformed into that of the Villa Romana del Casale.

In addition to a floor, the new place has ceilings and columns, all made of reinforced concrete, as was the case of the previous headquarters; both date to about 1916. A number of open offices take advantage of the generous windows of the building, reducing the need for artificial illumination. The walls, painted in a grey and some kind of muted orange color, await decorations, and Plaisted assures the reader that there is plenty remaining for him to unpack.

The HTW joins other organizations in moving from hidden office spaces to prominent street-level facilities, including Historic Milwaukee, Inc., which now operates out of the Chamber of Commerce / Mackie Flats building, 235 E. Michigan St.