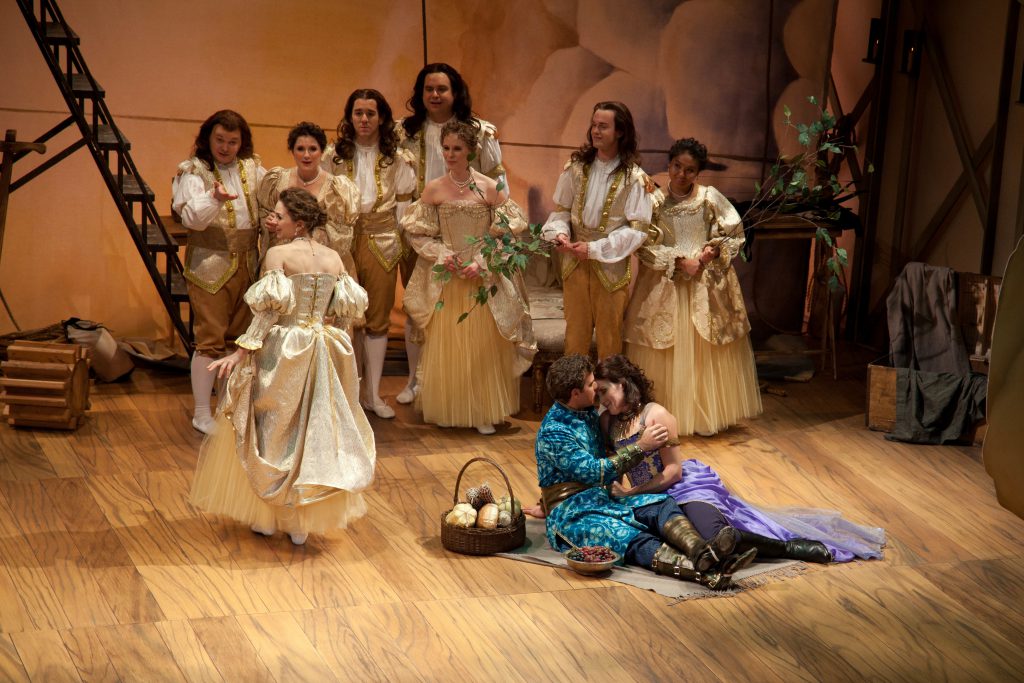 Photo by Kathy Wittman, courtesy of the Florentine Opera.

Two baroque one-act operas require a closeness to the musical performers and a staging concept that would have been lost in the cavernous 2,300-seat Uihlein Hall normally used by the Florentine Opera. So they were transferred for this weekend’s performances to the smaller sloped seating for 450 or so at Wilson Hall (formerly Vogel Hall) at the same Marcus Performing Arts Center. This was a smart tradeoff with some initial uncertainty until the audience discovered how much it liked the opportunities for up close and personal.

Love aimed high and left forlorn in mythical settings may seem the 17th century motivation that inspired the “fairie”-themed verse and static ornate presentation of both John Blow’s Venus and Adonis and Henry Purcell’s slightly later, more musically known Dido and Aeneas. But musical notation and indeed the actual messages are not as set in research as in traditional operas and modern musical study, so a lot of the decisions about performance style and delicacy are left up to the conductor and singers.

Which justifies the Florentine’s conceit. Performers for both operas casually gathered onstage laced up in 17th century dress. They pretended to fuss with their garments as courtiers would and then use masque-like dances and group singing in mock replica of a royal amateur hour devoted to classical myths of doomed love.

To this aim, set and lighting designer Noele Stollmack placed painted clouds to cover both wings, used primitive props and a sense of do-it-yourself lighting tricks (very effective) to suggest that theatrics without benefit of modern technology were making the thunder rumble and the court cavort.

This was a showcase for the ability of the lesser-known lights of the Florentine ensemble – at a company that usually makes a bigger deal of the imported artists. And there are certainly some marvelous imports here that both stand out and interweave with the ensemble in ways not that common at the Florentine.

Sandra Piques Eddy, the clear guest star of the event, is a mezzo of the top caliber, which includes a lower range that pins you to the back wall. In looks as well as insight, she flourished as Dido, the doomed queen, a role that responds to control, power and in Eddy’s approach a realistic base that adds dimension to the baroque manner.

Close behind her in musical skill – and running even in acting ability (few singers know how to use a flick of the eyes or a tilted brow to stay alive when listening) – was soprano Alisa Jordheim as both Venus and Dido’s confidante, Belinda.

But this was mainly an occasion for the selected Florentine chorus and studio artists to integrate and shine. On the big stage they are usually limited to pratfalling, Rockettes synchronization or fleeting roles, but here they were selected for tight chorales, thoughtful stage movement and some capable operatic acting (though there was some inconsistency there).

Former Florentine studio artist Leroy Y. Davis was kept busy in supporting roles in a number of Florentine’s big productions, but never came off as well as he did here, with big baritone openness and a new focus on maintaining acting presence as both Adonis and Aeneas, lovers doomed in different ways by the fickleness of fate and the gods.

Another guest artist, Randall Scotting, is an exceptional countertenor, perhaps overly impish and vocally showing off as a bulky Cupid in the first half — but then, he has a lot to show off. In the second half he had only one scene but was riveting in his stage command and vocal strength as he deceived Aeneas into abandoning Dido his love.

Speaking of deception, mezzo Colleen Brooks grabbed center stage with spear and malicious joy as a delightfully wicked sorceress. Floating in and out of the chorus, as do many in this production, was Rachel Blaustein, whose clear soprano often carried the plot in the Purcell piece.

Much of that sense of special care in the movement department, I suspect, flowed from choreographer Dani Kuepper (also artistic director of Danceworks, Inc.). She also performed in interludes with a modernized interpretation of courtier movement and arabesques, while the Florentine ensemble capably danced counterpoint – a physical dexterity the ensemble is normally not required to demonstrate.

Mainly behind the success was the grace of the music itself under visiting conductor Jory Vinikour. The musical lines with baroque opera are simpler and more repetitive than in modern opera, somewhere between choir and arias. Vinikour may be best known as a harpsichordist, and that instrument was surrounded by strings and even a theorbo (large lute). But he wasn’t just in charge of the strings and his keyboard. His fingers flew precise instructions simultaneously to baroque instruments and singers alike. And the sense of repetition built into baroque vocal passages was nicely varied and reconstructed.

The ensemble women seemed more at home in Christianne Myers’ period costumes than the men, but as the performance progressed, everyone got more comfortably into the tone and demands of the concept.

You could still pinpoint — mainly through acting and singing ease — the gap between the invited and the residents. Eddy and Jordhiem in particular have mastered techniques the others are just approaching. But the production remained charming and musically accomplished in its intimacy.