Has Tide Turned Against Republicans?

Last week’s elections show GOP could be vulnerable to right kind of campaign. 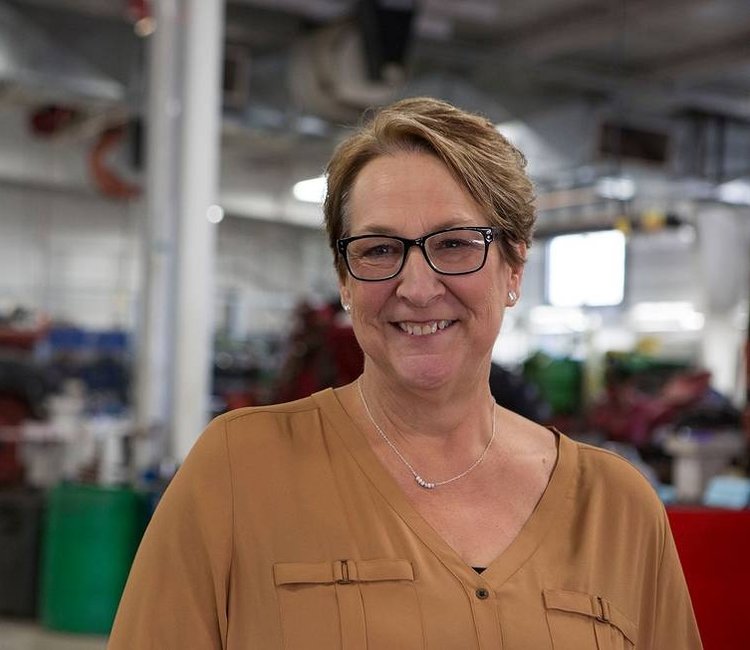 Following surprising results in Wisconsin’s tenth Senate District, both Emily Mills on the left and Christian Schneider on the right announced that the Wisconsin GOP is in trouble. Schneider warned that “if this week was a canary in the coal mine for Wisconsin Republicans, they better learn bird CPR pretty quick.” Like Schneider, Mills blamed President Trump: ”Having thrown in with Donald Trump, who currently sits at a 39% approval rating, the horizon looks distinctly stormy for Republicans.”

Wisconsin Governor Scott Walker sent out a series of tweets to Republicans: “Senate District 10 special election win by a Democrat is a wake up call for Republicans in Wisconsin.” Former Governor Tommy Thompson joined the chorus of doom in a talk to Republicans celebrating the anniversary of Trump’s inauguration. “We’re going to have one hell of a tough fight on our hands and I’m not going to sugarcoat it, because they are much more organized, much more energized and much more passionate,” he said, referring to the Democrats.

The reasons behind these reactions were the results in two Wisconsin legislative districts. In the first, Senate District 10, Democrat Patty Schachtner won the race even though Republicans had long won the district. The chart below shows the results in the four elections since the boundaries were redrawn following the 2010 census. Up until this year, the district shows every sign of being safely Republican. 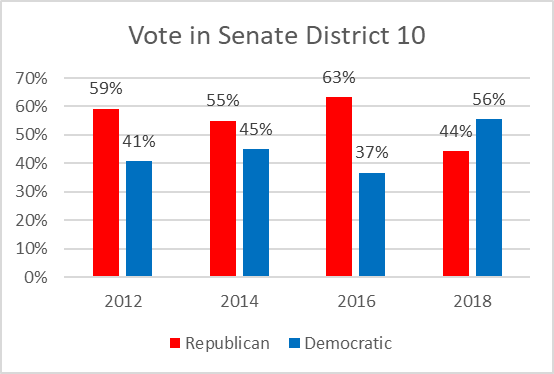 The 2012 and 2016 elections were easily won by Republican Sheila Harsdorf. Lacking a senate race in 2014, I have shown the district’s results for the contest for governor, in which Walker won the district by ten points. A special election was called for January of this year, following Harsdorf’s appointment as Secretary of Agriculture in the Walker administration. Here is a map of the district:

In the second of these races, for Assembly District 58, centered on West Bend, the Democrat lost. However, he did far better than one would expect from previous races, as shown in the chart below. The district is so favorable to Republicans that normally no Democrat has contested the seat. Instead the chart shows the results in presidential and gubernatorial elections. 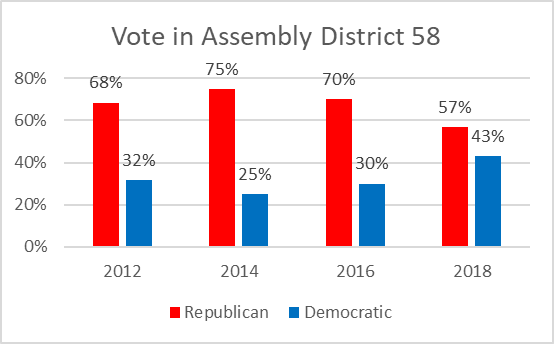 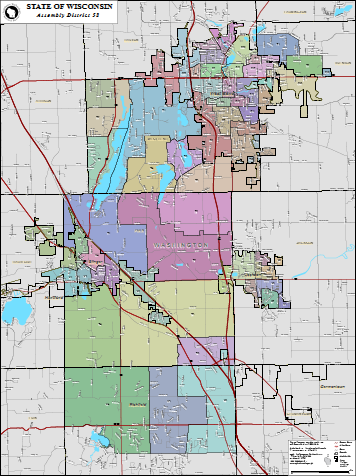 And here is a map of that district:

The Wisconsin results are consistent with the results in other states over the past year. In most—but not all—cases Democrats have performed about 10 percent better than historical results would have predicted.

Yet, there are reasons to be cautious about using these results to predict results this coming November. One is turnout. In Senate District 10, the number of 2018 voters was only about 12 percent of the 2016 vote. This would imply that relative enthusiasm was a more important factor than a move to Democratic support.

As both Mills and Schneider point out, Trump puts many Republican office holders in a no-win situation. The website 538.com posts a continuously-updated summary of polls on Trump’s approval rate. These indicate that among all voters he is remarkably unpopular, implying that Republican candidates in competitive distrcts would be well-advised to distance themselves from him.

Yet, among Republicans, Trump remains popular. Reuter’s Polling Explorer allows one to apply various filters to the poll results of the Ipsos Poll. As the next chart shows Trump’s approval rating (in red) among Republicans has recently dropped somewhat but is still very high (73 percent to 26 percent disapproving). 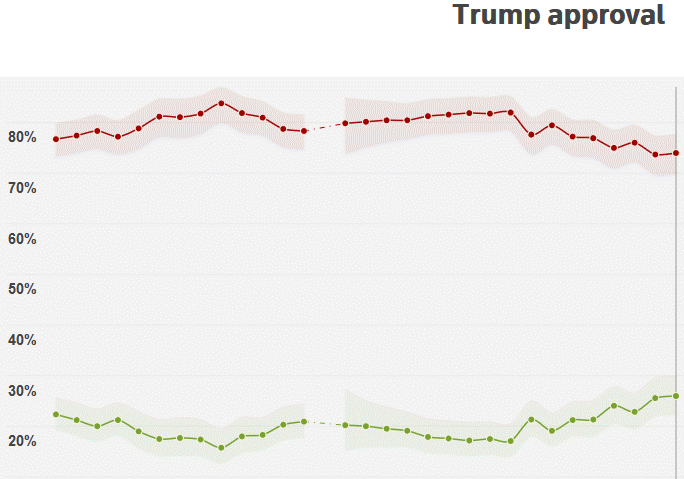 This creates an obvious quandary for Republicans facing a competitive election. Distancing oneself from Trump in hopes of winning the general election may leave one open to a successful primary challenge.

Shortly before the election both Urban Milwaukee and the Journal Sentinel published estimates of spending on the 10th District election. Both listed Americans for Prosperity, the Realtor-affiliated Wisconsin Homeowners Alliance, and Wisconsin Manufacturers & Commerce among outside groups supporting Jarchow. The Journal Sentinel listed Jobs First Coalition founded by former Assembly Speaker Scott Jensen and the Republican State Leadership Committee as other conservative groups active in the race.

Liberal groups were also active, but outspent. Greater Wisconsin spent $30,000 on digital ads, according to both articles. Post Cards to Voters recruited volunteers in other parts of the country to send handwritten postcards to voters in Wisconsin.

It appears that Schachtner was substantially outspent, particularly when the outside groups are included. In Schachtner’s view, the spending by conservative groups was counterproductive. In an Interview following the election, Schachtner attributed her victory to a reaction to these mailings. “It wasn’t nice. It was mean. People just said, ‘You know what? We’re nicer than that.”

The same Journal Sentinel article strongly implied that neither Democrats nor Republicans expected the Democrat to win. It quotes Jenni Dye, executive director of the State Senate Democratic Committee, as hoping for a strong showing. “That’s going to be a sign that 2018 is headed in a good direction for Democrats.”

The executive director of the state GOP was quoted as arguing that Democrats were already trying to cover for a potential loss in the race. “If they are unable to convert a competitive race into a win … I don’t think it bodes well for them.”

It is worth noting that Adam Jarchow, the Republican candidate in senate District 10, issued a remarkably gracious concession tweet: “I just called Patty Schachtner and congratulated her on her victory tonight. I look forward to working with her as our new state Senator.” Schachtner responded in kind.

It appears from her website that Schachtner ran a notably canny campaign, one that may serve as a model for Democratic candidates, particularly in districts that Trump won in 2016. She exploited voters’ weariness with increasing partisanship in Wisconsin, effectively exploiting the attacks from the outside conservative groups. She listed her priorities as improving access to health care and helping drug addicts get treatment. After the election, she resisted attributing her success to opposition to President Donald Trump, keeping the door open to Trump voters. If it is true, as she suggests, that the campaign from outsiders created a backlash, that is an  optimistic sign for the future of our democracy.

20 thoughts on “Data Wonk: Has Tide Turned Against Republicans?”