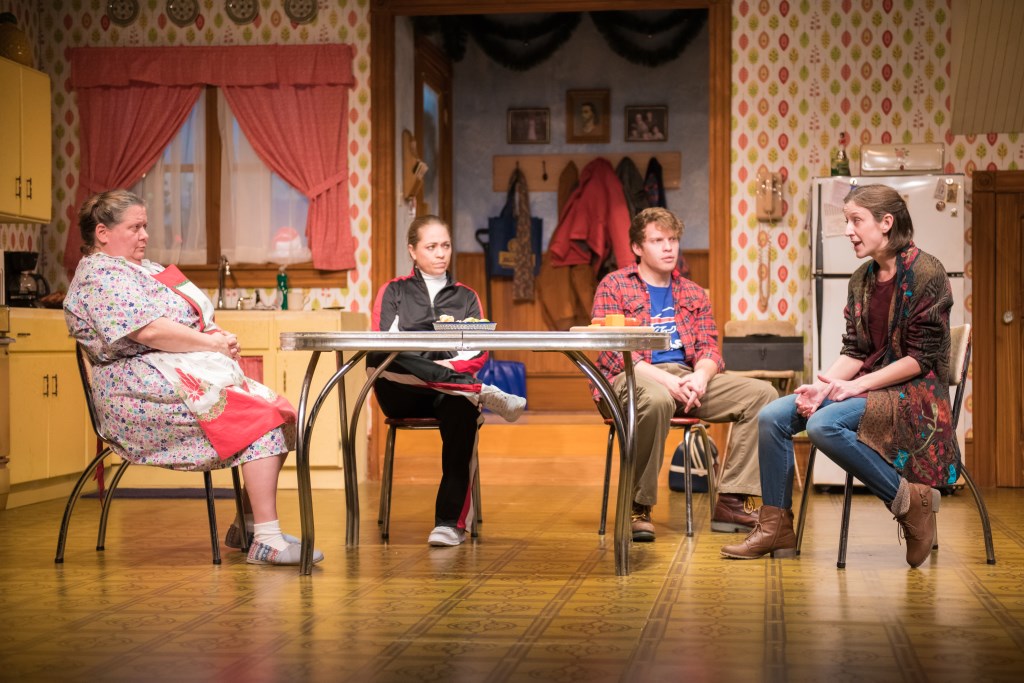 Each holiday season there is a glorious quest for the holy grail among all local arts and theater groups: the search for a Christmas perennial as enduring as A Christmas Carol has proven for the Milwaukee Rep for 41 years at the Pabst Theater, as beloved as the annual TV screening of the movie It’s a Wonderful Life (which has also been attempted locally as a stage adaptation) and as big a family favorite as The Nutcracker (all hail Tchaikovsky) for the Milwaukee Ballet.

That’s a hard list to crack. But each season, local groups try and try again for something that can at least return seasonally as both a holiday and aesthetic winner. Next Act didn’t try this year. The Skylight relies on famous family Broadway fare like Annie. In Tandem Theatre, after having tried to establish A Cudahy Christmas Carol, has switched to a high comedy Scrooge in Rouge. Acacia Theatre offers Jacob Marley’s Christmas Carol – and interestingly all the variations, openly borrow from Dickens’ A Christmas Carol.  They bend the knee to the king.

That includes the Milwaukee Chamber Theatre’s new offering through Dec. 17, a comedic family drama with a title that sounds pure Milwaukee — except it’s pure Buffalo: Miracle on South Division Street presented on the studio stage of the Broadway Theatre Center.

This play could be right here – a fading shopping district and Polish working class family, a familiar bowling and baking Catholic clan from World War II immigrant roots and quite familiar religious prejudices. We are back in the world where good Catholics didn’t date Jewish girls or slip away from weekly mass. You’d better remember that world if you want to chuckle at the revelations. Or be surprised that such ancient generalities have any kick left.

Playwright Tom Dudzick and artistic director C. Michael Wright are both from Buffalo and enjoy mining the similarities of their youth. You’d swear set designer Stephen Hudson-Mallet had raided a local Riverwest kitchen for the furniture and costume designer Debra Krajec had shopped Goodwill for accuracy. Their crafts are more difficult than they look.

Dudzik is a veteran of seasonal stage offerings. His Nowak family lives off a legend that the Virgin Mary appeared to their late grandfather, who commissioned a lovely statue that visitors drop coins in to pray for them while the homeless flock to a soup kitchen on hallowed ground.

If the play was as strong as the actors assembled, this would have a chance at becoming a seasonal Miracle. Anyone raised Catholic, or Jewish for that matter, will recognize the family types and confusion, but Dudzik hits too many stereotypical bells along the way, only partly rescued by some topical wisecracks that are not as funny as the actors who deliver them.

The cast is eking everything it can from the situations, operating with a relaxed comfort and affection for the popup types it has been handed. If there is a realistic chord to be struck, they find it. A fresh chord? That would have been up to the writer, though director Wright tries to help by moving the cast of four nimbly around the busy kitchen table.

Kat Wodtke has wonderful directness and frank humor as daughter Ruth, trying to hide some secrets, forced to handle each plot unwrapping after almost endless sidesteps by Dudzik trying to be funny or subtle in the exposes. Greta Wohlrabe as sister Beverly is spot-on as the wisecracking constant doubter who charges in like Thelma Ritter unleashed.

Josh Krause is the “go along get along” laid-back brother Jimmy, who becomes the audience’s voice as he makes honest mischief about his family’s behavior. Krause has a natural stage charm that fits this part perfectly.

The centerpiece matron, Clara, is the veteran Raeleen McMillion, who never misses a laugh or a heartstring pull anywhere near her in a performance better than the choppy character is written. Clara has to go through many changes in mood that the writer hasn’t connected, but the actress sure tries to, sometimes forcing us to remember a considerably less pliant Clara from a minute ago.

As the newly educated family faces its finale, Miracle on South Division Street intends holiday cheer — to make us leave in high spirits and goodwill toward all. If only acting alone could create a perennial. 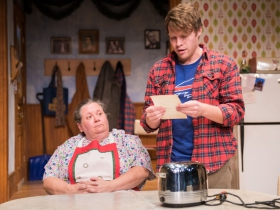 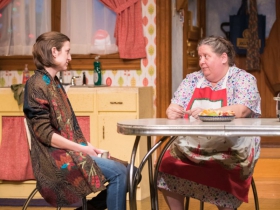 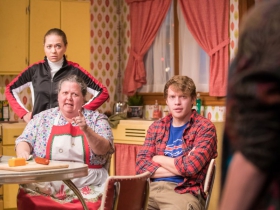 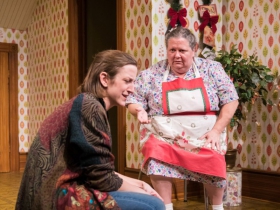 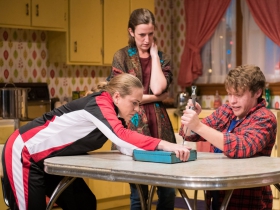 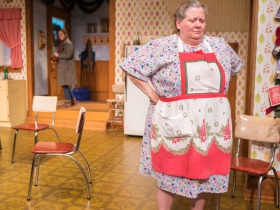