Working with MMSD to reduce polluted runoff, keep the beach and lake clean. 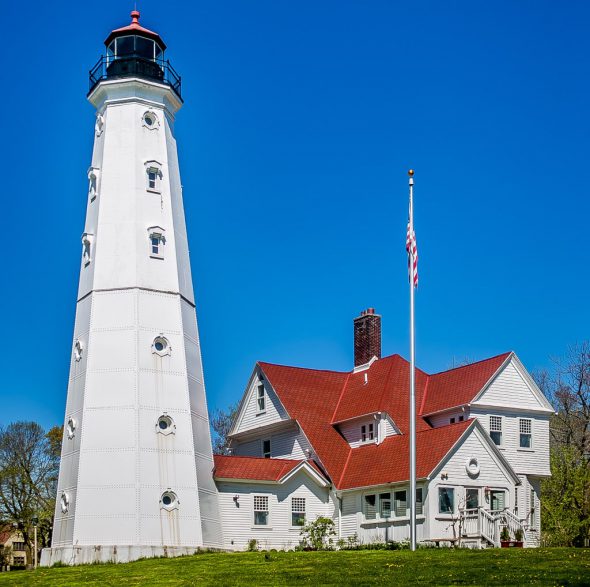 But officials with the Milwaukee Metropolitan Sewerage District (MMSD) say it will be a big help.

The North Point Lighthouse, 2650 N. Wahl Ave., is one of the latest entities to partner with MMSD in seeking out meaningful solutions toward keeping Lake Michigan and its beaches as pristine as possible.

This fall, MMSD and organizers within North Point Lighthouse Friends, Inc. took the wraps off some of the eco-friendly practices with the release of a video outlining steps they hope will protect what lies down below the 129-year-old landmark.

The collaborative effort included input from MMSD, the UW-Milwaukee School of Freshwater Sciences and outside experts. A combination of grants and fundraising made the work possible.

After a multi-year process of exploring stormwater runoff options, North Point organizers decided to undertake several traditional methods — and one that is relatively new to Wisconsin.

Bill Graffin, public information manager with MMSD, describes the various steps in place as “natural solutions” and said they bring the capability of managing more than 70,000 gallons of water when it rains.

“That might seem small, but it’s not,” Graffin tells Urban Milwaukee. “Polluted stormwater runoff is the biggest threat to clean rivers and lakes in the United States.”

A technical process known as Regenerative Stormwater Conveyance (or RSC) has been used to manage how water is flowing from the lighthouse grounds down to Bradford Beach. RSC has been around about a decade, but is relatively new to the Midwest; to date, it has been used predominantly along America’s east coast.

At its core, RSC results in the creation of a series of interconnected rain gardens, essentially guiding rainwater that falls around the lighthouse’s grounds to a larger rain garden down below, along Lincoln Memorial Drive.

As part of the design, native vegetation adjoining the rain gardens also is in place to consume some of the water as it makes its way down — filtering it of such pollutants as bacteria, which have been a common culprit causing the closure of Bradford and other beaches in the region over the years.

Graffin says MMSD has been working with organizations such as North Point Lighthouse Friends to seek out meaningful solutions to managing stormwater.

“We need a lot of help,” Graffin says. “The district can’t afford to do all of the work. There are a lot of different things people can do. They are a lot of techniques — some of them can be done quite cheaply.”

As it turns out, North Point Lighthouse Friends was looking to implement new stormwater management techniques on the grounds around the same time MMSD officials reached out to the organization a few years back.

John Scripp, president of the lighthouse, outlines why stormwater management became a focal point of the organization’s mission in recent years.

“We saw the Bradford Beach restoration occurring and learned the science about where the contamination was coming from,” Scripp says in the newly released video clip. “It was closing the beach, it was coming from local stormwater.”

The lighthouse happens to be situated between two ravines — a scenario that means stormwater is accustomed to heading straight down to the beachfront whenever heavy rainfall occurs. This realization, Scripp says, provided the organization with a sense of responsibility.

“We could see the dots being connected,” he explains.

In addition to using the RSC techniques, North Point Lighthouse installed a new driveway, made of porous pavement. The slits between the pavers also absorb some of the stormwater before it can even begin its downward dissent.

“If you want to preserve the lake,” Scripps says, “tell people that this sort of thing should be important to them, wherever they have stormwater.”