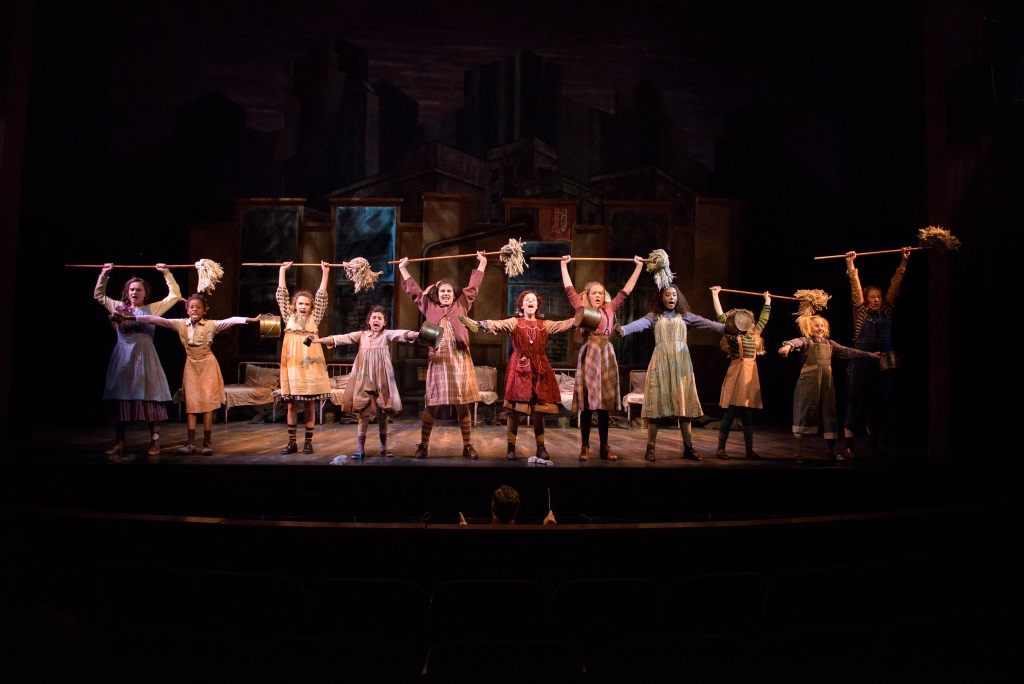 Annie is a stage wonder. Has been for 40 years, but it’s not been the same over four decades because we as audience and America as the target have changed.

A lot of road show and community theater Annie’s have passed my way since I saw the original cast on Broadway. The current Christmas production through December 27 at the Skylight’s Cabot Theater is in good company with the original, both for veneration and modernity. The one at the Skylight, however, clarifies how far we have come in copying and then retouching the original Broadway print. It was worked out with local children, local professional actors and double, even triple duty by the local ensemble.

The melodies by now are standards for the young and old who at my matinee inadvertently hummed along with music director Bill Busch’s hard-charging pit band overture. The plot remains its creaky self with some new facets that director Molly Rhode has shined up or else they’ve just grown on me.

Forty years ago, only a critic from Milwaukee would dare blast the supposedly sophisticated Broadway audience for being as much a sucker for dogs, orphans and schmaltz as the rest of us. But they were and probably still are. The songs and lyrics by Charles Strouse and Martin Charnin now combine with the Skylight’s canny theater skills to bring touches of freshness to the familiarity.

Rhode will mainly be complimented for the speed and accuracy with which she handles such a big company – or the proficient kids she has found to stand squarely center and sing “Maybe.”

But she takes almost every expected turn of Broadway choreography and then shakes it up a little in the perambulating parade of characters. She tries to give some personality to the side players. Sometimes those are momentary bits selectively landed. Only occasionally does the show step over the line into calling attention to the shtick – and in “Annie” that takes effort to control.

Forty years ago, when Annie and Daddy Warbucks visited the White House and inspired the New Deal, that was just a cheesy laugh, seemingly included to drag us beyond a crisp first act. No one in the Carter era took it for anything but tongue-in-cheek FDR nostalgia.

Today the song wishing damnation on Herbert Hoover, the throwaway lines about callow New Yorkers, and Annie urging Democrats and Republicans to believe “the sun will come out tomorrow” and work together — well, that all sure has gained resonance and even topicality where once such optimism against all odds was dismissed as a comic-strip cliché.

And about those comic pages. The musical’s Little Orphan Annie was the three-dimensional body of a cartoon cutout everyone knew. It had lasted from the 1920s into the petering out 1990s, so those first audiences were aware of a cultural carryover. Today the audience mainly starts and ends with the musical, so the delight comes from the energy and the harmonics of the times and the message. The optimism is no longer borrowed from a cartoonist.

At the movies, where studio singing is quite different, the Annies seem to grow younger in age with each film version. But onstage, because of the vocal power required, the Annies have always been about 13 and while expertly miked have the same flair for theatrical singing the adults in the Skylight cast do.

My Annie of the spunky chin and powerful voice was KyLee Hennes. Other nights it will be Eloise Field. The dog and orphans are also double-cast – and I hope the second set of orphans is as energetic and committed as the first in making “Never Fully Dressed” a highlight of the show.

The adults play so many roles that costume designer Jason Orlenko must have a maniacal backstage crew flipping them in and out of clothing and wigs. Not to be outdone is Peter Dean Beck’s scenic crew – they must be stepping on themselves backstage to handle the period drops and slide-out sets. Take a moment to marvel how so few people can accomplish so much in so little time while staying on pitch.

As dance captain, Samantha Sostarich has little opportunity to show off as Lily St. Regis, but in ensemble number she and Rhode let “Star to Be” Katie Berg rule center stage. Matt Crowle as Rooster provides an oozing flexible grace and Diane Lane as private secretary Grace Farrell unleashes a lot of warm looks and some powerful vocals.

Andrew Varela plays Daddy Warbucks honestly – that is blustery and self-conscious about his affection for Annie.  And if you dared think that this is not an important singing role, baritone Varela will change your mind.

But the best and probably least applauded performance belongs to Carrie Hitchcock as Miss Hannigan. It’s understandable, particularly when the house is packed with kids. They are not going to laugh with a drunken self-centered meanie of the orphanage, no matter how delightfully she sings and prances around. But credit Hitchcock for recognizing how a full blown Hannigan harridan can become the clown turn the musical needs. 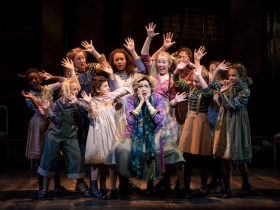 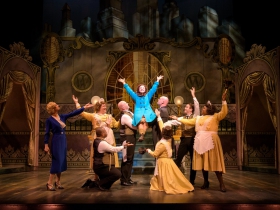 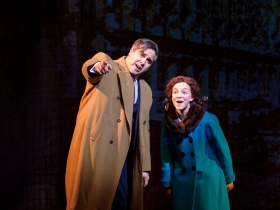 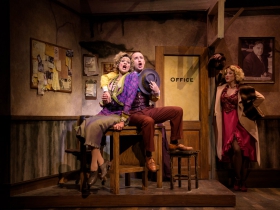 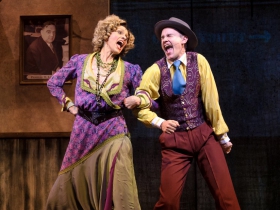 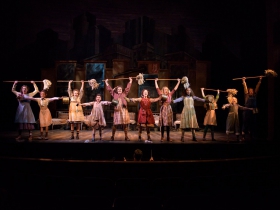