Wisconsin is a big contributor to gun crimes in Chicago.

Some interesting data is contained in a newly released report from the City of Chicago which underscores what many have known for a long time. Not only do certain gun dealers who operate in a very slimy fashion contribute to a high percentage of gun-related crimes, but neighboring states with lax guns laws also must share in the blame, too.

According to this year’s Gun Trace Report, 40% of “crime guns” are from parts of Illinois outside of Chicago, but a sizable 20% of those guns come from neighboring Indiana. For a precise definition the report defines a crime gun as a firearm recovered by the Chicago Police Department that was illegally possessed, used, or suspected to be used in furtherance of a crime. These guns, sadly, make the news on a daily basis.

The failed argument that some pro-gun advocates use is that even in Chicago, where there are strong gun laws, crimes associated with guns seems out of control. So goes their claim that gun laws do not work. What those people miss, however, and what this latest report proves, is that the number of soulless gun dealers who work to evade sales laws combined with neighboring states with weak gun laws allows for the funneling of guns into places with strong gun laws!

According to this report in Chicago, almost 25% of crime guns came from just 10 gun stores, and over 50% of their guns came from out of state. Those numbers are impossible for pro-gun forces to deny. 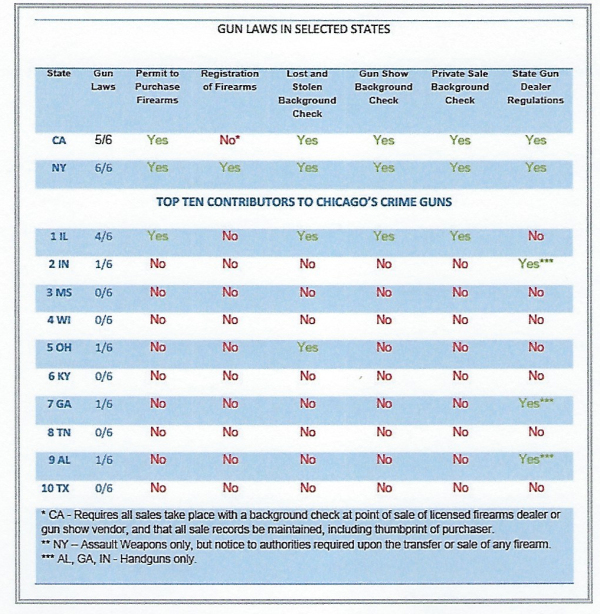 Those who have squeezed the numbers and poured over the data are seeing that in the states with the strongest gun laws, the percentage of crime guns that were originally sold in-state is at least 20 percentage points lower than in states with the weakest gun laws. Therefore it is easy to determine that Wisconsin, with lax gun laws, is part of the problem in making the streets of Chicago much more dangerous. 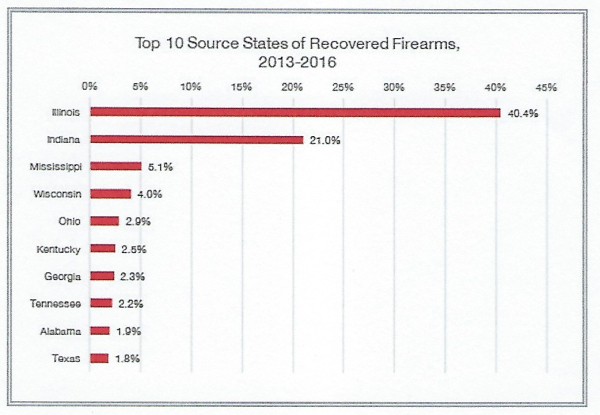 The numbers for Wisconsin are not good, regardless of how one tries to position them. In fact, they prove what two of the problems are with too many guns in circulation, and the ease with which they can be purchased. In 2016, Wisconsin was the source state for 3,772 guns used in crimes in our country. Of those, 2,944 guns were recovered in Wisconsin. Wisconsin’s weak gun laws enable gun traffickers, and other criminals and dangerous individuals to purchase, possess, and use guns in crimes in cities, towns, and neighborhoods outside Wisconsin.

We all know instances when shootings in predominately black neighborhoods in Chicago makes the national news. We also are aware of the types of remarks made from a certain demographic in this nation to such reports. Some of it is bigoted and totally wrong. But how many times do those same people recognize the role our state plays in making the streets of cities like Chicago unsafe?

With this report there is at least reason to hope that more people will be educated as to the way weak gun laws impact places far beyond one’s political borders.