Are there solutions? Panel of experts share views on epidemic of overdoses, deaths. 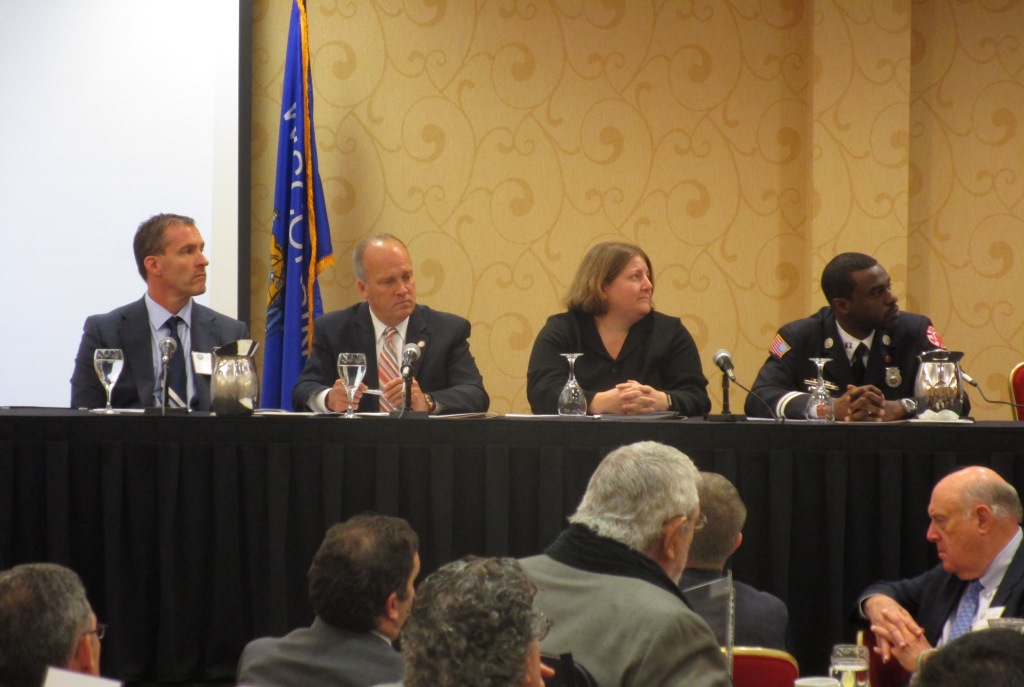 Across Wisconsin, an estimated 163,000 persons are currently abusing some form of an opioid drug.

This was one in a series of eye-opening statistics that shed new light on the ongoing crisis surrounding fentanyl, heroin, methadone, oxycodone and other drugs in this class of addictive painkillers, and the focus of a forum Friday.

The Milwaukee Regional Research Forum, an organization that partners with eight medical and higher education institutions, hosted the forum — its eighth annual — in an effort to continue a dialogue toward meaningful solutions to an ongoing problem.

“This has everybody’s attention,” said Rob Henken, president of the Public Policy Forum, who moderated the panel discussion. “It does seem to have everybody worked up. But are we there?”

Precisely where Milwaukee and the state are in battling this crisis was a key part of the discussion. While the challenges surrounding opioid overdoses and deaths have been well documented in recent years, statistics have continued to climb in recent years despite the growing attention to the problem.

According to the Milwaukee County Medical Examiner’s office, 294 opioid-related overdose deaths occurred in the city and surrounding 18 suburbs in 2016 — more than double the 144 deaths reported in 2012.

At the forum, Timothy Westlake, an emergency medicine physician with ProHealth Care, said the state of rising overdoses today stem from “a perfect storm” that can be traced back two decades.

In the late 1990s, Westlake said, a movement in the medical community led to prescribing more pain-relieving drugs. The argument, he said, was some conditions were going untreated.

“That’s what led to the problem,” said Westlake, who was the keynote speaker and one of four panelists offering varied viewpoints on the epidemic. “Powerful opioids were being prescribed for chronic pain.”

Attached to that scenario are stigmas as dependence grows, Westlake said. “Addiction is a disease that hides and grows in the dark,” he said. “We have a cultural pill bias.”

Few would contend there isn’t a problem with opioid overdoses and addiction. But steps toward seeking solutions have not always been popular.

Wisconsin Attorney General Brad Schimel, another panelist at the forum, concedes his stance on the epidemic has been controversial in some circles. But he said he is unwavering in his approach.

The strictly law-and-order approach of the past has not proven effective, Schimel said, as evidenced by the ongoing rise in overdoses and deaths.

“We’ve suffered from the Albert Einstein definition of insanity,” Schimel said. “We’ve been doing the same thing over and over again and expecting a different result. If we’re going to beat this, it has to be a multi-faceted approach.”

Using the composition of the panel seated at Friday’s forum as an example, E. Brooke Lerner, associate professor of emergency medicine at the Medical College of Wisconsin, said true collaboration is a key to eradicating the problem.

“We need to bring together groups that might seem strange to have together,” Lerner said.

Public awareness campaigns can be effective and enter into the cultural conscience over time, Lerner said, pointing to smoking cessation messages as one potent example.

“There are some lessons there that we have to try and apply to this problem,” she said.

While awareness and other conceptual issues are one end of the spectrum, there also is the practical side of treatment.

The nasal spray naloxone, which is more commonly known for its brand name, Narcan, has been seen as one step in the complex web of solutions. A growing number of emergency medical services responders have become equipped with naloxone, which is an antidote to opioid overdoses.

Joshua Parish, a Milwaukee Fire Department captain, said it is imperative that EMS responders have the proper equipment and resources so overdose patients have a fighting chance.

“Our primary goal is to reduce the mortality rate,” Parish said, matter-of-factly.

While the panelists dug deep into the issues surrounding the problem, Westlake said there is one obvious first step each person struggling with addiction has to take — he or she has to want to seek solutions.

And while there have been plenty of headlines about opioid overdoses and deaths, and the issue has become part of the public conscience, Schimel said he believes more work is still needed to get the word out about how serious the problem truly is — in urban areas, suburbs and rural communities.

“I’ve never been comfortable calling this a war on drugs,” Schimel said. “It is a battle to win over public opinion.”