But just how fast should they take that tricky Faure quartet?

The Philomusica Quartet, will open their concert series on Monday evening with a concert marking their third season in residence at Wisconsin Lutheran College. The Philomusica (violinists Jeanyi Kim and Alexander Mandl, violist Nathan Hackett and cellist Adrien Zitoun) have sustained the same membership since their debut 10 years ago. 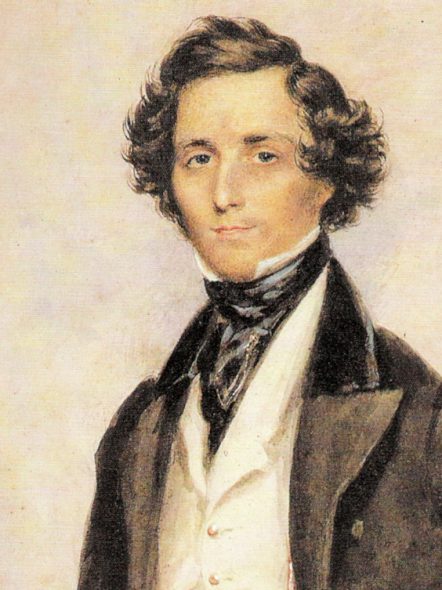 The concert would appear to be a somewhat traditional one – with a pleasant work by Joseph Haydn, a virtuosic string quartet by Felix Mendelssohn and some turn-of-the-last century French color represented by Gabriel Fauré. But things are not as they seem. The Haydn quartet has been exposed in recent years as likely written by a Benedictine Monk, Romanus Hoffstetter. The Mendelssohn carries familiar violin techniques, but the unusually turbulent music marks an outpouring of grief at the death of his sister, Fanny Mendelssohn (Hensel). The Fauré, also the writing of a man contemplating the end of his compositional career, marks a composer finally willing to take on writing a string quartet – without the piano voice that had been central to most of his chamber compositions.

The first of the concert’s works, String Quartet in F major, Opus 3, No. 5 (cataloged as Hob III:17 “Hoffstetter”), was assumed by its familiar features to be by Haydn until music scholars suggested that music publishers may have assigned it to Haydn to ensure better sales. Even Hoffstetter’s authorship is in doubt. For more than 250 years, we have been happy to hear the quartet as a cheerful Haydn piece. The second movement serenade is often played alone because of the beauty and wistful character of the melody. The extended casual lyrical beauty of this movement does seem unusual for Haydn, who often filled his compositions with unanticipated twists and turns.

Mendelssohn’s best loved works were written as a 16-year-old wunderkind. The signature style of Midsummer Night’s Dream and his String Octet can be heard in many of his other works. But Mendelssohn wrote his last composition, String Quartet No. 6 in F minor, Opus. 80, in a very different mood. His beloved sister Fanny had died. In his grief, Felix turned to the quartet Beethoven wrote as he had contemplated a life without hearing. Beethoven‘s String Quartet No. 11 in F minor, Opus 95 (“Serioso”) became the structural and emotional model for Mendelssohn’s last quartet.

Critic Kai Christiansen calls the quartet a “dark tour de force… passionate drama… high strung, anxious and ready to explode.” Mandl notes the scherzo is not the “fairy fleeting” of earlier works, but turbulent and even violent. Others suggest that this quartet might have signaled a new era in Mendelssohn’s compositional style, had he not died suddenly of a heart attack two months later at age 38.

Like Beethoven, Fauré was experiencing hearing loss and deteriorating health as he wrote his final piece, String Quartet in E minor Opus.121 He also was inspired to adapt Beethoven’s approach to quartet writing. After all, the magnitude of Beethoven’s dominance of the string quartet had kept Fauré from writing a string quartet until this point. 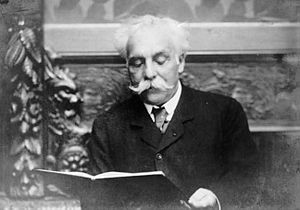 Gabriel Fauré. Photo is in the Public Domain.

Fauré wrote what was to be his final composition. The work is often serious and profound. Adrian Corleonis,  a reviewer for AllMusic.com writes somewhat cryptically about the Andante movement as “polyphonically wrought to a quietly intense, incandescent contemplation radiating an aura of light parsed, with infinite sweetness and tenderness, in ever more ethereal gradations.”

The work has been a challenge for the Philomusica Quartet. Fauré did not complete instructions for interpretation of his quartet. He left notes for others to notate the score, but this still leaves the Philomusica more flexibility than usual to decide how to  interpret the piece. Recordings of the work have varied from 22 minutes to 29 minutes in length, according to Wikipedia. Mandl says the Philomusica players went “to the earliest recordings of French ensembles that included students of Fauré. We found that the last movement was much slower that groups are doing today.” The additional challenge, Mandl reflects, is to figure out “how to layer” the sound of a complex work. “Fauré is always weaving the melodic line from one to another.” To voice it correctly, the group needs to “create a canvas that allows the listener to be able to identify the melodic line and colors that are there,” he continues. “Sometimes a player has two notes and another player continues it through.”

This attention to detail is to me a signature feature of the Philomusica Quartet.

In this concert, familiar sounds are transformed in unexpected ways. Expect layers of drama, turbulence and beauty. Does the turn to darkness portend Halloween-informed programming? No, but the changing season does increase our attraction to a serious concert experience.

Monday’s October 23 concert begins at 7:30 p.m. at Wisconsin Lutheran College’s Schwann Concert Hall, located at 8815 W. Wisconsin Ave., Milwaukee. General admission tickets ($25) may be purchased at the door or in advance through the Wisconsin Lutheran College box office web site  or at 414-443-8802. Student tickets are available for $12. Tickets for the full three concert season may be purchased at the discounted price of $67.50. A three story parking garage just east of Schwann Concert Hall offers free parking.

The Philomusica’s next concert February 5, 2018 will feature Mozart, Brahms, Dvorák, and guest Yaniv Dinur — the Assistant conductor of the Milwaukee Symphony Orchestra and an accomplished pianist.