“We Got This” youth group acquires Borchert Field lots, will add fruit trees.

By Andrea Waxman, Milwaukee Neighborhood News Service - Aug 8th, 2017 10:45 am
Get a daily rundown of the top stories on Urban Milwaukee 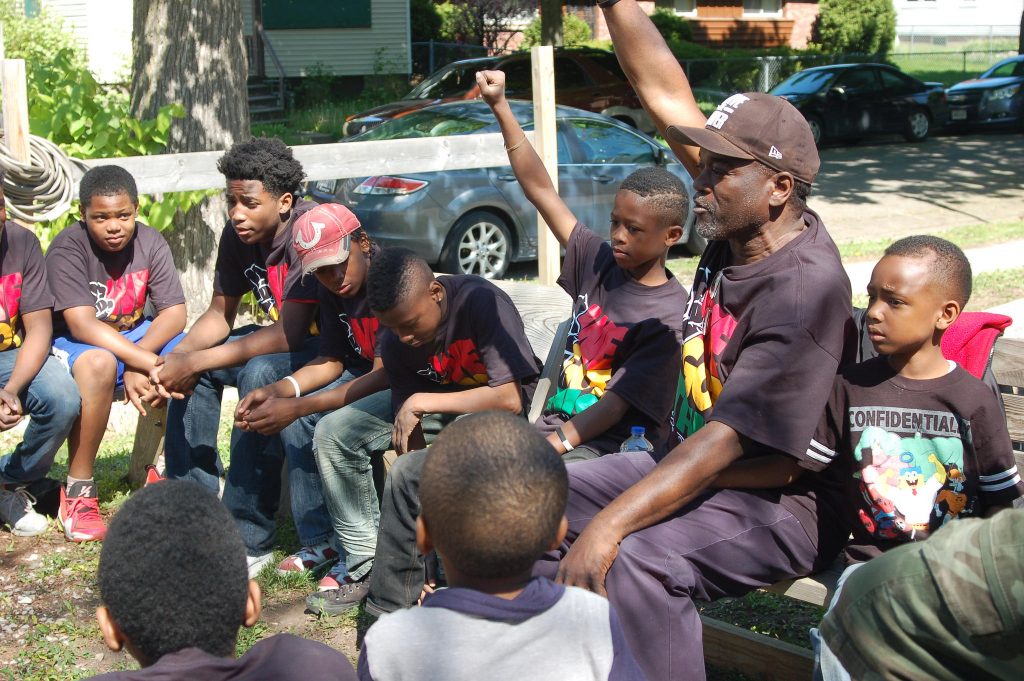 Andre Lee Ellis meets with “We Got This” participants in the garden on the first Saturday of the 2015 summer program. Photo by Andrea Waxman.

The Milwaukee Common Council last week authorized the sale of two vacant lots in the Borchert Field neighborhood to We Got This Milwaukee for $1 each. The resolution, sponsored by Alderwoman Milele Coggs, was adopted by a 15-0 vote.

Coggs said that as grassroots organizer Andre Lee Ellis described the work We Got This is doing in a community garden on one of the lots, “there literally wasn’t a dry eye” in the Zoning, Neighborhood and Development Committee.

Ellis, a resident of the block, created the community garden in the lot at 824 W. Ring St. on the northeast corner of 9th and Ring streets in 2012.

The second lot, at 3257 N. 9th St., is located across the street. There was a foreclosed house there until a few weeks ago when it was razed by the city. Ellis plans to install an orchard, several sheds to hold gardening tools and a temporary office for the organization, he said. 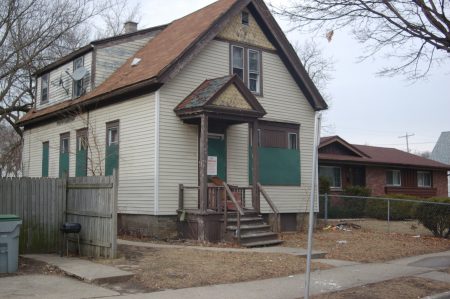 The We Got This orchard will be established on the site of this foreclosed house, which was torn down recently. Photo by Andrea Waxman.

“This is changing the narrative,” said Ellis. “It enlarges our territory and allows us to expand (our program).” There isn’t room for fruit trees in the existing garden, he said.

Ellis moved to the neighborhood in late 2011. Not long after that a young man was shot and killed on the block south of 9th and Ring, and Ellis started observing and talking with young male residents walking on his block. Noting that many did not have jobs or fathers in their homes, Ellis started befriending and advising some of them. In 2012, he got permission from the city to create the garden as a community meeting place.

One day, a neighborhood mom asked Ellis for advice about her 12-year-old son, who was getting in trouble with the police. Ellis offered to give him a job working in the garden to keep him busy and out of trouble.

The boy’s friends started coming to the garden with him and Ellis’ mentoring efforts evolved into a grassroots program that now attracts close to 100 young men each Saturday morning in summer. The boys and teens clean up the neighborhood and grow vegetables in the garden. They are paid $20 for four hours work if they arrive by 8 a.m.

Ellis has enlisted adults in the community to speak with the boys about overcoming the difficulties of poverty in the central city, serve as mentors and role models, and donate money to pay the young men. He has also established a PayPal account for online contributions.

During the four summers that We Got This has operated, the number of boys and adult mentors has increased, even as some participants have left for other employment opportunities.

We Got This also brings the boys and mentors together in December for a formal dinner.

Sen. Lena Taylor, who has supported Ellis’ efforts since the beginning, said, “I’m extremely excited about Andre and the work he does,” which, she pointed out, increases public safety. Calls to the police from the immediate area have dropped dramatically, she said.

In addition, the program is helping some of the young men develop an interest in forestry or agricultural careers and entrepreneurship, as well as connecting them to scholarship opportunities, teaching job readiness and encouraging them to make healthy choices.

“Young men who don’t believe they are going to live aren’t interested in going to school,” said Taylor.

Coggs, who has worked with Ellis on many aspects of his program, said, “I am extremely appreciative of the work that Andre and the team of people with We Got This do … on 9thand Ring, and the difference they make in the lives of the young people they come into contact with.”

She added that she hopes that others see this work “as an inspiration and a (demonstration) of how much influence they each can have on their own block and their own community.”