The Milwaukee Common Council still isn’t happy with police chief Edward A. Flynn. They’re maintaining a hold on $1.1 million in federal asset forfeiture funds in attempt to get more communication from the chief, something a number of council members noting they’re getting less and less of.

Alderman Russell W. Stamper, II has led the push force action from the chief. Stamper moved today to hold the measure again, noting that he had failed to receive communication from the chief or any members of the Milwaukee Police Department since it was last held on July 11th. That meeting included a 45-minute floor debate on the matter with numerous council members expressing their frustration with the communication, or lack there of, coming from Flynn.

Before the Flynn bashing could start council members Terry Witkowski and Stamper traded barbs over whether Stamper had been contacted. Later in the meeting an email provided to Urban Milwaukee suggests that Stamper was approached by a MPD staff member to setup a meeting with Flynn, but Stamper later disputed this (more on later this under “Has Stamper Heard from Flynn and His Staff?”).

Whether Stamper was contacted appeared to remain unresolved on the council floor, but that didn’t stop a number of council members from expressing their frustration with Flynn.

Ald. Nik Kovac stated “I do think this fits a pattern in our police department, recently, it didn’t always used to be this way.” The East Side and Riverwest representative went on to note “the police department needs to work with the Common Council. We need to send that message.”

Ald. Tony Zielinski is taking things even further. Zielinski noted “This is one of the most recent examples of the police chief not even giving us the most minimal response, which is why in the September cycle I will introduce legislation to ask the state to give us the authority to remove the chief with a two-thirds majority.”

Ald. Robert Donovan noted “as a member of the Milwaukee Common Council I don’t consider my job just to be a rubber stamp.” The alderman, a champion of the rank-and-file police department members, went on to note “why he wouldn’t reach out after that lengthy debate three weeks ago is beyond me” before boldly proclaiming “damn right hold it again.”

Ald. Robert Bauman noted “I’ve never had communication with the chief. I gave up long ago because you’re never going to have a conversation with him.” He noted that while on a work trip to Detroit last week he communicated with the commissioners of the Department of Public Works and Department of Neighborhood Services up to 18 times, even late at night, but struggles to get a response from the chief.

Bauman went on to clarify what is certainly on the minds of anyone observing the council’s push, asset forfeiture is a side issue. He noted that the real issue isn’t the funds or the chief’s spending plan, but the lack of communication from the department and the council’s inability to “have a seat at the table” regarding public safety despite shouldering much of the blame.

A letter from City Attorney Grant Langley was submitted to the council by Witkowski. The letter confirms much of what was discussed at the July 11th debate on the matter, notably that the funds cannot replace any existing police expenditures and can only be spent on law enforcement purposes. The letter also confirms the city already possess the funds in a trust, and the council action would just authorize a transfer.

No one is convinced the police department will cease to function without the $1.1 million in question. The department has a budget just over $302 million for 2017. Ald. Michael Murphy, who doesn’t support the hold on the funding, put this in perspective during the July 11th debate, saying the $1.1 million is “a lot of money, but it’s not a lot of money. The police department budget last year was I think was over $300 million.”

The matter, which has been working its way through the council since March 28th, will now almost certainly linger into September given the council’s August recess.

Has Stamper Heard from Flynn and His Staff? 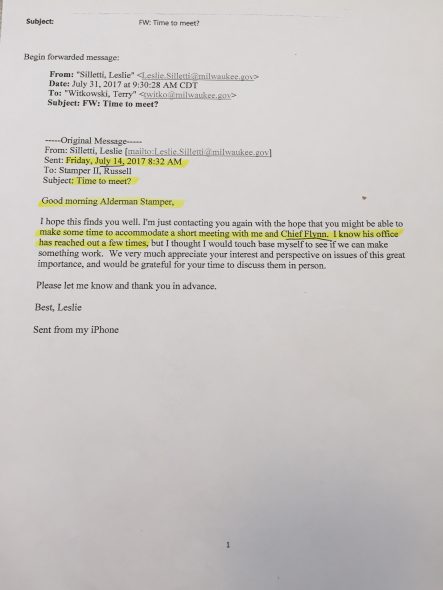 At issue in the meeting was whether Stamper has been approached by Flynn or a member of his staff for a meeting. Responding to a question by Donovan, Stamper noted he hasn’t been approached by the chief. Witkowski then took the chance to reword that question, asking if anyone had contacted Stamper regarding the matter. Stamper initially refused to answer citing that Witkowski had to identify who told him to ask. Stamper eventually answered that he had not been approached.

A printed email provided to Urban Milwaukee later in the meeting by Witkowski confirms that Stamper was emailed by MPD Director of Planning Leslie Silletti to setup a meeting with Stamper, Flynn and herself. The email, dated July 14th, notes “I know his office has reached out a few times.”

Stamper told Urban Milwaukee that he was unable to meet with MPD at the dates provided. Later in the meeting Stamper said MPD cancelled a meeting on him regarding the matter.

Stamper told the council “I am not running from this, I am not hiding.” He noted he intends to meet with MPD in the coming days and called Witkowski’s actions “bogus” and asked “what kind of alderman is this?”

Stamper went on to criticize Witkowski for not coming out in support of the chief releasing the Department of Justice draft report on the Milwaukee Police Department.

Borkowski moved to reconsider the matter to allow the council to debate it again once the email was distributed. Only council members Bohl, Murphy, Witkowski and Hamilton voted to re-open the debate, which didn’t meet the threshold required to reconsider the item.

In a speech regarding the motion, Ald. Coggs stated “we’re sitting here arguing about an email while people are dying in the streets.”

Later in the meeting the Common Council took up a file regarding the use of state, not federal, asset forfeiture funds. The state currently evenly splits the proceeds between law enforcement and the state education fund. A bill with bipartisan support at the state level would redirect the funds, minus administrative costs, entirely to schools.

Ald. Kovac is sponsoring the legislation and noted “this is rare case where the editors of the National Review and Mother Jones agree.” He noted that “it creates a moral hazard where the police seizing assets can spend it on the police.”

Kovac noted that the Milwaukee Police Department is opposing the measure.