1886 West Side home of world's most acclaimed woman farmer now a classic B&B. 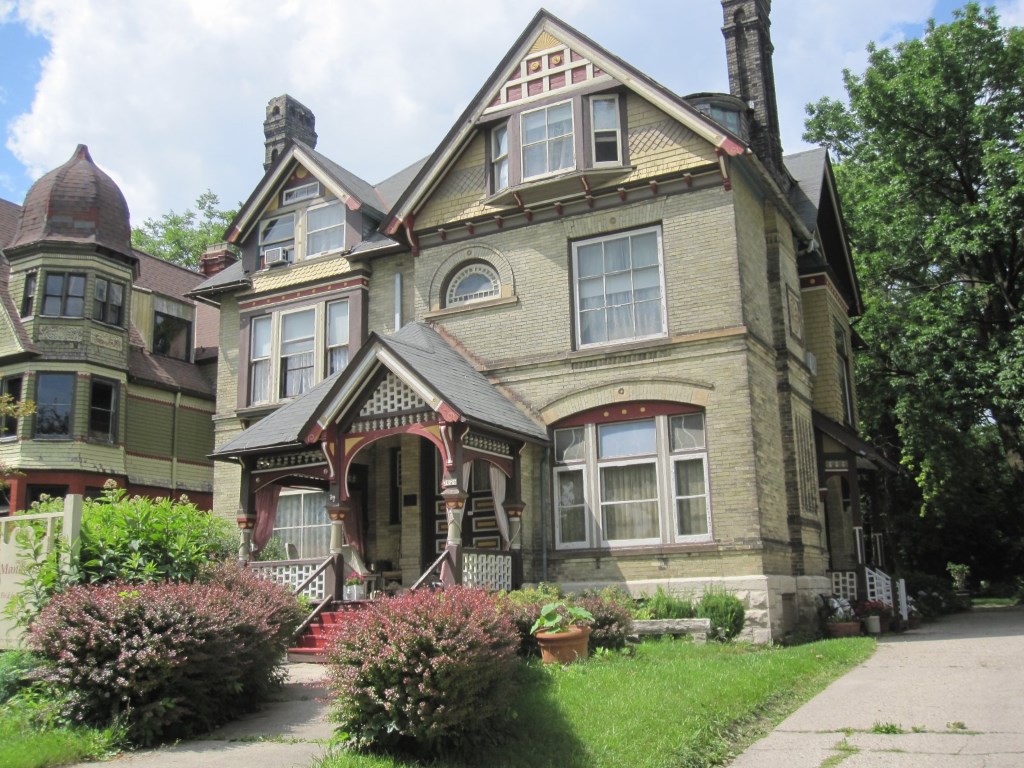 This West Side home was built 131 years ago, back in 1886, on a broad 190-foot-by-100-foot lot for David W. Howie (1841-1911) and his younger wife, Adda Howie (1852-1936). David was an agent for the Northwest Fuel Company, and he could get to work simply by walking outside his house, and stepping carefully across the street to await an eastbound West Side Railway Company Wells Street Horse Car.

His wife, Adda Johnston Howie, pursued the usual Upper Victorian arts of housekeeping and social activity. She had a gift for writing, especially poetry, and composed a children’s book called Modern Fairy Lore, which was published in 1890, the year electric streetcars replaced the horses that took her husband to work.

This is no cookie-cutter home, unless the cookie happened to be composed of gingerbread, for the place was loaded with it in the form of custom mantlepieces, stained glass, woodwork and a spectacular staircase. According to the Wisconsin Architecture and History Inventory, “In the context of Queen Anne houses in Milwaukee, the Howie House compares favorably with the city’s finest examples.” That’s saying something.

The Howies spent just a decade in the home, with David continuing his coal trade. Among his customers was the City of Milwaukee. Howie’s firm sold 2,239 tons of coal to the city’s Menomonee Sewage Plant in 1896. It powered 29,566,940 revolutions of that engine, which pumped 18,479,337,500 gallons of raw sewage into the Menomonee River.

In 1897 the family moved west, to “Sunny Peak,” a farm in Elm Grove that Adda Howie inherited from her parents, and where she grew up. There is no doubt this was Adda’s move.

She was on her way to becoming a farmer. By the time of her death in Milwaukee in 1936, Adda Howie was one of the most famous women in the world. Her fame was to come not from her poetry nor her children’s book, but from the efforts she undertook that revolutionized farming and made Wisconsin America’s Dairyland.

“My farm was an inheritance,” she wrote years later, when it was among the most famous farms in the world, and she was the most famous woman farmer. It consisted of 120 acres in the Town of Brookfield, and had been run by tenants for two decades “or more,” she wrote.

It was in a “rundown condition,” she lamented.

Not for long. Howie was determined to whip the old place into shape. She was familiar with the work of the University of Wisconsin to help Wisconsin farmers transition from a dependence on wheat to more sustainable agriculture based on modern principles of crop rotation, sanitation and other standards. It was a tough fight for the determined woman.

According to her reminiscence: “My early efforts were made at a time when scientific farming was held in contempt.”

This was an era where despite evidence to the contrary, reactionary elements denied scientific fact and persisted in pursuing policies that were contrary to their self-interest and that of the public. Can you imagine?

She was “ridiculed” for having lace curtains in her barn. (They kept the flies out.)

“I think mine was the first sanitary barn in Wisconsin. … My barn was whitewashed, the floors scrubbed, windows washed and curtained, cattle brushed and petted, and everything done to make the barn as sanitary and attractive as possible.”

Adda insisted that music be played while the cows were milked. And the milkers had to wash their hands before doing their duty! This was 30 years before sanitary milking practices became the law.

Adda wanted to make hers a model farm that others could emulate. Despite her considerable means, she determined to improve the farm using only the profits it generated, even in its inchoate state. This was not the farm of a rich man, like Captain Pabst in Oconomowoc. In time she went from the two cows she inherited to a herd of 100 purebred Jerseys, the largest in the state and some of which were sent to research institutions and even to Japan to boost the herd there.

She was mocked for her “Kindness Farm,” with its feminine ideals and practices. But the proof was in the milk bucket. Her cows regularly set records. In 1902 when a typical dairy cow might produce three pounds of butter a week, Adda’s cows were churning out five times that amount. She was the first woman to become a member of the state agricultural board, and traveled to France in 1906 to talk about poultry. King Edward VII gave her a permit to visit his dairy barns. Her portrait has hung at the University of Wisconsin Agricultural Hall since 1924, the first woman so honored.

The Home in Decline

While her Elm Grove farm improved, the old home in Milwaukee declined. The West Side was no longer a great draw for the wealthy and many of the homes were turned into rooming houses, for good or ill — usually the latter. This residence was somewhat fortunate in that it was run for decades as a rooming house for women only, which presumably decreased the wear and tear. The home to the west, also large, was incorporated into the property and a single fence surrounds both today. By 1975 both properties were available for $59,500 and were bought by Bryan Wangard and Robert Wangard. There was “extensive deferred maintenance,” the inspector noted. Steven C. Wangard was found guilty of seven counts related to the management of the home and the one next door. They were closed in 1991.

The property faced rough times. The woodwork was stripped out, even the staircase. The tiles in the fireplace were gone.

The assessor took a grim view of it in 1994, three years after the property had been shut down as a drug house. “Totally uninhabitable. Major, major work needs to be done + most likely will never materialize,” he lamented.

New Owners to the Rescue

In 1999 the home and its mate were purchased by the current owners, Andrew M. Parker and his wife Marie C. Parker, who now operate the home as the Manderley Bed and Breakfast, one of a number of such establishments in the vicinity that have added life to the old neighborhood.

“Manderley,” of course, is the name of the fictional estate of the character Maxim de Winter in Daphne du Maurier’s 1938 novel, Rebecca, which later became a famous Hitchcock film starring Laurence Olivier.

The complicated, double-wide facade of the real-live Milwaukee home retains its original features, and here and there even possibly some of the original paint. (It’s not easy keeping these old monsters in good shape.) The owners managed to find the original staircase, and thus were obliged to pay for something that had been stolen from their home.

The iron fence in front of the home and its neighbor is a massive affair. To the north is a driveway and a parking lot. The home is largely landscaped, and it features an abundance of perennials and shrubbery, some of which could use a pruning. A large Silver Maple (Acer Saccharinum) may date to the Howie era, and the deep lot affords considerable privacy. The four rooms for rent range from $129 to $169 per night and include a candlelit breakfast and other amenities, including full beverage service. 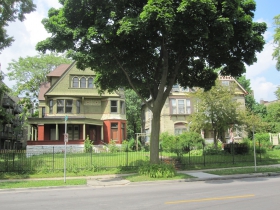 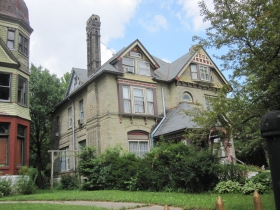 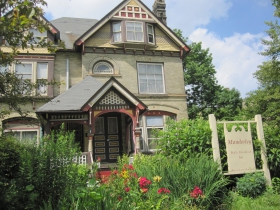 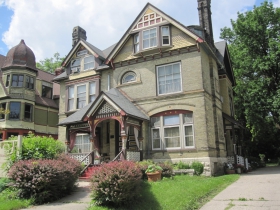 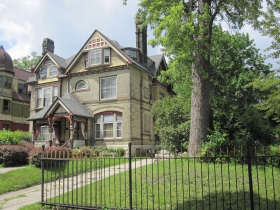 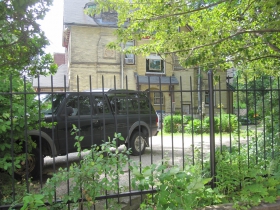 For those seeking further information on the home’s fascinating history, here is the Wisconsin Architecture and History Inventory report and the Adda Howie Reminiscences from the Wisconsin History collection.