By Gretchen Schuldt, Wisconsin Justice Initiative - Jul 5th, 2017 11:52 am
Get a daily rundown of the top stories on Urban Milwaukee

The state’s Lincoln Hills and Copper Lake juvenile prisons must reduce the maximum amount of  time incarcerated youths are held in solitary confinement, a federal judge told lawyers involved in a lawsuit over abusive conditions at the institutions. Other guidelines call for a reduction in the use of pepper spray, increase in the opportunity for physical exercise and an end to rule that only one book is allowed to inmate in solitary confinement.

State defendants in the case, including Secretary of Corrections Jon Litscher, have admitted the schools held youth in solitary for more than 50 consecutive days. The new guideline calls for a maximum of five to seven days confinement.

In addition, U.S. District Judge James D. Peterson wrote in a guiding order, “restrictive housing should not be routinely used for prehearing confinement.”

Peterson issued his order to assist attorneys working on a the terms of preliminary injunction to eliminate the worst conditions at the institutions.

Peterson listed a total of 11 points the defendants and plaintiffs in the case should consider as they try to agree on terms of the injunction. A proposal is due from the two sides on Friday. The plaintiffs, current and former inmates of the schools, are represented by the American Civil Liberties Union of Wisconsin and the Juvenile Law Center, with pro-bono assistance from Quarles & Brady. 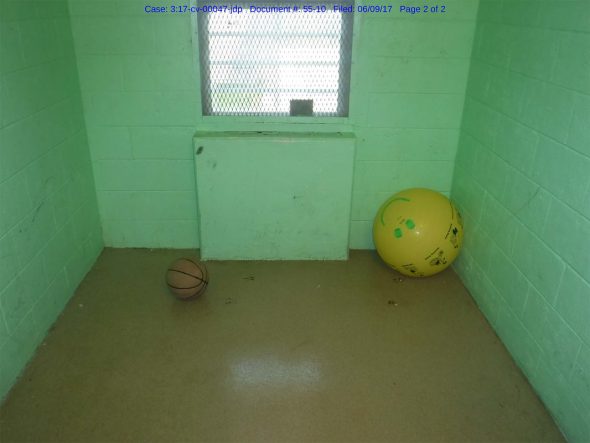 Here is a cell used as a recreation room in the security unit at Lincoln Hills.