Accordions at the Crossroads

Why we’ll have a great Mexican polka band at the Polish Moon Ride, July 21.

By Dave Schlabowske, Bike Federation of Wisconsin - Jul 4th, 2017 03:33 pm
Get a daily rundown of the top stories on Urban Milwaukee

How did we get so lucky that we can find great Mexican-style Polka (Musica Norteña or Conjunto) in the historically Polish neighborhood where we hold our Polish Moon Ride? Is it something in the water there that you can’t live under the Polish Moon without Polka?

Actually, we owe it to the eastern European immigrants who moved to northern Mexico in the late 1800s. They may have been desperately seeking out a better life in the new world, but they brought their accordions with them. Listen to this great history NPR put together to learn more.

It was with this cultural co-mingling in mind that we sought out a Milwaukee Norteña band for our ride. We couldn’t find a local Norteña band with a simple Google search or by even by asking our neighborhood association, so I went on a search. Each weekend I rode my bike around Milwaukee’s near south side neighborhoods looking for Latino church festivals with a Norteã band.

At first all I could find were Mariachi bands, which are great, but don’t have that accordion or Polka sound. I finally ran across MX Rudigo Norteño at a small festival at St Hyacinths Roman Catholic Church at 15th and Becher St. The band was awesome and the rest of the crowd seemed to like them as much as I did.

So I waited until after their set and approached them with my helmet in my hand asked apologetically in my terrible Spanish if they would play our ride. Between their heavy northern accents and my infantile Spanish, the best I could do was tell them a date, and ask for a card so I could have one of our fluent Spanish speaking staff contact them later. Turns out that was enough, because I am happy to say MX Rudigo Norteño will be kicking off our Polish Moon pre-ride feed outside Wayward Kitchen. 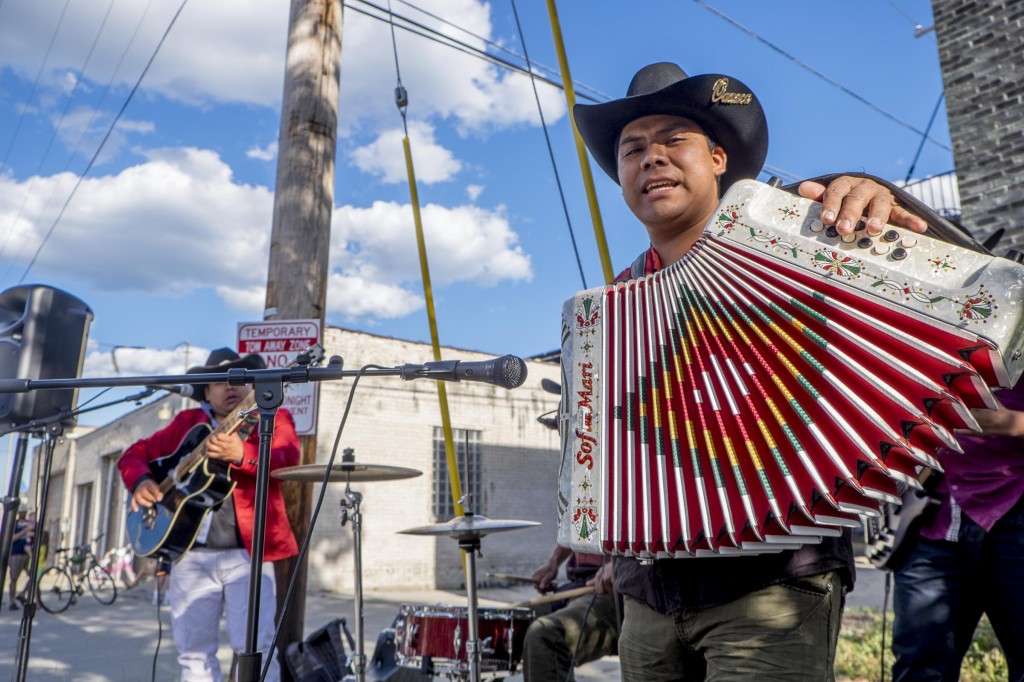 So far we can’t convince this guy to play from the back of a cargo bike, but he will be ripping it up while you get your fill of delicious Polish and Mexican food before the ride.

So we have found a great Mexican Norteña band, but their accordion player wants nothing to do with riding on the back of a cargo bike and playing. Honestly, our Polka-style accordion players don’t find it the most comfortable ride either. We are considering hiring pedicabs instead, but it won’t be quite the same as having them sitting on the back of a bike, facing all the riders. It would be easier on their backs though. 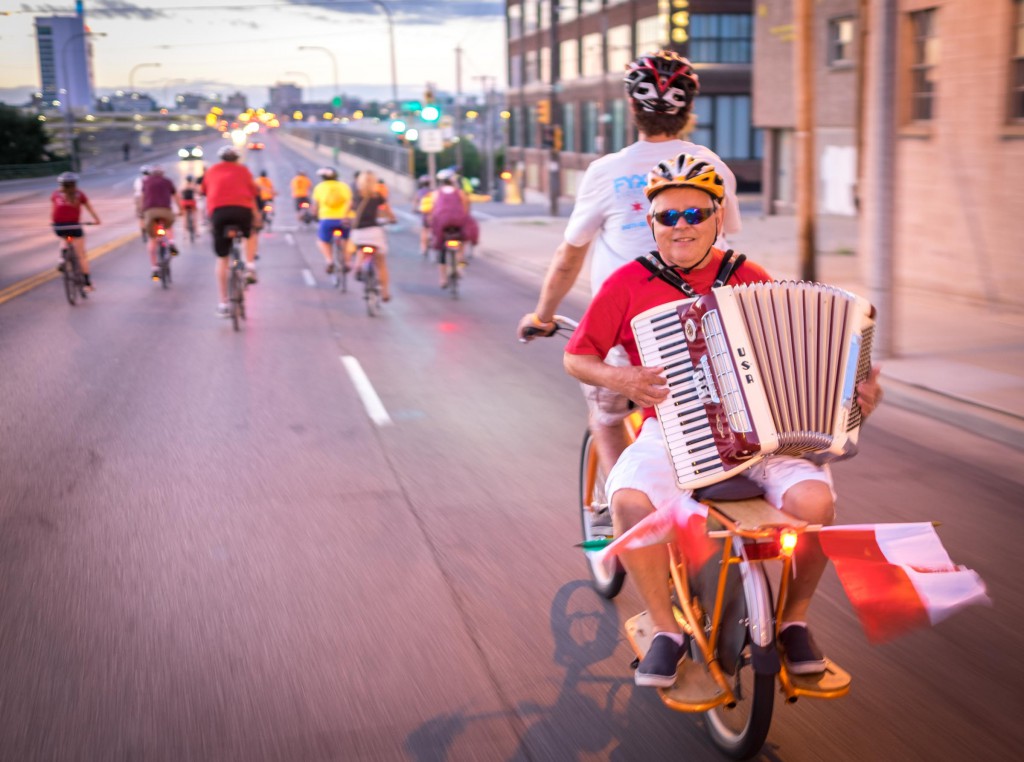 Thanks to Uncle Kenny for riding with us again this year! 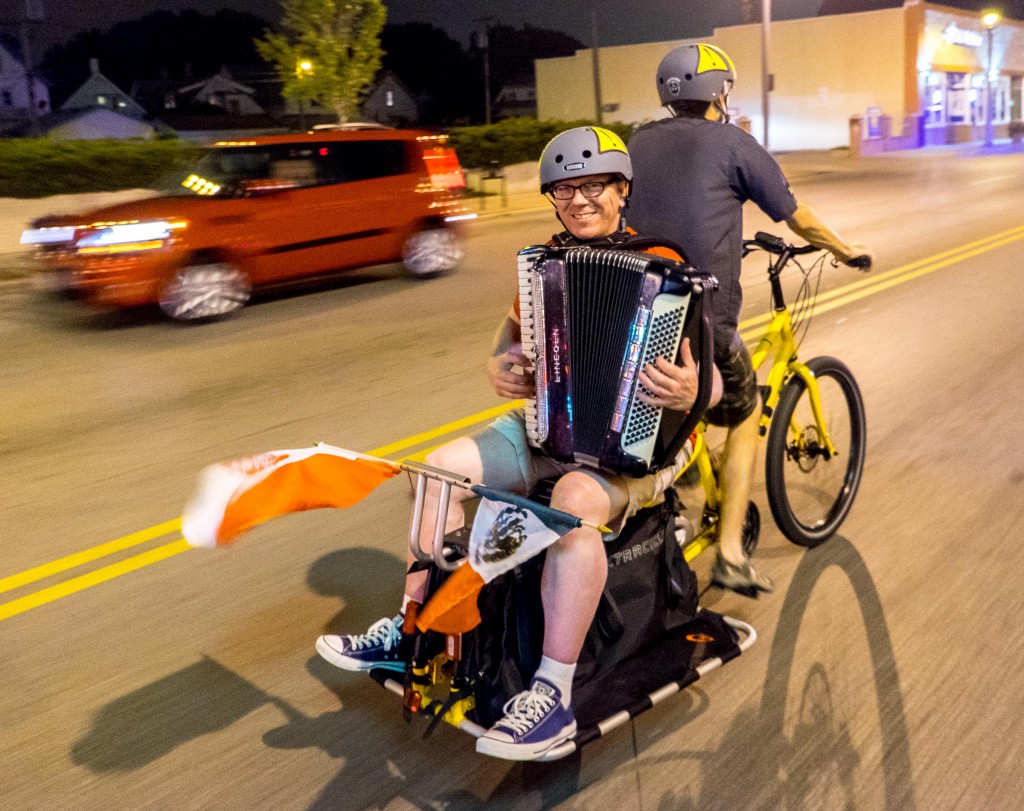 Special thanks to Don Turner for riding with us again AND finding two more accordion players who are also willing to play from the back of bicycles!

Registration for this year’s Polish Moon Ride is open, so join us at 5 p.m. on Friday, July 21st, for the fourth annual Polish Moon Ride, a unique, family-friendly bike tour through Milwaukee’s historic Polish neighborhoods. The easy, slow roll through the real “Streets of Old Milwaukee” honors the area’s Polish and German history while it celebrates the present-day Latino culture. Be sure to bring the whole family for this ride. The pace and distance are slow enough for all ages and abilities, and the police keep everyone safe. Kids of all ages love the feeling of riding around on these historic streets of old Milwaukee as the sun sets!
More information here: