“It’s quiet… too quiet.” We’ve all heard that line in one movie or another. The halls of the State Capitol can have a ghostly quality when it’s quiet. This makes the sounds of lobbyists’ footsteps all the more noticeable as they make their way from one back room to another – especially the distinctive patter from pricey loafers often chosen by special interest lobbyists.

With the Legislature’s budget committee taking time off from public meetings, these lobbyists are working on deals as the process winds down. An alarming and costly deal that was slipped into an earlier budget took full effect last year.

The so-called manufacturing tax credit was touted as a tool to create jobs but actually pays out when jobs are cut. Nothing in the credit required job creation. Worse, investors can still qualify for the credit even when jobs are eliminated.

The results? Wisconsin LOST nearly four thousand manufacturing jobs in 2016 (chart below). Adding injury to injury, the GOP is forcing workers to pay off the insiders who eliminated the jobs with 300 million hard-earned tax dollars every year. 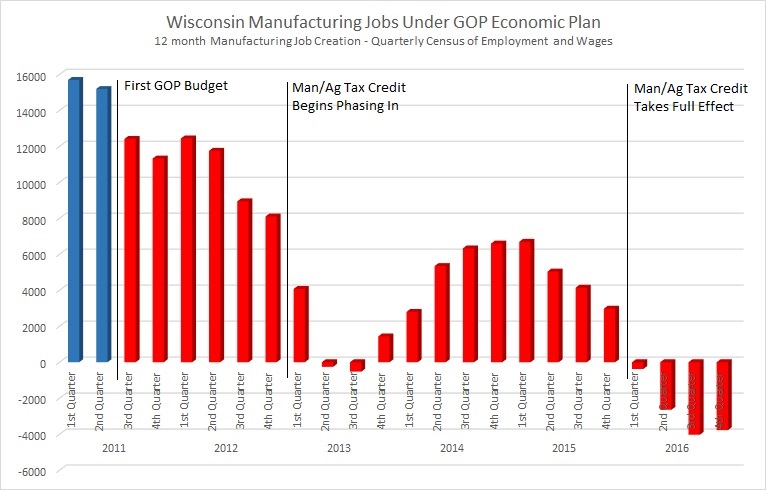 At the national level, last year marked a sea change for Republican politicians. After years of cuts to workers and handouts to job-cutters, Republican voters chose a candidate who pledged to put work and workers first.

Unfortunately here in Wisconsin it’s more of the same.

Career Republicans on the budget-writing Joint Finance Committee voted to punish workers who lose their jobs by cutting their access to Homestead property tax credits. After the GOP raised taxes on workers who’ve lost jobs, they rejected cutting tuition for technical colleges so they could keep handing $300 million of your hard-earned tax dollars a year to wealthy insiders who eliminated manufacturing jobs.

In 2016 the GOP took $300 million from those workers’ pockets and gave it to insiders who cut nearly 4,000 manufacturing jobs. Wages in Wisconsin that were already too low fell in 2016. The Wisconsin GOP economic plan trailed the national recovery for another year and suffered its worst overall private sector job performance since the depths of the Great Recession.

And the Wisconsin version of the GOP hauled out an old line about people who work for living needing to pull themselves up by the bootstraps. Only people who spend their time in back rooms with loafers think that’s what bootstraps are for. And only special interests getting the handouts think this is a job creation plan.

It’s not working. Not because they’re out to get us, but because the special interests simply don’t care what their plans do for – or to — anyone on the outside. As the Wisconsin GOP continues to defy the national tide, the people doing better are the less than ½ of 1 percent of taxpayers who got a handout for eliminating jobs.

It’s time to stop putting lobbyists in loafers ahead of working taxpayers who know what bootstraps are actually for. It’s time to put Wisconsinites who do the work and pay the bills first.

State Sen. Janet Bewley, D-Ashland, is a member of the Wisconsin state Senate.