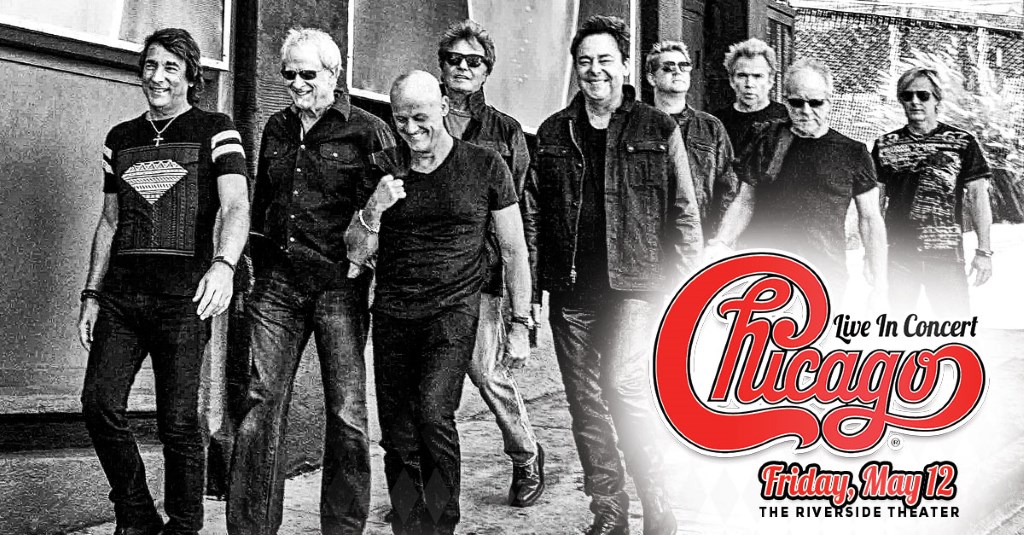 For musicians, unless their brains or body gives out, they never have to stop making music.

The band Chicago, which brings its show to the Riverside this Friday, is still going strong after 50 years. The group is comprised of serious musicians, guys that can read music as opposed to gyrating on stage and looking good in Spandex. From the beginning, members of Chicago were committed to the music. As far as they were concerned, whatever else happened was gravy.

Core members of the band have been pals since college days at DePaul University in Chicago. The friendships are well established and the musical connections go back five decades. The original band membership consisted of saxophonist Walter Parazaider, guitarist Terry Kath, drummer Danny Seraphine, trombonist James Pankow, trumpet player Lee Loughnane, and keyboardist and singer Robert Lamm. They soon added tenor and bassist Peter Cetera. Tragically, in 1978, Kath killed himself with a gun he thought was unloaded.

The band was originally named Chicago Transit Authority in 1967, because band members had to ride to college on city buses. But shortly after the release of its debut album in April 1969, the band received a cease-and-desist order from the actual Chicago Transit Authority. Consequently, from late 1969 onward, the group became known simply as Chicago. They were so tightly knit they said the only way somebody would leave the band is either ‘voluntarily or in a box.’

The self-described “rock and roll band with horns” began as a politically charged, sometimes experimental collection of musicians. The band’s horn section has been described as “one set of lungs.”

In the beginning, their music wasn’t exactly mainstream and audiences didn’t quite know what to make of them. But that quickly changed. In the 70s, you couldn’t switch on the radio without hearing Chicago’s music. The song “25 or 6 to 4” was at the height of its popularity. “Colour My World” became the theme of proms across the country.

A recent documentary was released on CNN that follows the history of the band from its inception. It’s comprehensive and entertaining. It speaks to copious drug usage, groupies, death and the realities of being on the road up to 300 days a year, and what that does to you as a person and an artist.

Their first album in 1969 was laden with hits like “Does Anybody Really Know What Time it Is?” “Beginnings,” and “Questions 67 and 68” — rocketed them to stardom.

They were soon working venues with Janis Joplin and Jimi Hendrix. Hendrix, often called the best guitarist in rock history, said guitarist Kath played better than he did. Kath has been described as a “forgotten guitar god” who was “criminally underrated.”

By 1985, Cetera left to embark on a successful solo career, and was replaced by Jason Scheff. Reborn yet again, Chicago managed to achieve gold sales with Chicago 18 and platinum with 19. While the wound of Cetera’s departure doesn’t seem to have completely healed, the band has persisted.

How does a band last fifty years and stay viable? Founding member Walter Parazaider sums up the band’s appeal, and ultimately its greatest strength: “There were so many diverse personalities in this group that sometimes I had to wonder why this didn’t blow up after about a year’s worth of success. But we loved music so much.”

Just last year, Chicago was inducted into the Rock and Roll Hall of Fame. The honor seems like a no-brainer, but it took far too long for them to be recognized. Cetera was a no-show, perhaps solidifying fans resentment of the singer. Founder Robert Lamm says the band would have welcomed him with open arms. “If Peter didn’t want to play or couldn’t play or couldn’t sing or whatever, at least he could have stood with us. I think he certainly deserves it. I think it’s unfortunate.” Original drummer, Danny Seraphine had been fired by the band in 1990, but played with them at the induction ceremony.