The quartet's 2014 Frankly Music appearance was impressive. Expect nothing less. 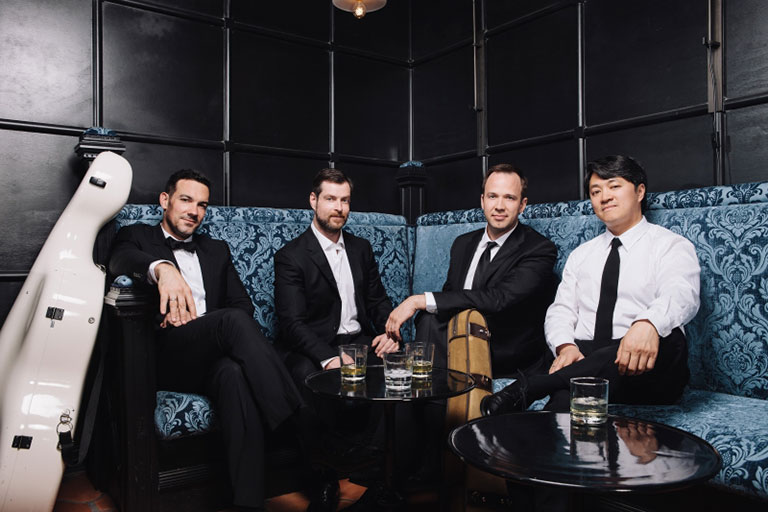 Frankly Music succeeds as a series because local world-class violinist Frank Almond selects friends from Milwaukee and beyond to perform great chamber music with him. That they consistently offer a great concert experience with little rehearsal, attests to Almond’s choice of friends. This Monday, the series will return to the traditional model for great chamber music: a long-established ensemble whose experience with each other informs the music and refines the art. Almond has invited the Miró Quartet, in residence at the University of Texas at Austin, to take the stage next Monday evening. This is an encore performance. The Miró Quartet was well received in an appearance in the Frankly Music series in 2014.

Founded in 1995, the Miró Quartet (violinists Daniel Ching and William Fedkenheuer, violist John Largess and cellist Joshua Gindele) was awarded first prize at several national and international competitions including the Baniff International String Quartet Competition and the Naumberg Chamber Music Competition. The Quartet likes to take on challenges – performing Beethoven‘s three great Opus 59 quartets in one sold-out evening at Carnegie Hall and the entire set of Beethoven Quartets in a nine day cycle for Chamber Music Tulsa this season. Grammaphone’s summary of their efforts seems apt: “The Miró’s approach to these epoch-making masterpiece is consistently animated and imaginative, often keenly driven though nearly always dispatched with a light touch.”

Haydn’s Opus 20 quartets mark the emergence of the model for string quartets. Haydn balanced the role of each player; establishing the quartet as a conversation among equals. His String Quartet in D Major, Op. 20, No. 4, “The Sun” leaves behind a Roccoco galant style favored by the Viennese court in favor of a more passionate Sturm und Drang (storm and stress) emotional range. The quartet opens with a dramatic sunrise, includes a minuet “in gypsy stye” and a “presto” finale also reflecting a peasant festival. Critic Lucy Miller finds the closing “a hair-raising challenge for any player.”

Brahm’s was never one to listen to the aphorism, “the perfect is the enemy of the good.” He threw away many more compositions than he shared with history. His String Quartet in C Minor, Op. 51, No. 1 stands as the first of three perfect quartets. It has been claimed he destroyed 20 quartets before releasing the two Op. 51 quartets.

I appreciate critic Kai Christiansen‘s description of this complex, well-structured work on his Earsense blog :

“The C minor quartet comprises two outer movements of dramatic verve (possibly angst) with two gentle, more lyrical movements within. The first movement is a dazzling sonata form bristling with forceful agitation, rhythmic complexity and sharp part writing. The mood softens, even melts into the lyrical second movement Romanze… An intermezzo in a more relaxed pace” replaces a scherzo. “The finale restores the quartet’s initial nervous drive, starting with the recurring motto theme with a fresh, strident urgency. A sonata-rondo hybrid alternates the dark surge with more hopeful contrasts, the omnipresent motive woven throughout in several guises. An ultimate coda accelerates the pace into a frantic rush towards a resolutely tragic conclusion.”

Bartók’s String Quartet No. 4, Sz. 91 is widely acknowledged as his best. The five movement quartet takes a perfectly symmetrical arch form, pairing the first and fifth, second and fourth movements. A simple motif of three rising and three falling notes serve as a cell that inform extensive development of the first movement. The central third movement contains a moment of “night music” – bird songs and other forest sounds informed by a traditional Hungarian melodic style. A dramatic fourth movement is entirely pizzicato – featuring strings pulled back so hard that they snap against the fingerboard. The final movement returns to aggressive dynamics that gradually unravels the complex variations to return to the simple motif which began the quartet.

This ambitious concert program seems designed to impress. If their 2014 appearance is an indication, that is exactly what to expect.

Monday’s April 10 concert will be held at 7:00 p.m. at St. Paul’s Episcopal Church, 914 E. Knapp St. in downtown Milwaukee. Tickets may be purchased on-line or at the door – $30, general seating and $10 student. Come early for the best seats and stay late for the creative Frankly Music reception after the concert.

The Frankly Music series returns to the usual formula in the last concert of the season on May 15. Cellist Robert DeMaine and pianist Adam Neiman will join Frank Almond for music from Czechoslovakia – featuring Martinū, Janácek and Dvorák. That concert will be held at Wisconsin Lutheran College.