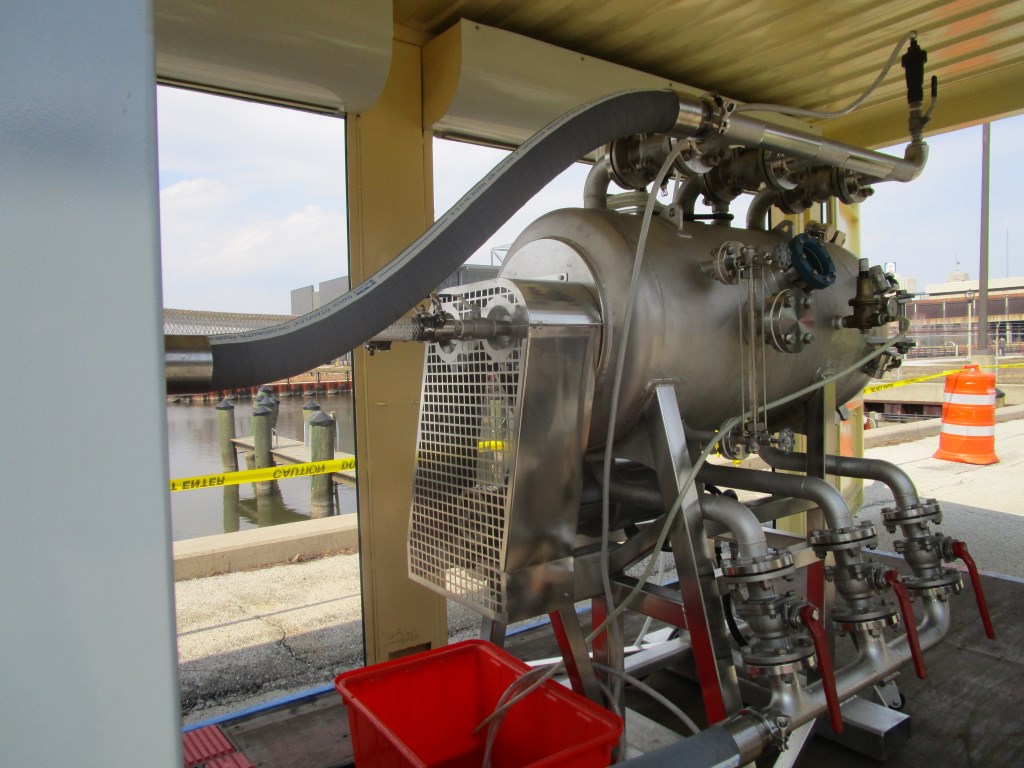 CORNCOB Inc.’s mobile unit, Alfie, has been used to showcase how the company aims to filter municipal and industrial water. Photo by Dave Fidlin.

What’s it all about, Alfie?

For months, a new machine dubbed Alfie has been touring different locales across the U.S., sharing the latest in water filtration technology.

Last week, in a move that coincidentally tied in with Milwaukee Water Week, Alfie made a triumphant return to home base in Milwaukee — a locale that is increasingly being touted as a wellspring for the water technology industry.

Waukesha-based global manufacturing company CORNCOB, Inc., which specializes in water technology, developed the machine — which endearingly received the Alfie name early in the development process — with an eye toward providing cutting-edge products to the water and wastewater market. 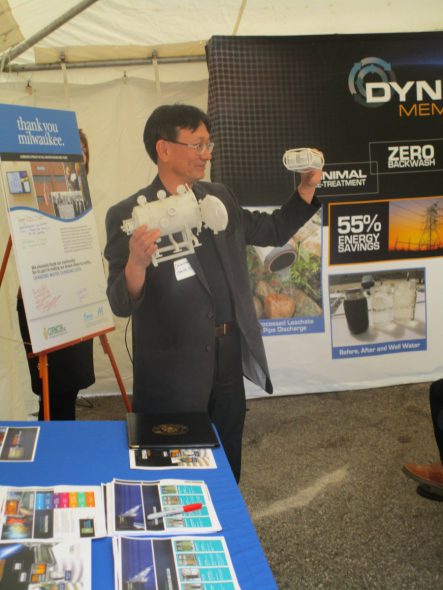 Douglas Hwang, president of CORNCOB, Inc., holds up a small replica of Alfie as he discusses the technology before a group of several dozen persons. Photo by Dave Fidlin.

In a nutshell, CORNCOB President Douglas Hwang describes Alfie as a high-tech filtration system that is able to effectively remove a variety of materials — from benign to serious — from water.

Hwang, who was one of a handful of CORNCOB representatives who addressed a crowd of several dozen people during a demonstration event, said Alfie is aimed at solving problems locally, in other areas of the U.S. and beyond the country’s borders.

“We are delighted to have come up with a technology that is able to do magical things in very simple ways,” Hwang said at the demonstration, held Friday, March 24, outside Milwaukee Metropolitan Sewerage District’s offices.

While water filtration technology is not a revolutionary concept, Hwang and other CORNCOB representatives said their Alfie machine offers cutting-edge solutions that have not been available elsewhere.

The technology infused into Alfie reportedly requires a fraction of the energy and cost of conventional water treatment methods. Hwang said the product also is flexible enough to serve the full swath of water consumers — including residential, municipal, industrial and commercial users.

In its relatively young life, CORNCOB and Alfie have received the support of some heavy hitters, locally and elsewhere.

It was one of the startups selected for this year’s BREW Accelerator program by Milwaukee’s nonprofit, 180-member Water Council, which has lauded CORNCOB’s technology. Alfie can further the group’s mission of supporting a burgeoning industry by taking strides toward solving the global shortage of safe drinking water.

Karen Frost, vice president of business development with The Water Council, said CORNCOB is one of 27 startups with which the organization has forged a relationship.

“They’re one successful example of the many startup companies we work with,” Frost said. “The company’s ongoing progress … demonstrates its potential to expand beyond Milwaukee and deliver solutions to a world in need.”

On a broader scale, CORNCOB also has caught the attention of companies on the other side of the globe. E.L. Industries International, a Chinese distributor, has invested in CORNCOB’s technology.

“We became interested in CORNCOB’s technology because of the one-step process that could save our customers energy and money,” Dan Bodendorfer, managing director of E.L. Industries International, said in a statement.

Because it is a low-cost operation, Hwang believes the future for Alfie is bright.

“Since we spend very little money on energy, we can literally take wastewater treatment plants off the grid,” Hwang said, though he pointed out no such maneuver has yet to take place

Although CORNCOB has begun forging relationships with companies in other areas of the globe, Hwang said he believes his company — and Alfie — belong in Milwaukee.