On the Road to Wales

By Dave Schlabowske, Bike Federation of Wisconsin - Mar 24th, 2017 02:51 pm
Get a daily rundown of the top stories on Urban Milwaukee 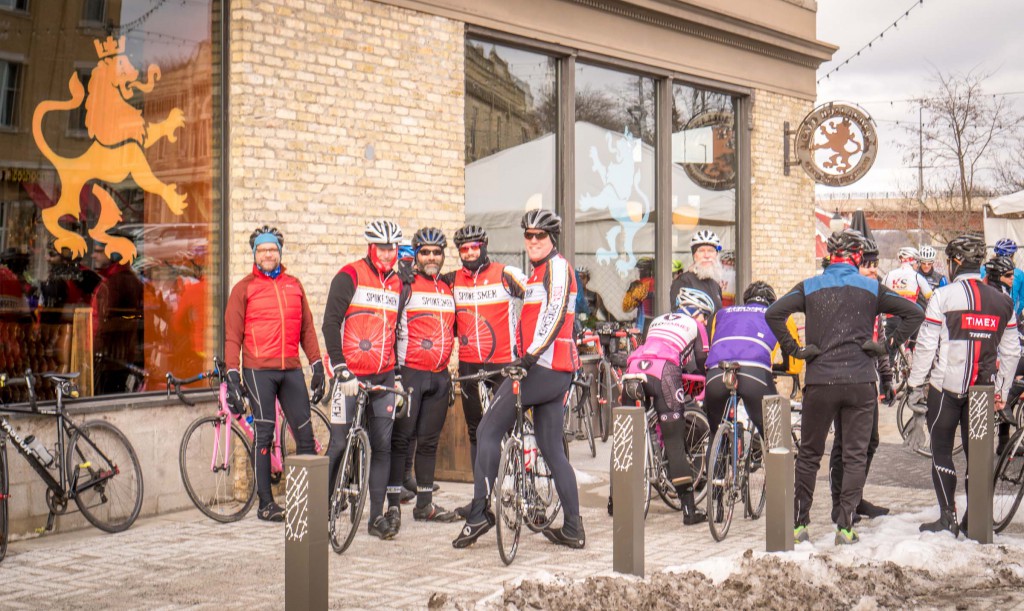 A hardy group of thirty Westsiders showed up at the Cafe Hollander in Wauwatosa for the unofficial Ride to Wales.

With the late season snow and a pretty long 86 mile route on a partially snow covered gravel, the crew from Ben’s Cycle decided to postpone their long ride to Rome, the second official ride in this year’s Wisconsin Spring Classic Series presented by Lowlands Group. They had plans to grill out, buy beer and soda, etc., and that would be a lot of work for a low turnout. So stay tuned for an announcement on when their ride to Rome will be.

With an open Sunday and no official Spring Classic, the Bike Fed threw together a last minute route from the Wauwatosa Cafe Hollander to Wales. The trails between Hollander and Mama D’s Coffee in Wales is plowed, so the shorter 50 mile route would give the hard core tifosi their Spring Classics fix this weekend. 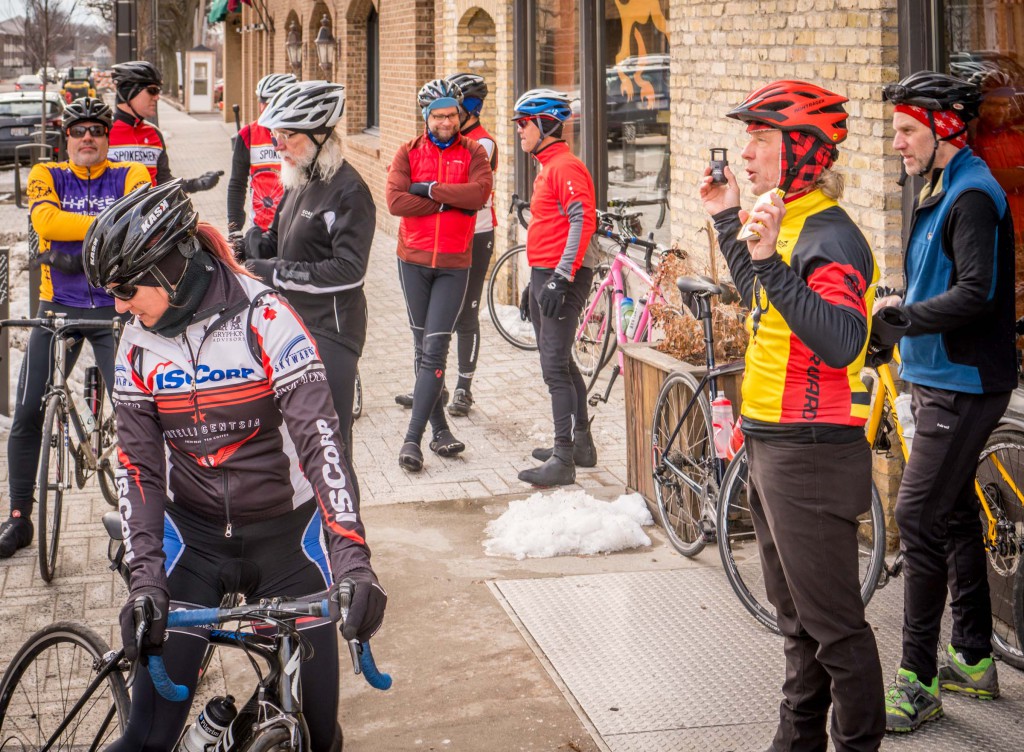 Yeah, that’s me talking and nobody listening. You’d think I would have taken the hint by now.

A nice group of thirty riders showed up for the ride, despite the cloudy skies, 31 degree temperatures and 13 mph wind. The Lowlands Group stamps came in, so I was able to put a completion stamp for last week’s ride to Paris in the Spring Classic passports. I also stamped the Ride to Rome, but noted the shorter distance for this ride to Wales. When Ben’s reschedules, I will add a second stamp for anyone who does the Ride to Rome.

Our larger group was met on the New Berlin Recreation Trail by a smaller contingent of Waukesha riders. That was nice as they helped guide us through the many angled streets of downtown Waukesha, west on the clear section of the Glacial Drumlin and on surface streets the final miles to Wales. 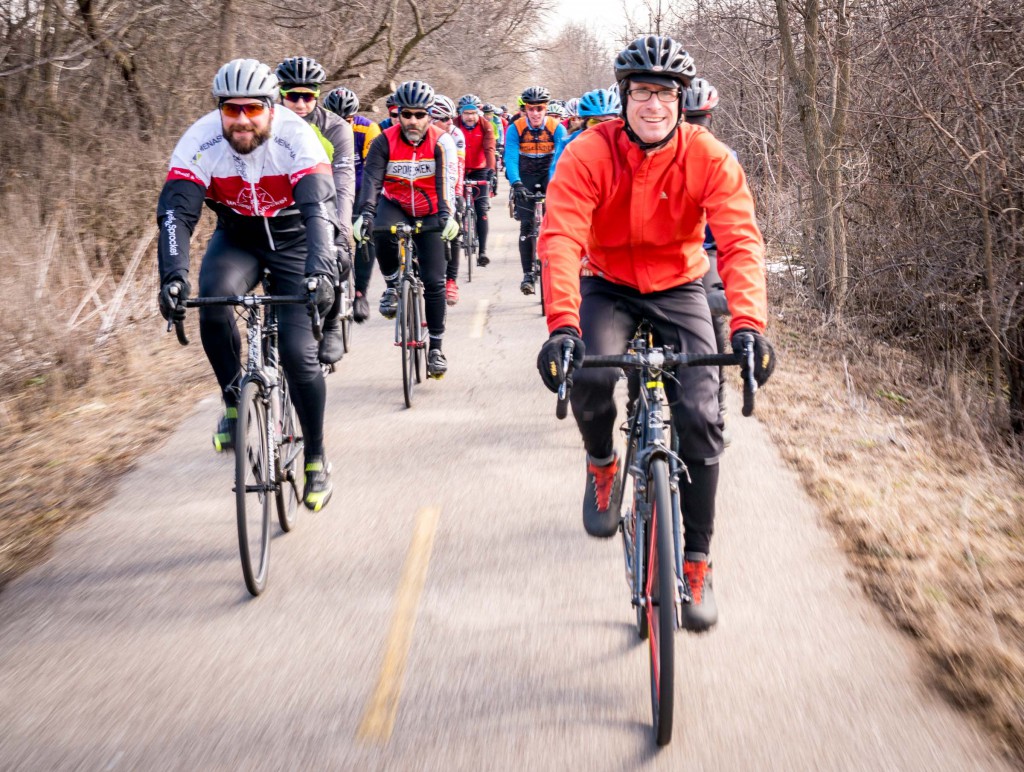 Thanks to Ronsta Ramble Ron Stawicki for leading the group west to Wales. 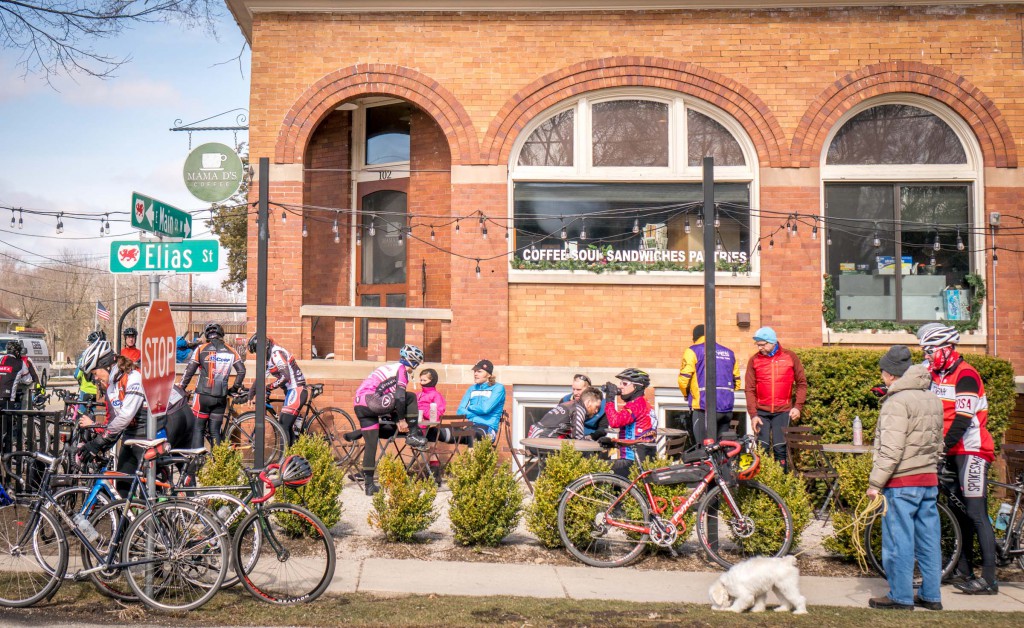 Everyone seemed to enjoy the mid-ride stop at Mama D’s in Wales.

The young, but experienced baristas behind the counter at Mama D’s pulled a fine cortado, despite being slammed by a big group of lycra-clad riders. The Main Street coffee shop is visible from the Glacial Drumlin right in Wales. In 1840, John Hughs and his family settled in the area because it’s rolling hills reminded him o his Welsh homeland. Within two years, there were 100 Welsh settlers in the Village of Wales, thanks to the recently built Chicago and Northwestern train depot. 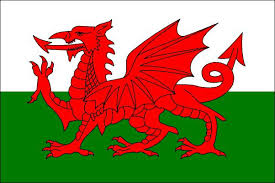 The Village of Wales uses the Red Dragon from the Welsh flag as their town logo.

Many of the streets in Wales have Welsh names, but the Village has an online pronunciation guide to help their residents with the tongue twisters: 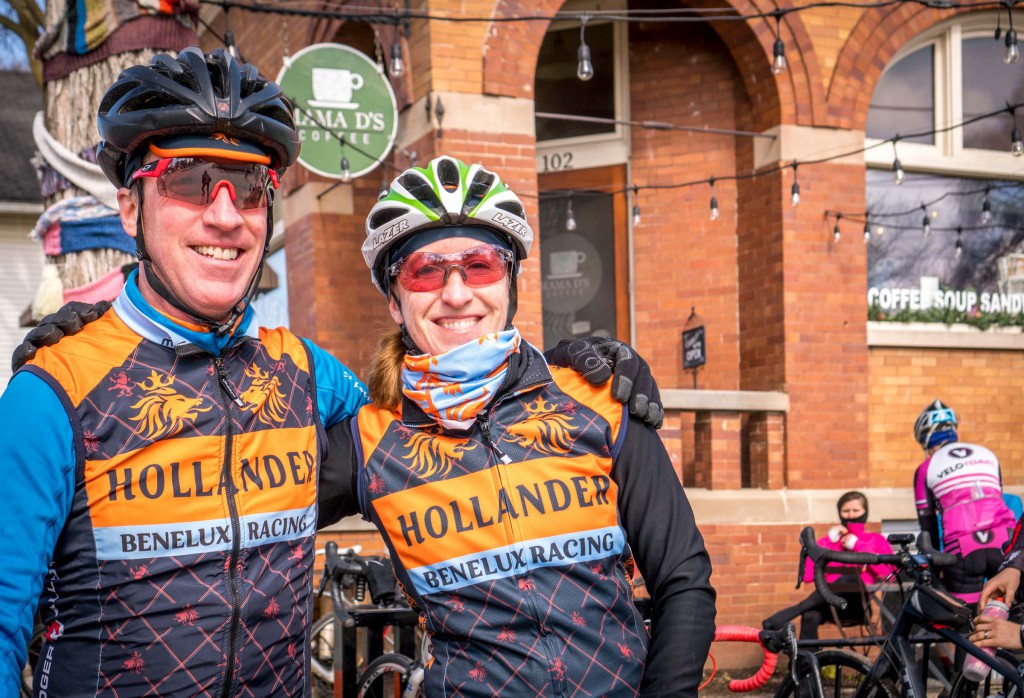 Steve and Erin flying the Lowlands Team colors on the ride.

After refueling with delicious coffee, cookies and pound cake (they have great, inexpensive bakery at Mama D’s), the riders pointed their wheels east. One interesting note is that Wales is the highpoint on the Glacial Drumlin Trail, so although the route back was into the 13 mph wind, it was mostly downhill. I have always suggested Wales should adopt “It’s All Downhill From Wales” as a village motto.

The elevation profile from Wales to Wauwatosa shows a drop about 400 feet overall.

Everyone who joined us earned themselves 84 bonus Flanders Points this ride, (rounding all numbers up) as follows: 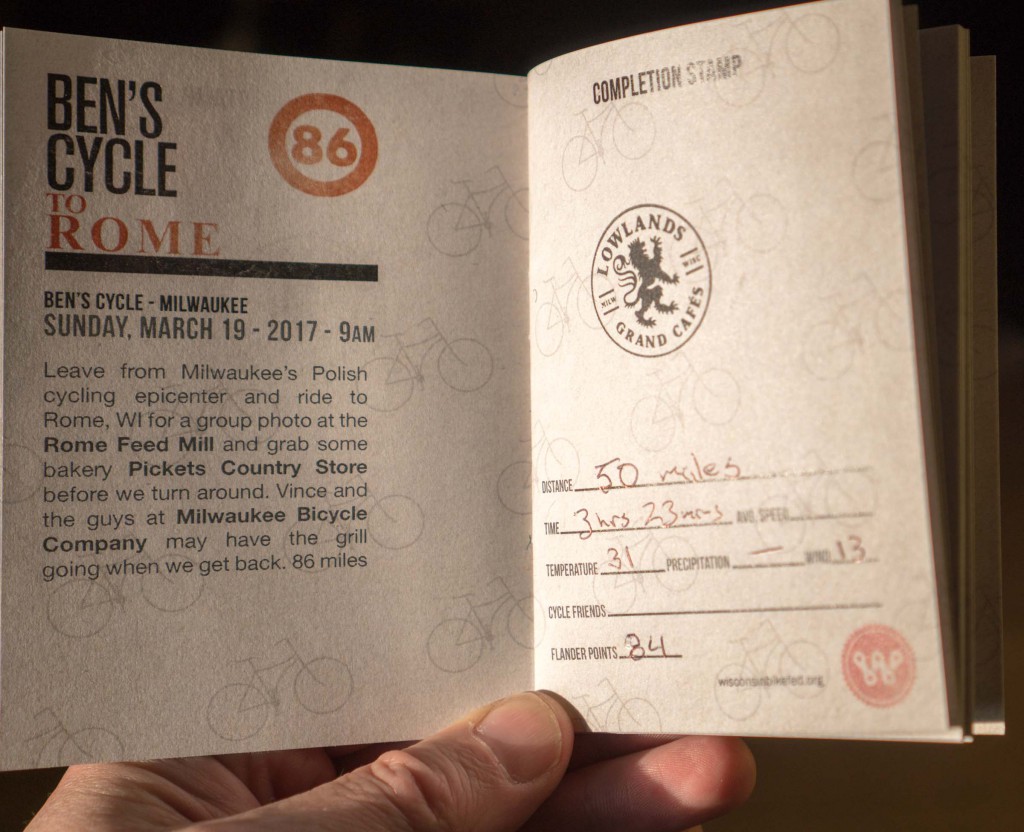 The Flanders Points Algorithm is explained in the passports, and rides with colder temperatures, precipitation and higher winds get extra points.

You can see all the future Spring Classic routes at our Eventbrite page. Please let us know which routes you think you will do (no worries if you change your mind), and sign the online waiver. You can also order your passport online too. Next week we ride from Wheel & Sprocket’s Appleton Store to the small diary town of Holland.

Register (free), sign the online waiver and get your passport here»