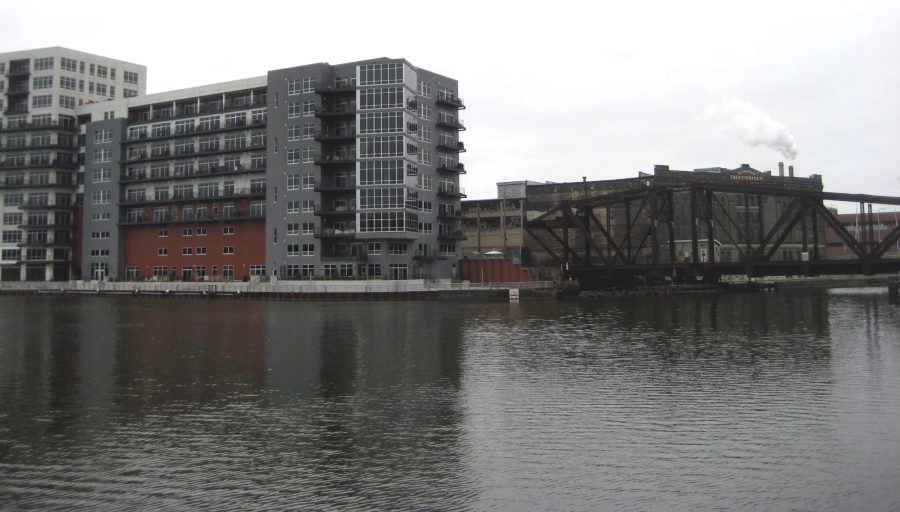 The Point on the River. Photo by Michael Horne.

The accelerating pace of suburban businesses relocating in downtown and nearby has been documented by Urban Milwaukee. Most recently Jeramey Jannene studied the influx of Millennials drawn by jobs and walkability.

The new workforce embraces the live/work/play dynamic of a great city, and employers have to go where the talent is located, because they’re not finding it on Moorland Road. Increasingly, the talent includes high-level executives, like Alex Molinaroli of Johnson Controls and former Manpower head Jeff Joerres, both of whom have moved into town.

Joerres brought his corporate headquarters with him, and JCI has been long rumored to plan a downtown high rise to replace its suburban headquarters.

It is time to add Gregory P. Nickerson to the list of urban dwellers who are considerably shortening their commute by the simple expedient of moving their company headquarters from the suburbs to downtown Milwaukee.

This is a significant reversal of practices of decades past, when corporate headquarters moved out to be near the executives’ homes in cities like Mequon. This would oblige most workers to commute by automobile, since few could afford to live in these suburban areas where homeownership was the norm and apartments were discouraged.

Nickerson is the CEO of Bader Rutter, Milwaukee’s largest advertising firm. It was founded downtown in 1974, but exiled its operations to Brookfield’s Bishop’s Woods office park in 1979. This spring Nickerson announced the firm would move its 220 employees downtown to the site of the former Laacke & Joys building, a riverfront property at 1433 N. Water St., in early 2017.

In announcing the move, he said the location “will help us attract the right kind of talent” to the business-to-business firm.

Nickerson himself had already made his settlement further downstream, at The Point on the River, in the Walker’s Point neighborhood, where he and his wife Jill Nickerson purchased a 3,080 square foot luxury penthouse on the top floor that resulted from two apartments being combined into one.

The couple paid $666,850 in September 2012 for the home with its three bedrooms, three full and one half bathrooms, along with three parking spots in the 147-unit complex that was renovated in 2006. The unit’s new steel-framed construction dates to that year. It is among the floors added to the 1910 Terminal Storage Building, which is of massive reinforced concrete construction.

Today, the residence is valued at $944,000, a handsome gain, but one that reflects the Nickerson’s investment in the formerly “white box” unit.

As the Mandel Group describes it, its Point on the River complex offers “sublimely luxurious penthouses and exquisitely detailed condominiums” and an “urban luxury you won’t find in any suburb,” with “stunning city views… access to the marina and boat slips, controlled access lobby with concierge service, business center, heated indoor parking and fitness center. And there’s never a dull moment with our private screening theater and social networking lounge.”

The home is just about a mile and a half from the new headquarters building of Bader Rutter, and on a nice day Nickerson could probably even canoe to work if he chose, or maybe gather the staff in a pontoon boat and sail them to his home for a penthouse luncheon. They might be able to look down on the retired Joerres sunning himself at leisure on his much lower rooftop deck across the stream. They could probably have the whole affair catered by Screaming Tuna, a restaurant located downstairs in the building, then head over to Purple Door ice cream a block away for a treat and make it back to work in plenty of time.

Significantly, the home is quite near the Amtrak station, which Nickerson uses to get to meetings in Chicago. The firm has offices there and in Lincoln, Nebraska.

Recently, he tweeted a photograph of a pigeon on the floor of Chicago’s Union Station, entitling it “the joys of travel.”

The joys of travel. Pigeon watching at Amtrak station in Chicago. pic.twitter.com/o2UsWjL3mW

Nickerson has worked at Bader Rutter since 1985, and has been at the helm of the firm since 2001, where he succeeded co-founder Ron Bader. At the time the firm had annual billings of about $100 million, and 150 employees working out of Bishop’s Woods. Nickerson came in from the PR end of the business, which is rare in the advertising racket.

Working in such a stultifying suburban atmosphere apparently did little to stifle the creativity of the Bader Rutter folks, since the firm consistently wins local, regional and national awards. But who knows what sparks of inspiration will fly through their minds in the fertile grounds of N. Water St. and environs?

With the move to their new 66,000 square foot space, Bader Rutter employees will, at the very least, see the spectrum of their luncheon options expand considerably. Brady Street will just be a brisk walk uphill, and Lakefront Brewery will tempt for the afterwork hours.

Chances are the talent that follows Nickerson to Milwaukee will cross paths with him in their daily peregrinations, since the city has a democratizing effect that is alien to the suburbs. Bosses and employees both can understand the allure of a downtown walk to take in the various high rises and maybe a little sightseeing along the streetcar route that will bring even more jobs, workers, and executives to the city. The convenient Nickerson residence is just blocks away from the growing collection of Walker’s Point restaurants and attractions. I don’t know if he would fire up a stogie to celebrate the move, but he could head over to Shaker’s Cigar Bar to do so, or check out the wonderful redevelopments on S. 5th St. 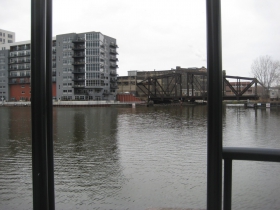 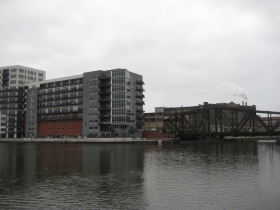 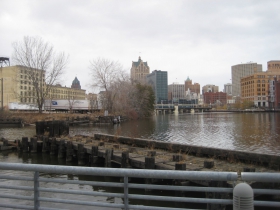 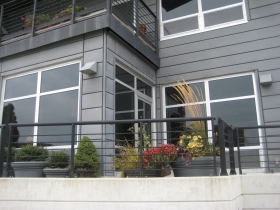 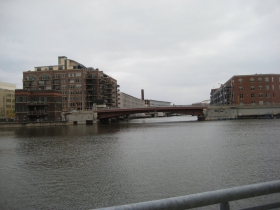 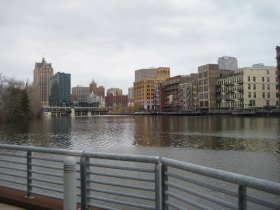 How Milwaukee Is It? The residence is about .75 miles from Milwaukee City Hall.