By Dee J. Hall, Wisconsin Center for Investigative Journalism - Jul 15th, 2016 03:34 pm
Get a daily rundown of the top stories on Urban Milwaukee 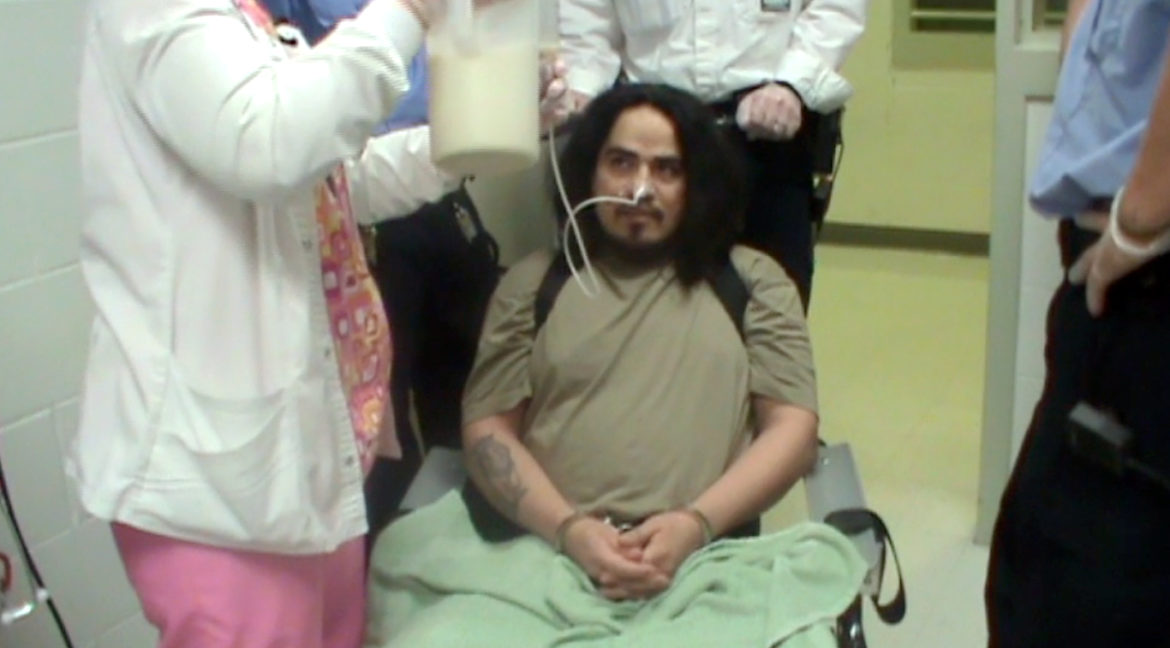 Waupun Correctional Institution inmate Cesar DeLeon is shown being force fed June 20 in this screen grab from a video Thursday in Dodge County Circuit Court. DeLeon, who along with several other Wisconsin inmates is hunger striking to protest long-term solitary confinement, was unable to convince a judge to withdraw the force-feeding order. Photo courtesy of the Wisconsin Department of Corrections.

A Dodge County Circuit Court judge on Thursday rejected a request by Waupun Correctional Institution inmate Cesar DeLeon to stop force feeding him after DeLeon testified that he would continue hunger striking if the court’s force-feeding order were lifted.

DeLeon had asked Judge Steven Bauer to discontinue force feeding by nasogastric tube or, in the alternative, to be fed intravenously. Waupun officials have been force feeding DeLeon for about a month after he and several other Wisconsin inmates began refusing food in an effort to end long-term solitary confinement in the state.

During Thursday’s hearing, DeLeon also said he was on a 40-day, 40-night religious fast and that forcing him to eat was violating his religious rights. 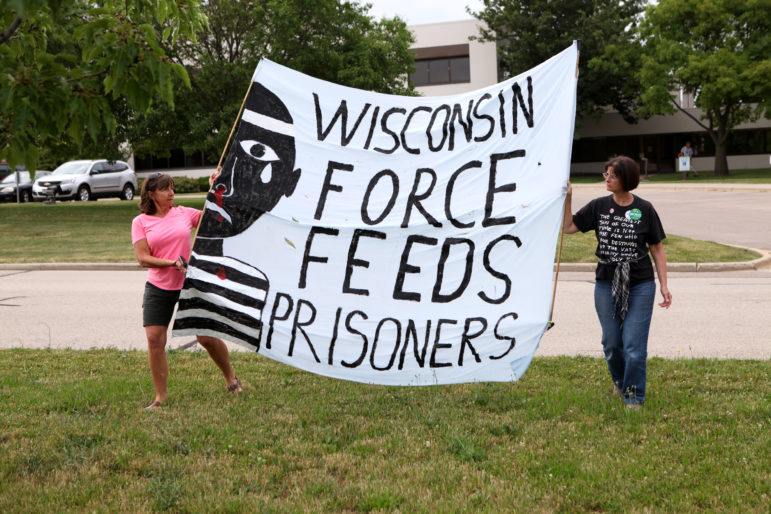 Wendy Turk, left, and Mary Jo Fesenmaier hold a banner decrying the force feeding of Wisconsin prisoners during a rally outside the state Department of Corrections headquarters in Madison on July 5. Hunger striking prisoners and their advocates are seeking an end to long-term solitary confinement. Photo by Coburn Dukehart of the Wisconsin Center for Investigative Journalism. 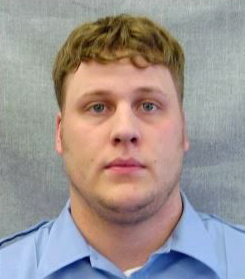 Waupun Correctional Institution officer Joseph Beahm has been the subject of dozens of allegations of abuse by prisoners in solitary confinement, including recent charges leveled by hunger striker Cesar DeLeon. Photo courtesy of the Wisconsin Department of Corrections.

But Bauer rejected those requests. He cited the testimony of Jeffrey Manlove, a doctor at Waupun, that DeLeon’s health would deteriorate if he returned to hunger striking, which he vowed to do during a video appearance in court Thursday. Bauer also said DeLeon’s religious rights do not trump the state’s interests in keeping him alive and well.

“The prison cannot allow him to die on a hunger strike,” the judge said.

DeLeon is among at least eight prisoners at two institutions who have participated in the hunger strike, which began in early June.

DeLeon presented a 24-minute videotape of his June 20 force feeding in which he claimed officer Joseph Beahm, who has been the subject of more than two dozen allegations of abuse since 2011, momentarily withheld from him the water used to help place the feeding tube from him. Patients drink water during the insertion of a feeding tube in the nose to close the valve that keeps food and liquids from getting into the lungs.

Officer Kyle Tritt, who witnessed the tube feeding, testified that while DeLeon and Beahm argued over placement of the water straw, “I did not see that he was doing anything on purpose.” 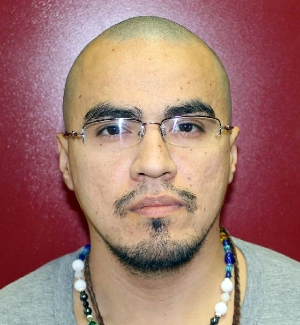 Cesar DeLeon is among a small group of Wisconsin inmates participating in a hunger strike to end long-term solitary confinement. Photo courtesy of the Wisconsin Department of Corrections.

A Wisconsin Center for Investigative Journalism review of electronic court records shows the state Department of Corrections has sought force-feeding orders at least 20 times in the past 11 years.

That activity has accelerated in recent months with eight cases filed in the past five weeks in apparent response to the ongoing hunger strike at Columbia and Waupun correctional institutions aimed at ending long-term solitary confinement.

Based on the dates of the orders and the location of the inmates at Waupun and Columbia, at least eight inmates have participated in the current hunger strike, which began in early June, according to the Center’s analysis. Other inmates have written letters to advocates saying they also are refusing food, but there is no independent confirmation of their participation.

In an interview, Dr. Steven Miles, a professor of medicine and bioethics at the University of Minnesota-Twin Cities, said force feeding of prisoners is condemned by most major medical groups, including the American Medical Association and the International Committee of the Red Cross. The World Medical Association has declared that “the forced feeding of hunger strikers is unethical and is never justified,” calling the practice “inhuman and degrading.”

Miles has studied force feeding in Turkish prisons and among detainees at Guantanamo Bay, Cuba. He said prisoners’ refusal to eat should not be viewed in medical terms alone.

Among those who underwent force feeding was Waupun inmate Joshua Scolman. He wrote in a letter that he ended his hunger strike after his nose was broken during one of his first force-feeding episodes June 25. Scolman said he had warned officials that he had a deviated septum and it would be “impossible” to force feed him. 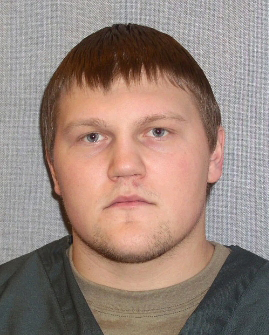 Waupun Correctional Institution inmate Joshua Scolman claims a prison employee broke his nose while inserting a feeding tube on June 25, forcing him to end his hunger strike. Photo courtesy of the Wisconsin Department of Corrections.

“When they tried to force feed me, the nurse could not get the tube down my nose and I couldn’t stop gagging, puking, and so I turned pale and almost passed out,” he wrote. “Because of how many times they were trying, the tube tore open my sinuses and there was blood, so they stopped for the night.

“The next morning they tried again and this time they broke my nose and it was bleeding all over the place … they continued to try to shove the tube up my nose until the nurse gave up and decided to send me to the hospital.”

Scolman said he spent two days in the hospital. The Center has requested a copy of the videotape of the session in which Scolman’s nose allegedly was broken. The department said it is investigating both DeLeon’s and Scolman’s allegations.

Some of the current rules under which the Department of Corrections operates were set in the case of Waupun inmate Jerry Saenz, who began refusing food in 2005 to protest conditions in solitary confinement and lack of mental health treatment. After three weeks of little food and water, the state got a court order to begin force feeding Saenz.

Saenz argued the prison had no legal right to force medical treatment on him. In its 2007 opinion upholding the force feeding, the Wisconsin Court of Appeals noted the complexity of the issue. 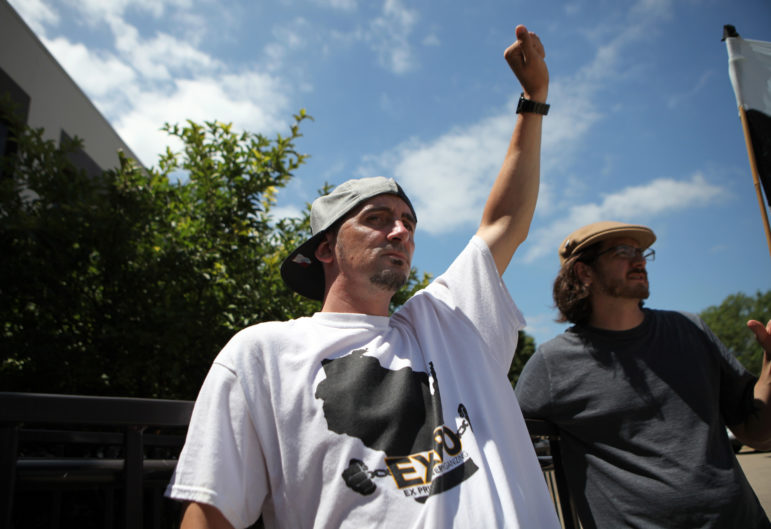 Alan Schultz raises his fist as the Forward! Marching Band plays “Solidarity Forever” during a rally outside the state Department of Corrections headquarters in Madison to protest long-term solitary confinement, on July 5. Schultz, 33, is a former inmate who spent time in isolation at Ethan Allen School for Boys and New Lisbon Correctional Institution. Photo by Coburn Dukehart of the Wisconsin Center for Investigative Journalism.

The appeals panel acknowledged that Saenz had a “constitutional liberty interest in avoiding unwanted medical treatment” but that the department also had “legitimate governmental and penological interests in preventing him from starving to death.”

That court eventually sided with prison officials, finding that “under appropriate circumstances and after affording procedural due process, the department may forcibly feed and hydrate an inmate.”

But the appeals panel also found that Saenz was entitled to a hearing on the merits of the force-feeding order, similar to the one held Thursday in DeLeon’s case. 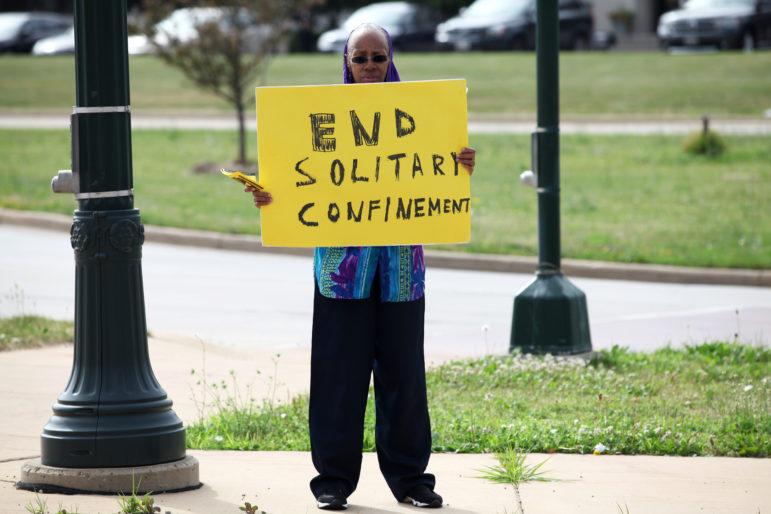 Sister Linda Muhammad holds a sign during a rally outside the state Department of Corrections headquarters in Madison, to protest long-term solitary confinement. Her son, Robert Tatum, was being held in disciplinary solitary confinement at Waupun Correctional Institution. Photo by Coburn Dukehart of the Wisconsin Center for Investigative Journalism.

Bissonnette — who had himself strapped to the same chair in which Lilly had spent up to six hours a day — described the conditions of the force feeding in stark terms, noting the discomfort of the feeding chair, the cold temperature in the room, the fact that Lilly was handcuffed from behind and that he frequently vomited when force fed.

“It is costing taxpayers over $200,000, probably closer to $300,000, a year to infringe upon Mr. Lilly’s constitutional right to refuse medical care,” Bissonnette wrote.

“Whether what has happened to Mr. Lilly in the course of the DOC’s force feeding processes over the last five years resulted from some form of bureaucratic oversight, benign neglect, purposeful conduct, carelessness, or something else, the consequences to Mr. Lilly have been exactly the same … and they are not good.”

Back in the News: Biden Buries Trump in State’s TV Ads by Bruce Murphy