Bill Maher roasts everyone he can think of at his Riverside show. 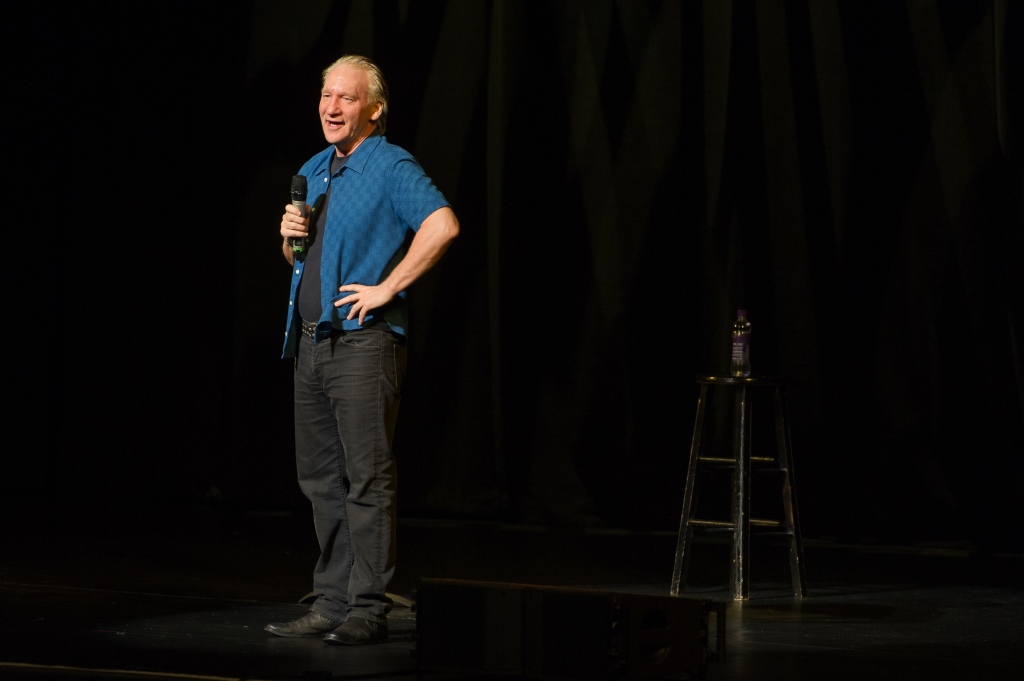 When Bill Maher stands in front of thousands of people, you can be sure someone in the public eye is about to be thumped with a large sock full of horse manure, to borrow that image from Woody Allen’s movie Annie Hall.

There was no opening act or quirky videos on a screen before Maher’s show at the Riverside on Sunday, just a music stand, a bottle of water atop a stool. By the time Maher took the stage about 15 minutes after the scheduled start time, the audience was primed and ready for the insults to fly.

Maher, comedian and host of HBO’s Real Time with Bill Maher, embraced an adoring and at times too involved audience during what appeared to be a sold-out show. As anyone who knows his act will tell you, nothing is sacred. In fact, nothing is remotely associated with sanctity.

Donald Trump was the focus of the first portion of the show—no surprise there. Trump and Maher have a history. A few years ago Maher challenged Trump to produce a birth certificate that proved he wasn’t the offspring of an orangutan. The GOP presidential candidate returned fire by suing Maher in court but eventually dropped the suit.

Maher, like many Americans, wonders when Trump will finally implode after saying something that’s clearly bat-shit crazy. “After he said John McCain wasn’t a war hero after being captured, I thought that would be it.”

Then, after Trump referred to Fox anchor Megyn Kelly’s menstrual cycle and mocked a man with cerebral palsy, Maher was sure the end had come for Trump. Not even close.

“I don’t know what he would have to do to turn off his voters,” Maher said. “He’d have to call Reagan a fag or fart in Jesus’ face.”

Maher set his sites on Wisconsin’s Paul Ryan for eventually endorsing Trump, while tipping his hat to George H.W. and George W. Bush and Mitt Romney for their steadfast refusal to back Trump. But Maher quickly turned on Romney to say the former GOP presidential candidate has the “oratorical skills of an On-Star operator.”

To those Republicans who call President Obama the “most racist president in history,” Maher wondered, does that list include the presidents who actually owned slaves?

Maher noted he’s heard some of Obama’s young supporters say they are disappointed in Obama, saying he ‘didn’t follow through on his promises.’

“Just because they didn’t cover it on TMZ doesn’t mean he didn’t do something,” Maher quipped.

He noted Obama created no new war, added no new troops on the ground, visited Cuba and executed a federal mandate so five million people could continue to work. In all, he suggested, Obama did a pretty good job not disappointing people.

Maher assailed what he calls ‘stupid intelligent people.’ These would be folks who are clearly in possession of a full brain, but choose to use it sparingly.

He all but named the patron saint of such people as former GOP candidate, Ben Carson. “Carson is a Seventh Day Adventist, a neurosurgeon, and doesn’t believe the world is more than five-thousand years old. Seventh Day Adventists are upset the world didn’t end as prophesied in 1844. They call that day the ‘Great Disappointment.’ I’m kind of hoping the world continues.”

Maher briefly turned his attention to guns. He owns one for protection, but says he doesn’t love guns and doesn’t really think hunting is a sport.

Maher says people accuse him of being anti-Muslim, to which Maher vehemently replies. “No. I’m anti-bad idea, no matter who has it. Treating women as second-class citizens is a bad idea. Honor killings are a bad idea.”

Despite being raised Catholic, Maher didn’t spare his own religious roots. “Christianity is an intellectually embarrassing Bronze Age myth.”

He urged his audience to not count out Bernie Sanders just yet. Maher says he envisions Bernie in the oval office with clutter all over his desk, boxes of files on the couch, an egg salad sandwich half-eaten on his desk. He removed imaginary boxes from the couch so the Queen of England could sit.

“Sorry, it’s my busy season,” Maher said as Sanders. “Would you like half an egg salad sandwich?”

Maher closed with a funny bit about the benefits and pains of using Cialis and a mash-up of religion and Abbott & Costello’s “Who’s on First?” routine.

Despite the love clearly coming from the audience, some attendees acted as though it was a comedy club atmosphere and shouted random topics and names to Maher. “I’ve got things prepared,” Maher said. “And they’re a billion times better than the things you’re shouting out.”

After several warnings to the audience over the public address system about not having any electrical gadgetry, Maher spied a woman in the front row using her phone. A few moments of playfulness ensued before Maher snared her phone and kept it for the rest of the show, like a teacher taking away a kid’s Snicker bar in class. Fortunately for the woman, Maher had made a New Year’s resolution to avoid going off on people using their mobile devices during his act.

And Maher remembered to give the phone back to the woman at the show’s end. It was one more moment in real time with Bill Maher.