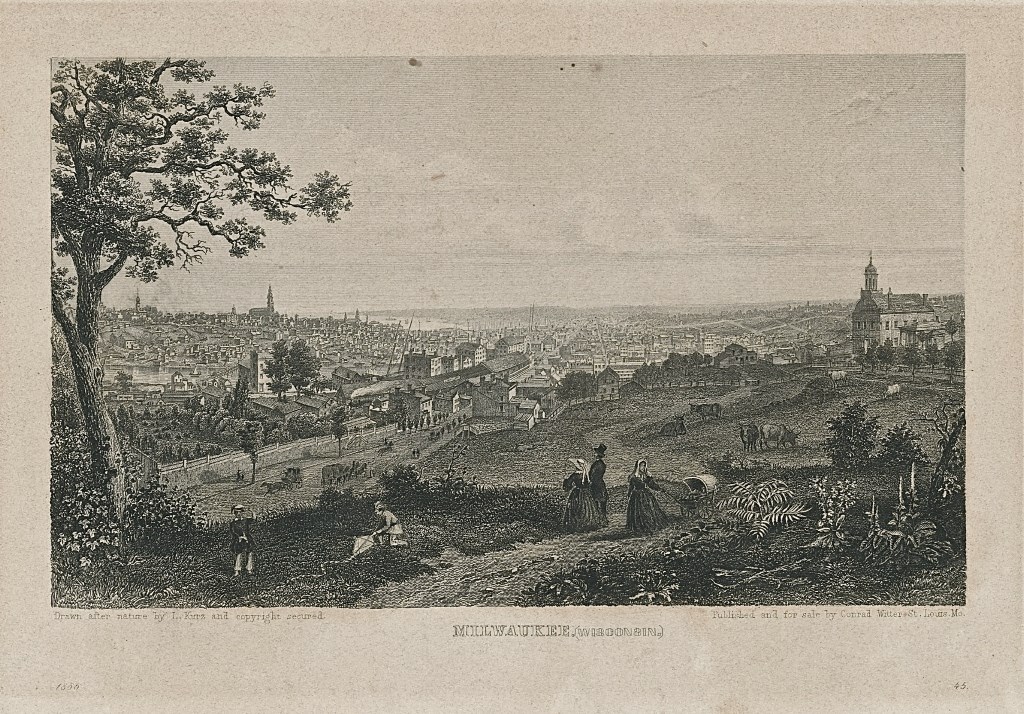 The Old City, About 1858. Image courtesy of Jeff Beutner.

Born in 1833 in Salzburg, Austria, lithographic artist Ludwig Ferdinand Joseph Kurz von Goldenstein became nationally known in America as Louis Kurz, as  biography by the Museum of Wisconsin Art recounts. “He was born into a family of Austrian actors who immigrated to the United States in 1848. Joseph Kurz, his father, organized some of Milwaukee’s earliest German language stage productions. As a teenager Louis painted scenery for his father’s stage productions. Later, around 1855, he worked with Wisconsin artist, Otto Stietz painting stage scenery for plays at Milwaukee’s Market Hall.”

“His lithography training probably began in 1853 when his family moved to Chicago,” the bio goes on. “By 1856 he was back in Milwaukee and associated with lithographer Henry Seifert. He briefly served in the Civil War until 1863, when he returned to Milwaukee and founded the lithographic firm of L. Kurz and Company.” In the second half of the 1850s and early 1860s Kurz would produce lithographic views by himself and with his business partner, Siefert.

He also was an artist who did easel paintings of religious and historical subjects, of which “Gambrinus,” a whimsical painting of the legendary inventor of brewing, is now in the Milwaukee County Historical Society collection. The lithographic views he produced of Wisconsin are prized as well as being quite rare. Among them were views of Waukesha, Racine, Appleton, Oshkosh and a few Milwaukee views including this one and a splendid one of the Nunnemacher distillery, located on the south side of the city. He also published a series entitled Chicago City Views.

In 1880 Kurts formed a partnership with Alexander Allison and established “Kurz and Allison,” which produced chromolithographs up to 1899. The most famous was a series entitled Battles of the Civil War: The Complete Kurz and Allison Prints 1861-1865. Kurz and Allison also issued a series of prints showing such Civil War figures as Jefferson Davis, Abraham Lincoln, Ulysses S. Grant, and James A Garfield in domestic settings, surrounded by their families. Kurtz lived a long life, dying in 1921 in Chicago.

This is one of his views of Milwaukee, an engraving published by Conrad Witter of St. Louis. In the book Milwaukee Illustrated, produced for a 1978 exhibit at the Milwaukee Art Center (now Art Museum), the author and exhibit curator Thomas Beckman dates this view to around 1858.

The view looks south from around 3rd St. and Walnut. An exaggerated St. John’s Cathedral dominates the skyline to the left while the sixth Ward School is the large building on the right. Of special note is the house to the right of the school. This is the Benjamin Church house, a lovely Greek Revival structure that was much later moved to its current setting in Estabrook Park.

This engraving first appeared in a German-language book also published in the 1850s. This Kurz view is a bit unusual since most of his surviving work is of lithographs rather than engravings.