Medicaid changes could help address disparities in Wisconsin. Will Walker accept the aid?

By Jon Peacock, Wisconsin Budget Project - May 19th, 2016 03:03 pm
Get a daily rundown of the top stories on Urban Milwaukee 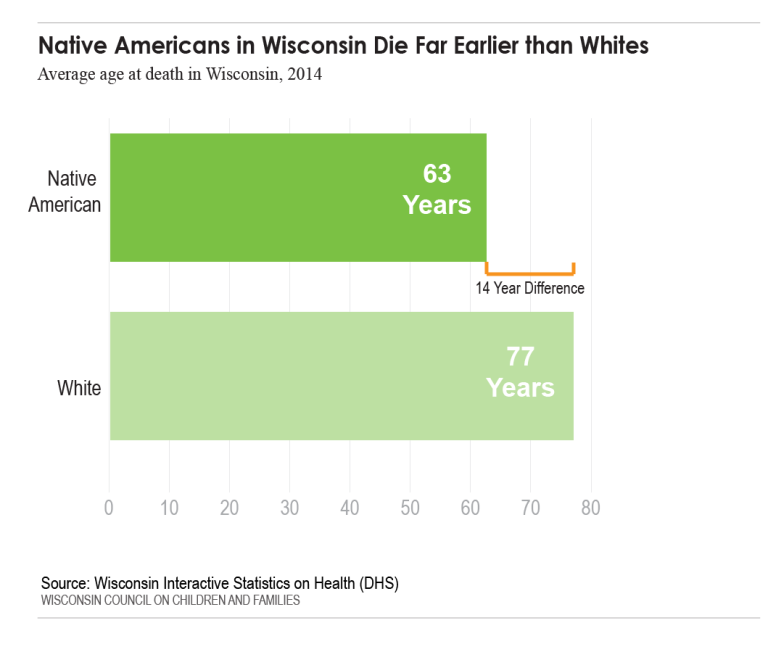 A change in federal Medicaid policy announced in February creates an exciting opportunity to improve health care for Native Americans. It’s an opportunity that Wisconsin tribes and state officials should seize in order to help alleviate the extreme disparities in health between Native Americans and whites in Wisconsin.

The revised interpretation of Medicaid reimbursement policy expands the scope of health care services for Native Americans that are fully paid for by the federal government, without the usual requirement for state matching funds. In the past, the federal government paid 100% of the cost of Medicaid services provided directly by Indian Health Services (IHS), but not for health care provided outside of IHS facilities. Under the new policy, federal funding will also cover the full cost of Medicaid services delivered to American Indians by providers under contract with IHS, if IHS or a tribal practitioner refers the Medicaid patient and continues to oversee their care.

A new Wisconsin Council on Children and Families (WCCF) report, “Closing Gaps in Native American Health,” reveals the extent of the disturbing disparities in health indicators between whites and Native Americans in Wisconsin. For example:

The policy change could yield significant savings in the Medicaid budgets of states with substantial Native American populations. South Dakota officials are exploring the possibility of using the savings to pay for the state share of costs for an expansion of Medicaid eligibility.

In Wisconsin, a DHS spokesperson, Claire Yunker, told Wisconsin Health News that it isn’t clear whether there will be much savings. According to a story in WI Health News, “Wisconsin had a total of $21.5 million in tribal Medicaid expenditures” in 2015. Most of that was reimbursed by the federal government, but Yunker said the state paid $3.9 million for services at IHS and tribal facilities not eligible for full federal funding. DHS doesn’t know how much of that state spending currently meets the conditions for full federal reimbursement, but Yunker said the department is “working through the operational and potential fiscal implications of this new federal interpretation.”

Whether the state can save money for the current Medicaid services provided to Native Americans is not the key question. The much more important issue is figuring out how best to take advantage of the new opportunity to fill gaps in health care services for Native Americans in Wisconsin, including things like behavioral health services and improved care coordination.

Jerry Waukau, health administrator of the Menominee Indian Tribe of Wisconsin, said that tapping the full potential of the broader eligibility for 100 percent federal funding will not be a simple thing to accomplish because there are administrative challenges for tribal officials and the Wisconsin Department of Health Services to overcome.

“Despite those challenges, we’re optimistic that the policy change provides an avenue for removing some of the barriers to increasing access to care and improving health care outcomes for tribal members,” Waukau said.

By Jon Peacock and Sashi Gregory