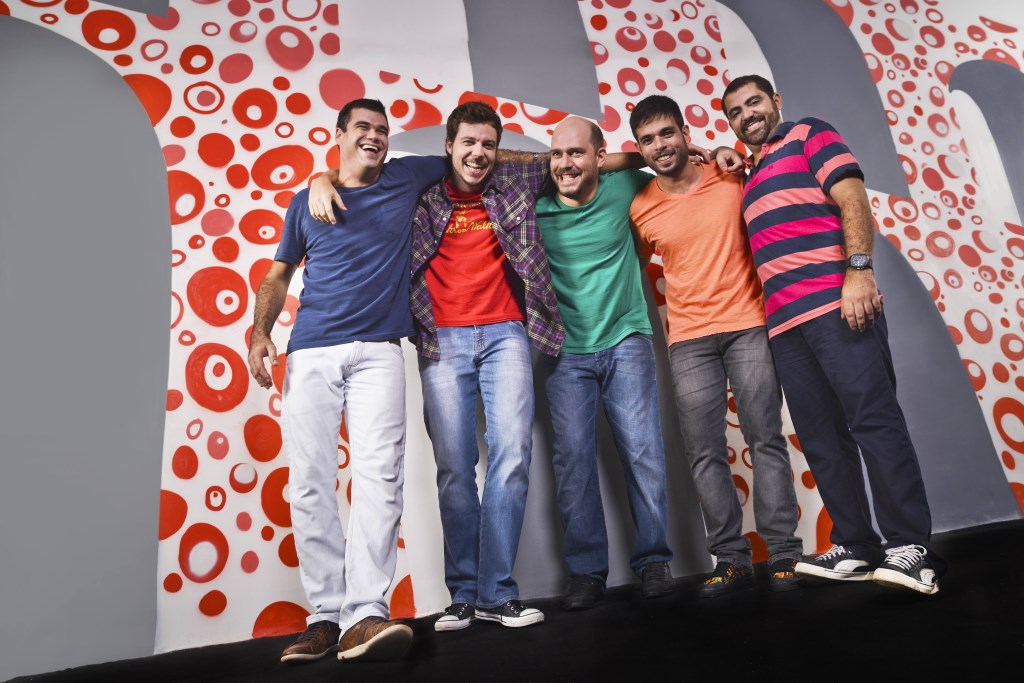 Casuarina. Photo courtesy of the Sharon Lynne Wilson Center for the Arts..

Despite living nearly 6,000 miles away in Rio de Janeiro, musician João Cavalcanti has something in common with most Wisconsinites—he loves the Green Bay Packers.

“I became interested in the Packers because of their green and gold colors,” Cavalcanti says, which happen to be the colors on the flag of Brazil. He says another appealing thing is the Packers are owned by shareholders.

“It’s romantic notion,” Cavalcanti says. “That’s the way it works in Brazil. We like to think our teams belong to us.”

Cavalcanti is the percussionist and vocalist in the group Casuarina, performing at Brookfield’s Sharon Lynne Wilson Center for the Arts on Saturday, as part of a touring show, “On The Road,” organized by globalFest, a non-profit organization serving the world music community since 2003. The Wilson Center has dubbed the world music show as the “Creole Carnival.”

The tour hit the road at the end of February and will continue on through April. “There are twelve of us on one bus,” Cavalcanti says. “That can be challenging at times.”

Cavalcanti says he had some misconceptions about this country before he arrived. He believed all of the United States was like New York and Los Angeles. But the tour has opened his eyes.

“When we play at these college towns we get a chance to connect with all kinds of American people,” Cavalcanti says. “We feel each other out. They’re trying to figure out what we’re about and we are looking for a standard behavior from Americans.”

Cavalcanti makes his home in Rio De Janeiro, a city of more than six million people.

“The people we‘ve met in the United States have been very honest,” he says. “In the big cities in Brazil, people tend to wear masks and they aren’t always as they seem. In the country and suburbs people are more honest. No masks at all.”

Cavalcanti’s music has been influenced greatly by Dorival Caymmi, a Brazilian singer and songwriter who died in 2008. The New York Times said Caymmi was perhaps second only to Antonio Carlos Jobim in establishing a songbook of 20th century Brazilian identity.

Caymmi worked extensively with Brazilian star Carmen Miranda. With the bananas in her headdress, Carmen was tagged as a Brazilian stereotype, but she was immensely talented. Cavalcanti says Caymmi created the trademark look that Miranda delivered with her eyes.

“Almost every Brazilian singer, songwriter, guitar player was influenced by Caymmi,” Cavalcanti says. “We play a lot of his songs in tribute.” Caymmi is recognized as a pillar of the Bossa Nova sound.

“We wouldn’t exist without him,” Cavalcanti says. “Caymmi’s songs are very colloquial and people can understand the lyrics. That way they felt a part of his music. That’s what we try to do.”

From a technical standpoint, the U.S. tour has been wonderful.

“The venues we’ve performed in are top notch.” Cavalcanti says. “The technical crews, equipment are superb. That makes our job so much easier once we take the stage. You’d be surprised how much you can take on stage with you if you have problems. It comes out in the music, there’s no way around it.” 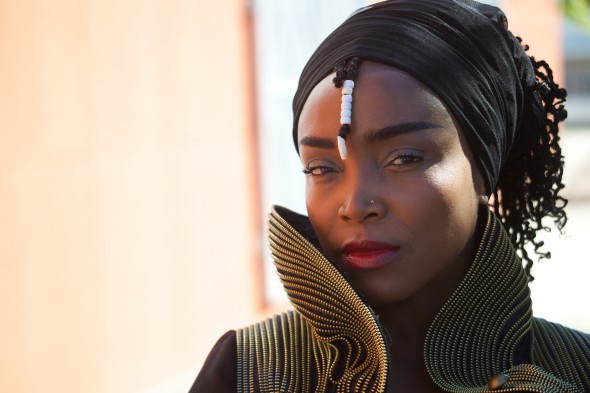 In addition to Casuarina, the evening includes a performance by Emeline Michel, the reigning queen of Haitian song. Photo by Gregory Reed.

Cavalcanti, now in his 30s, started playing music later than you’d expect. He was not a child prodigy. “I started playing the Tan Tan when I was 18 years old. I was studying to be a journalist but my father is a musician so I guess it was my destiny.”

His musical chops come to him honestly. His father is Lenine, a singer and songwriter from Recife, Pernambuco. In 2005, Lenine won two Latin Grammy Awards including best Brazilian song.

Cavalcanti’s instrument, the relatively unknown Tan Tan, is a drum commonly held in the musician’s arms.

“I tap the head with one hand and the side of the drum with the other,” Cavalcanti says. “You get a very low-end sound, a thumping sound from the head. On the side, which is made of leather, you get more of a slapping sound.”

He still thinks fondly about a possible career in journalism, but to him, writing is writing and a connection between genres is always present.

“In my songs there are often elements of what is going on in the world at that time, not that different from a news article. It’s sometimes better to listen to a song written during a certain time than the newspaper. A song can be more honest.”

Casuarina’s sound is based in Samba, arguably one of the most significant cultural elements in his country, almost the sound of Brazil. Samba is rich in accents and flirts with pop and urban music.

Casuarina was created 12 years ago in Lapa, a gritty bohemian neighborhood outside of Rio. “We often sing in Portuguese so it’s hard for our (English) audience to understand. But we try to put emotion into our songs so people can feel the lyrics and better understand the meanings.”

Cavalcanti says when musicians live in such close proximity, in this case a bus when they travel, they invariably learn from each other.  “We learn a lot from each other, no doubt. Not only on stage, but backstage as well. Sometimes we learn more backstage.”

So, what artists influenced a guy who plays Samba for a living? Again, not what you might expect.

“I’ve always been a huge Stevie Wonder fan,” Cavalcanti says. “His harmonies are amazing, he’s like a genius. I saw his show a couple of years ago and was astonished.” 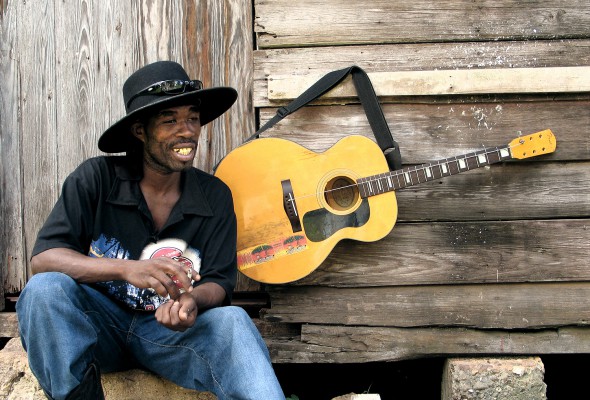 Brushy One String. Photo courtesy of the Sharon Lynne Wilson Center for the Arts.

But respect and love for American artists doesn’t stop there. Cavalcanti is also a fan of funk giants Parliament and Rick James. He also loves the British band The Police. “I’ve always loved Sting’s lyrics and learned English by listening to his songs

The “On The Road” tour has or will play SXSW, Bonnaroo and the Lincoln Center.

The Wilson Center audience can expect a no-holds barred soiree where magic and religious fervor intersect. In addition to Casuarina, the evening includes a performance by Emeline Michel, the reigning queen of Haitian song. Michel mixes Haitian rhythms and acoustic jazz and inspirational messages.

Also performing on Saturday, Brushy One String, a virtuoso performer from Jamaica who plays —you guessed it— a one stringed guitar.

“Brushy is amazing,” Cavalcanti says. “This guy knows what to do with his voice, changes it so much. He’s Jamaican and a good guy to talk with. Brushy has real street smarts. He didn’t study music and picked it up empirically. He sings beautifully.”