By Wyatt Massey, Milwaukee Neighborhood News Service - Feb 23rd, 2016 10:31 am
Get a daily rundown of the top stories on Urban Milwaukee 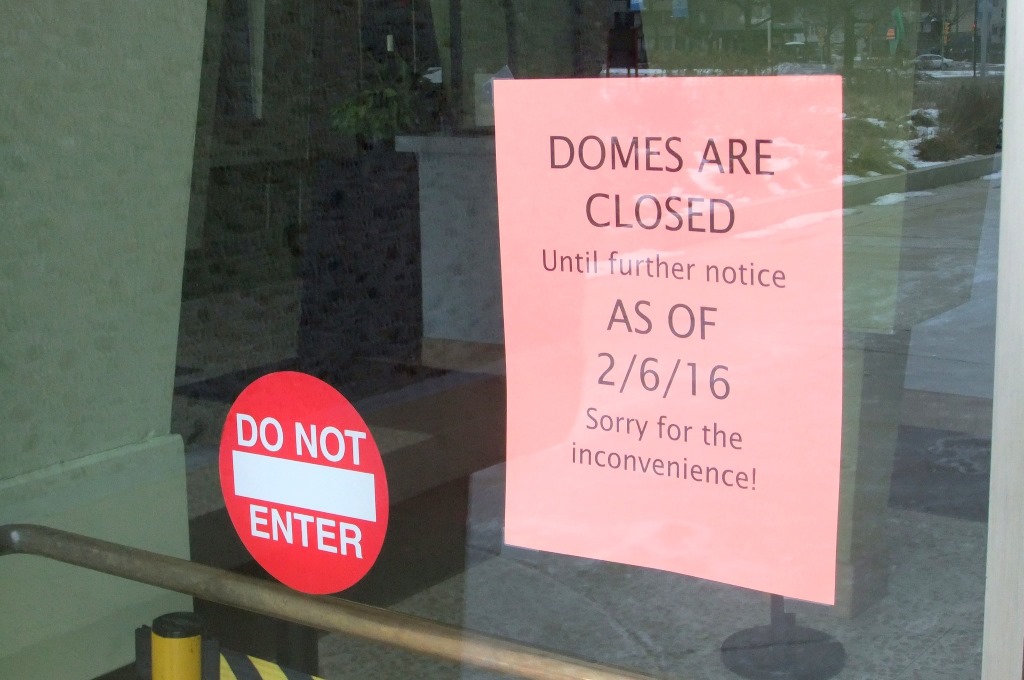 The Mitchell Park Domes are closed indefinitely due to structural concerns. Photo by Wyatt Massey.

Elmo Wendorf of Koepke Family Farms sits behind his table at the Milwaukee County Winter Farmers’ Market, a variety of cheeses for sale in front of him. Beside the container of toothpicks and the free samples of cracked bell pepper cheese sits an informational flier asking customers to voice their support for the Mitchell Park Conservatory.

Wendorf first visited the Domes at Mitchell Park when the facility was completed in 1967 and has returned to the park as a vendor for more than four years. The Oconomowoc native said he was sad to learn that the future of the Domes is uncertain. Officials closed the facility indefinitely on Feb. 6 after a piece of dislodged concrete was discovered on Jan. 25.

According to Darlene Winter, director of volunteers at the farmers’ market, the Domes closure has not affected the market. However, residents, visitors and local businesses are concerned that the closure could have a negative impact on the community.

The conservatory houses a variety of plant life in the three domes — desert, tropical and floral — and is a top destination for visitors in Milwaukee. Yet, the Domes have fallen into disrepair due to an aging structure, high maintenance expenses and nearly a decade operating at a deficit. 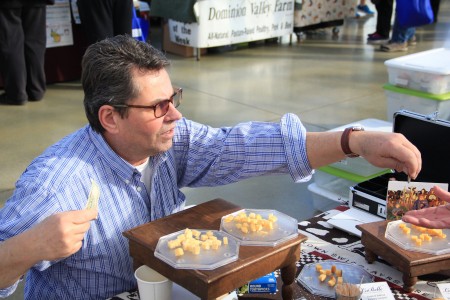 Elmo Wendorf, a long-time vendor at the Milwaukee County Winter Farmers’ Market, said the Mitchell Park Domes is a city landmark that should be reopened. Photo by Wyatt Massey.

Joanne and Ron Soyk, who have lived on the city’s northwest side for 25 years, often take visitors to the Domes because of the unique experience. “I hope it’s repaired,” Ron Soyk said. “It’s a valuable resource to Milwaukee.”

As of last August, the Domes were on pace to welcome more than 238,000 visitors, the highest total in the last four years. Yet, increases in attendance have been unable to offset growing annual expenses.

The Domes posted a net loss of at least $600,000 every year between 2006 and 2014, according to records obtained from the Milwaukee County Parks department. During that period, expenses totaled $14.8 million, while total revenue was $6.6 million. “We have been putting a lot of money into repairs,” said Melissa Baldauff, communications director at the Milwaukee County Executive’s Office.

The Domes offer visitors a change of pace from months of freezing temperatures. The venue also provides an opportunity for couples to host a tropical wedding for a fraction of the cost. As a result of the closure, some scheduled weddings will move to the Domes lobby and greenhouse, and some couples are looking at alternate locations, according to the Milwaukee County website.

Gloria De Angelo, owner of Gloria’s Cake Shop & Café, said that without the conservatory to bring visitors to Clarke Square, the surrounding neighborhood will suffer. De Angelo sells cookies in the Domes’ gift shop and she said Domes visitors frequently stop by the bakery, at 2531 W. National Ave., which opened less than a year ago.

Prince of Peace School, 1114 S. 25th St., typically sends several classes to the Domes each year to learn about plant life cycles and expose students to a variety of plant life not found in Wisconsin, said principal Patti Blaszczyk. “We’ll certainly have to look elsewhere to go on that field trip,” Blaszczyk said. “It was so nice that we could go at any time of the year.”

Michele Bria, CEO of Journey House, said she is disappointed that the Domes are closed, but that her organization will continue to keep Mitchell Park active and vibrant, regardless of whether the Domes are open. Journey House uses the park for youth athletics, such as its football program.

County officials have approached Journey House and other local organizations to begin a conversation about what is next for the conservatory. De Angelo said employees of the bakery would do what they can to help reopen the Domes. “If they want to fundraise, we will help.”

The nonprofit Friends of the Domes started a GoFundMe crowd-funding campaign to reopen the facility. The 1,600-member organization expressed strong support for reopening the Domes, said Sally Sullivan, Friends of the Domes business manager. As of Feb. 20, the group had raised nearly $4,000 toward its fundraising goal of $100,000.

According to Sullivan, the facility could reopen after structural repairs of less than $1 million. Estimates for rebuilding the Domes start at $75 million, Baldauff said. Park officials have been aware of structural concerns since at least 1994, when the county conducted a study of the structure. “There’s really nothing new going on here that wasn’t already known or wasn’t being handled,” Sullivan said.

The Parks Department requested $500,000 in 2015 to install netting for falling debris in the tropical dome and to develop a long-term plan. Sections of concrete fell in 2008 and again in 2015, both of which prompted structural reviews and led parks officials to believe that the tropical dome had the most pressing concerns. “Before we were actually able to spend the money on the netting, the piece of concrete was found in the arid dome,” Baldauff said.

The money will now be used to install netting in all three domes, a short-term solution to safely reopen the facility as soon as possible, Baldauff said.

The County Board is hosting a forum on the future of the Domes at 6 p.m. on Feb. 24 in the Conservatory Annex beside the Domes.