Phase one of 450-unit, four-buiding complex that will revive Cream City brick exteriors. 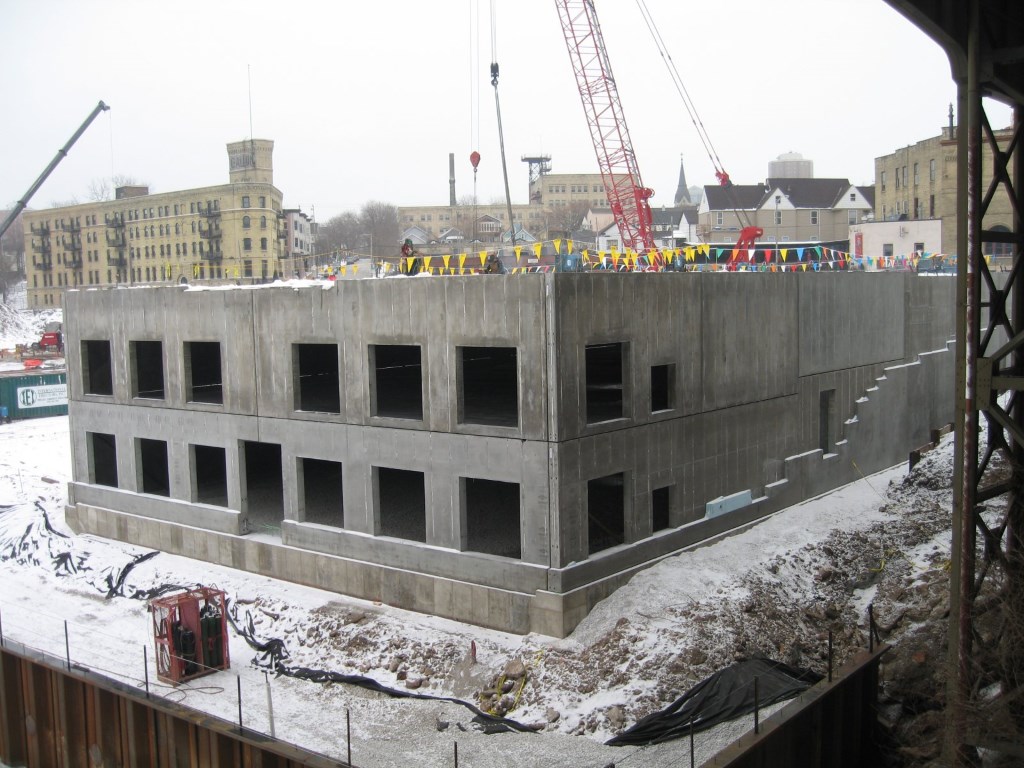 Construction is underway on the River House apartment complex. Photo by Michael Horne.

The River House apartments complex, developed and financed by Atlantic Realty Partners of Atlanta, is rising on the Milwaukee River site of the former Gallun Tannery, 1775-1881 N. Water St. It is scheduled for completion in December 2016, and for occupancy early next year. The 450-unit, $47 million market-rate project, will include four u-shaped apartment buildings, and phase one, two buildings including 243 units, is now under construction. The project is supervised by Greenfire Management Services, LLC. according to the plans and specifications of architect Jim Shields of HGA Architects. It was first discussed at a neighborhood meeting reported in Urban Milwaukee in February 2015. [See Michael Horne:”Rebuilding a World of Cream City Brick.”

This project is among many in the area: Some 740 apartments  are currently under construction at the western end of Brady Street, as my colleague Dave Reid reported in February 2015. [“Huge Growth for Brady and Water”.]

On election day on a cloudy February afternoon, crews were busy installing prefabricated panels on the building’s southern end, starting at the river and working east and north. Already two stories of a parking garage have risen to a point where they are the height of the Marsupial Bridge, suspended beneath the Edward D. Holton Viaduct which traverses the river here. Soon southbound travelers on N. Water St., and drinkers at the Red Lion and Trocadero, will lose their panoramic view of the magnificent 1925 viaduct framing Lakefront Brewery on the opposite shore. The buildings here will block the vista that was first revealed only in 2011 when the 120-year old tannery complex was demolished. Our ever-changing city.

The building panels are manufactured in Waukesha by Spancrete, a family owned company founded in that city in 1946. The extruded concrete panels assemble very quickly, as we will see over the next few weeks. A giant red crane from All Crane Rental picks the panels off the back of a flatbed trailer truck, while a ground crew and one member on a Lull lift then guide it into its place next to the previous panel. Fittings to secure the panels are welded into place in the time it takes for the next truck to back into place. Meanwhile, 100 feet upstream on the site, at a point across from the Edge Condominiums, a yellow hydraulic crane lifts forms for the building’s pad foundation while a red-and-white striped concrete mixing truck from Ozinga waits to discharge its load as the second building of the four building complex begins to also rise. 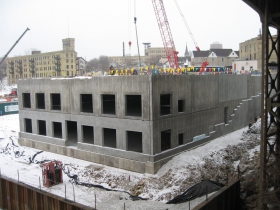 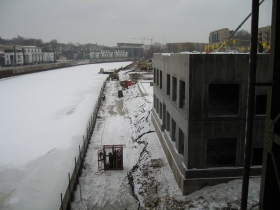 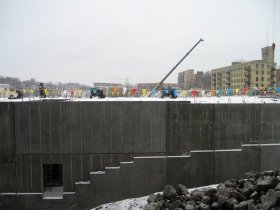 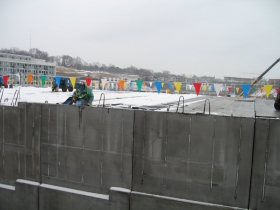 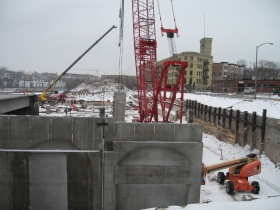 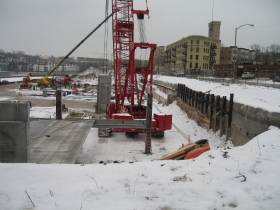