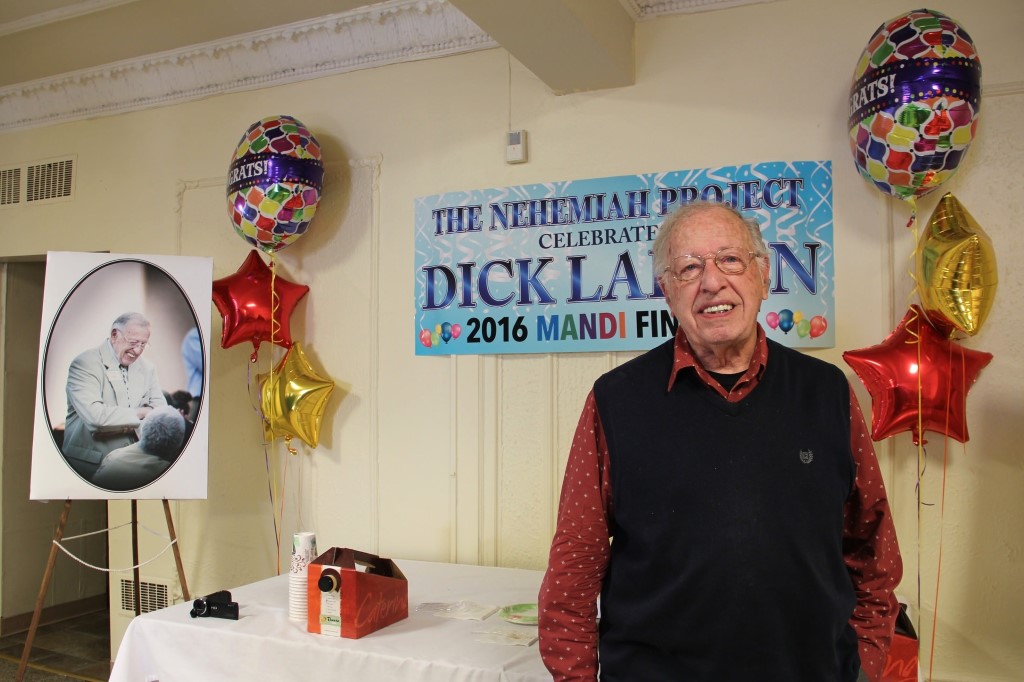 A week after Larsen retired at 62, his daughter died and left her 2-year-old daughter, Kalista, in the care of Larsen and his wife, Elaine. At the time, Larsen had been on the board of the Coalition for Children, Youth & Families(formerly Adoption Resources of Wisconsin) for a year.

Adopting Kalista strengthened his connection to the coalition’s mission. Former Executive Director Colleen Ellingson said Larsen often talked about why raising Kalista and investing in her growth was so important. “He could speak about the experience very movingly to board members,” she said.

With an extensive network from years of experience with nonprofits before retirement, Larsen worked closely with Ellingson to recruit directors who could transform the board from parent-led to more professional.

“What I brought to the board was an extension of her vision of what the organization could be,” Larsen said. He still serves on the Coalition for Children, Youth & Families board as secretary. 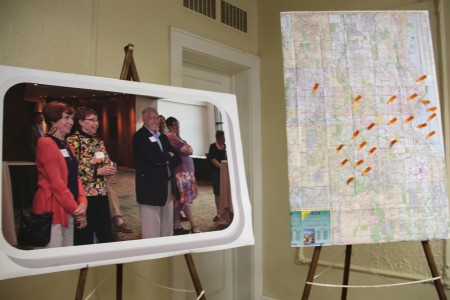 A map of Milwaukee highlights the location of nonprofits Dick Larsen has served. Photo by Sophia Boyd.

In 1969, Larsen started a technical sales company, Larsen Electronics. He said he loved being a business owner but that retirement has been so much more rewarding.

“There’s something very different about board members who have been entrepreneurial themselves,” Ellingson noted. “That’s really helpful when you’re looking at strategic planning for the future.”

Larsen grew up in Milwaukee during the Great Depression with his Norwegian mother and Danish father who struggled to afford daily necessities. Nevertheless, they insisted on an education for Larsen.

“The one thing I wanted to do at that time in my life was be a baseball player… and I was pretty good at it,” Larsen said.

When Larsen was 17 years old, the Pittsburgh Pirates offered him a contract as a pitcher. But his dad would not sign the contract until Larsen had finished his education. Larsen said he struggled to see a future for himself and dropped out of school for some time.

Eventually, he came to terms with his dad’s decision and continued his education in engineering.

“I came to the conclusion a long time ago when I was quite young that if I ever was in the position and … capability to help people get over this kind of situation (of no hope) that I was going to do it,” he said.

The Nehemiah Project Inc., 2506 W. Vliet St., provided Larsen with an opportunity to give back. The nonprofit organization focuses on the emotional and physical health of youth. In 2008, Larsen founded the Seeds of Growth Employment Program, which gives previously incarcerated young boys he experience needed to maintain a job. The boys are responsible for painting and selling gardening stones. The program also teaches them how to manage their money.

“They are not afforded the opportunities that many other kids in this community are,” said MaryeBeth Dugan, executive director of Nehemiah Project. “Some of those include the simple act of going to work or knowing people in your family who work.”

Dugan added that Larsen was instrumental in implementing the program, from creating a business model to finding grants.

Devonte Evans, 17, participated in Seeds of Growth after he served a year and a half in a juvenile detention center for armed robbery at 16. He said he liked everything about the program, from the staff to the job training.

The staff helped Evans prepare a resume and taught him interview skills, such as proper attire, body language and how to answer questions.

“They showed me another side of life,” he said. “The staff that was doing the program was very helpful and they were taking their time with us.”

Joe Kresl, who is on the Nehemiah Project board and a family friend of Larsen, said that he got involved with the nonprofit and Seeds of Growth because of his long-time friendship with Larsen. “He’s a wonderful, quiet but engaging man,” Kresl said.

“We really gave (the boys) some hope for the future,” he added.

Larsen prides himself on being a matchmaker for nonprofits. He said matchmaking is “ideal for me because I learn about all of these other organizations and what they’re doing, what they can bring to the party.”

Now vice president of the Nehemiah Project board, Larsen connected Sister Edna Lonergan, founder and president of St. Ann’s Center for Intergenerational Care, to the project. The Lena Sommers Youth & Literacy Center is moving from Nehemiah to St. Ann’s.

Larsen encourages other retired people to use their talents to serve their community. His next project is to start a national nonprofit called Boomer Community Service to match the skills of retired people with the needs of nonprofits.

“Age should not be a deterrent to contributing,” he said.

Larsen has also served on the board of the Rotary Club of Milwaukee and the International Forgiveness Institute. He volunteers with ACTS Housing and St. Hyacinth’s Food Pantry.