By Sophia Boyd, Milwaukee Neighborhood News Service - Feb 4th, 2016 10:40 am
Get a daily rundown of the top stories on Urban Milwaukee 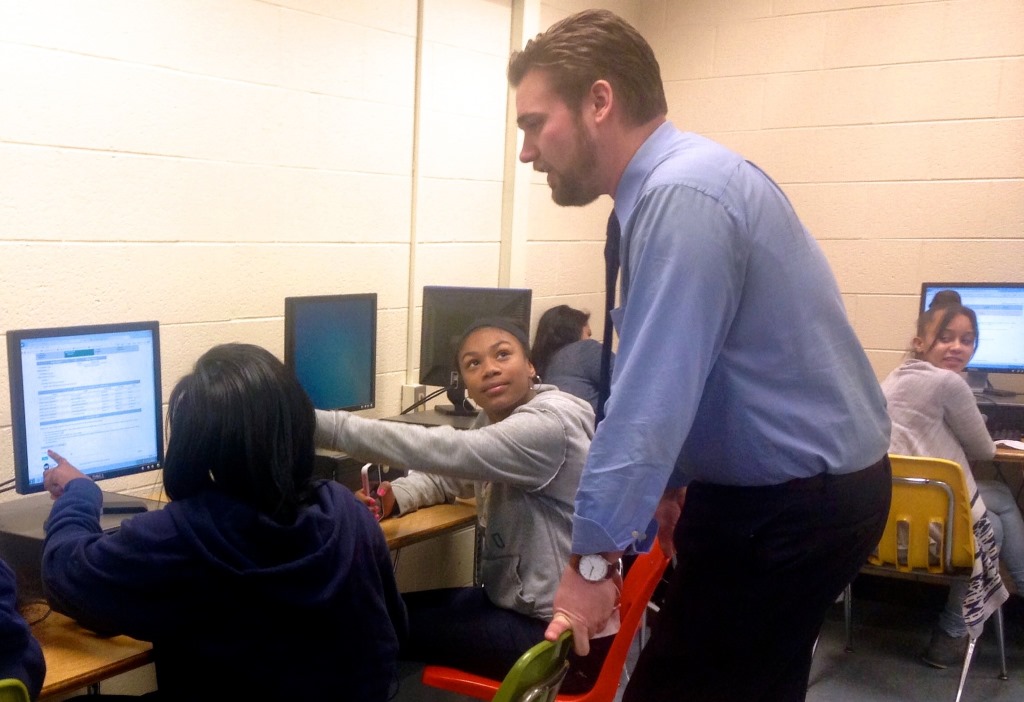 Students at South Division High School, 1515 W. Lapham Blvd., are diving into the world of health sciences, thanks to the Academy of Health Sciences.

The academy is one of five options the National Academy Foundation (NAF) offers to prepare students for careers in a variety of fields. NAF curricula are created in partnership with industry professionals and are designed to help students acquire workplace skills.

Health sciences is the fastest growing field in Milwaukee, according to NAF Counselor Ana Baez, who added that it also hires the most people. “The people providing those services should be representing the diverse population in Milwaukee,” she said

South Division is the largest bilingual high school in Wisconsin. There are 22 countries represented and students speak 62 different languages.

Academy of Health Sciences Director Molly Schuld said 55 freshmen are enrolled in the program and can graduate with NAFTrack Certification, which signifies that the students have the skills necessary for a career in health sciences. To be certified, students must complete an internship in high school and pass four one-semester classes out of the five NAF health science classes that are required.

“Our next step is … connecting with people and getting internship experiences for our students,” Schuld said. She noted that the goal is to have internship opportunities set up by the summer of 2017.

Sophomores, juniors and seniors are allowed to take classes in the Academy of Health Sciences curriculum and participate in opportunities offered to all NAF students at South Division, such as a field trip to the International Museum of Surgical Science in Chicago.

“I think that the structure of NAF … is really beneficial to students who normally would be considered disadvantaged (like) a lot of the students at South Division High School,” Schuld said. “It’s advantageous to them in the sense that it focuses them on specific skills.”

The first health sciences class freshmen take is Health Careers Exploration, where they learn about the different professions in the field. Other courses offered include global health, principles of biomedical sciences, human body systems, medical interventions and medical terminology.

“I want them to know not just what they want to do but what they have to do in order to get there,” said Joe Warnacut, who teaches freshman classes at the academy.

Jordan Williams, 15, said he appreciates the guest speakers such as professionals and medical students who come to the classes. Classmate Aliyah Williams, 16, said she wanted to know more about nursing, and has learned about the education she needs to become a nurse and the team environment she would work in.

Most of the students’ projects are group-focused. For their final project last semester, students simulated working at a hospital. Warnacut said each group chose a disease to focus on, such as HIV, diabetes, breast cancer or depression. “They had to come up with a health care team, based on all the professionals we talked about … that could help somebody with that disease,” he said.

One 14-year-old freshman said she took particular interest in the mental health unit, since she was diagnosed with depression, bipolar disorder and other mental illnesses. She said the program has helped her personally by introducing her to new medicines and treatments to alleviate her symptoms.

Since South Division does not have a feeder school, academy staff members said it was challenging to recruit students for the program. Most of the current participants were enrolled during freshman orientation. The team is planning to offer a health sciences summer camp to enhance recruitment. Schuld said she hopes to eventually graduate 70 students per year with NAFTrack Certification.