Emergency management staff say they may not be allowed to mention climate change.

The National Resources Defense Council is taking an in-depth look at the four U.S. jurisdictions who are required to update their State Hazard Mitigation Plans in 2016 to account for the projected effects of climate change. Recently we looked at Maryland, which we expect to develop one of the year’s strongest plans. Today we’re checking out what’s going on in Wisconsin. Can we expect good things from the Badger State, too? 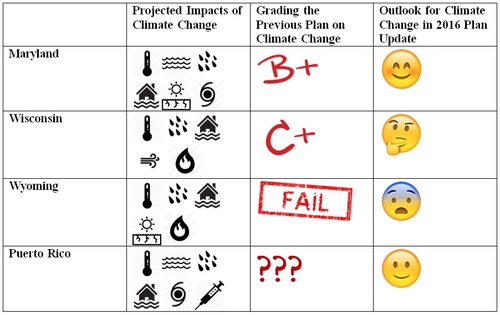 Projected changes in the frequency of hot days and heavy rain events, from 1980 to 2090, under a medium emissions scenario. If future emissions are higher than this scenario projects, the changes will be more extreme. Image credit: WICCI.

NEEDS WORK: Wisconsin’s 2011 plan contains a short stand-alone section on climate change; it is not integrated into the risk assessments for other hazards, and it doesn’t appear to have any obvious relationship to the mitigation strategies. In the stand-alone section, the plan acknowledges that climate change is occurring but states that “the future is uncertain, with varying models predicting a range of outcomes.” The plan alleges that it is unknown how much the climate will change and at what speed it will change. Instead of using the available data and projections, the 2011 plan defers analysis until “further research is performed” and “better models can be created and understood.” It promises to include new data in the 2016 plan update.

GRADE: C+. This approach, while recognizing that climate change needs to be considered, is clearly inadequate to account for projected future changes to disaster risk, many of which are already well understood. The 2016 plan should take a comprehensive look at how climate change will affect the future risk of each natural hazard experienced in Wisconsin. Numerous studies are available now that provide actionable information. We hope that NRDC can help Wisconsin identify resources that will inform the new plan.

How much money is at stake?

Over the last 20 years, Wisconsin has received over $110 million through FEMA’s hazard mitigation grant programs – funding that was contingent upon the state having an approved hazard mitigation plan. These funds have been used for projects like floodproofing homes, relocating structures out of the floodplain, building safe rooms, and retrofitting buildings to make them more wind-resistant.

What can we expect from Wisconsin in the 2016 plan?

Like Maryland, Wisconsin has been proactive about climate adaptation planning; WICCI (a partnership including the state’s Department of Natural Resources) released a comprehensive state adaptation plan in February 2011. However, this plan is just a critical first step, and changes in state government since 2011 appear to have slowed the state’s progress on implementation.

Wisconsin’s governor, Scott Walker, was called the “most dangerous” candidate on climate change before he dropped out of the presidential primary race. He has resisted the implementation of President Barack Obama‘s Clean Power Plan. He eliminated a third of DNR’s scientist positions, and he has taken many other steps to reduce the ability of state agency staff to address or even discuss climate change.

Staff at Wisconsin Emergency Management (WEM) have indicated that the 2016 hazard mitigation plan will include a discussion about how climate change impacts the state’s identified hazards. However, some individuals have privately expressed concern that they will not be permitted to do a full climate assessment or even mention climate change explicitly.

In conclusion, it’s promising that Wisconsin’s 2011 plan has already acknowledged that climate change needs to be addressed. The 2016 update is a great opportunity to take the necessary next step to gather information and integrate it into the plan’s assessments and strategies so that Wisconsin can be better prepared for what the future holds. Governor Walker should let the plan update incorporate the best available climate science without intervening for political reasons.

A version of this story originally appeared on NRDC’s Switchboard.