Port Of Milwaukee Has Flurry of Final Traffic

Great Lakes traffic up as ships rush to finish before St. Lawrence Seaway closes for winter. 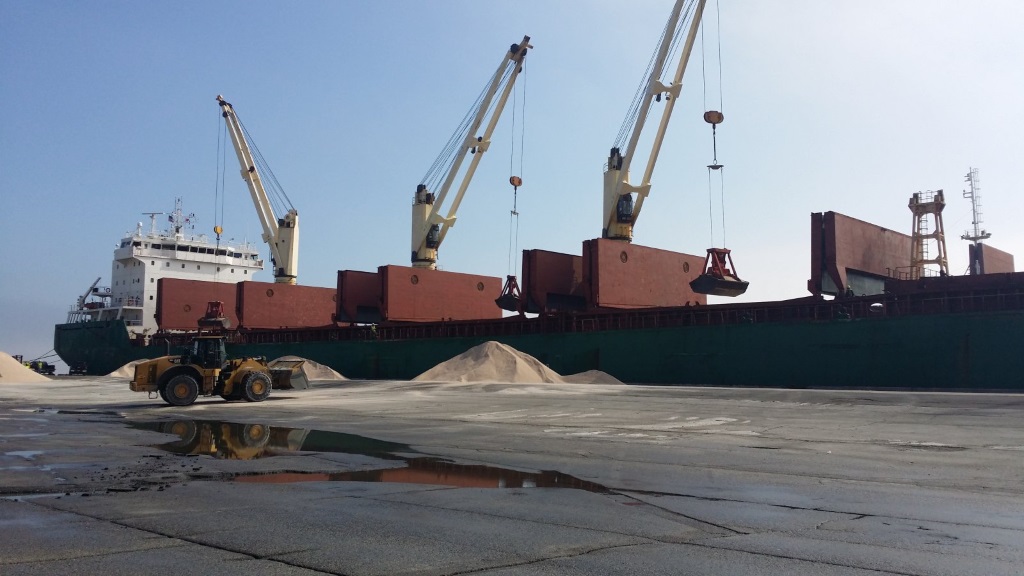 Salt from Morocco being unloaded, October 2014. Photo by Peter Hirthe.

As the St. Lawrence Seaway prepares to shut its gates for the winter on December 30, the traffic of ships on the Great Lakes has reached an unusual crescendo. This includes the Port of Milwaukee, which has had a busy December of ocean-going vessel visits. Just last week, the bulk carrier Isolda made its way to Milwaukee from Morocco, making stops in Germany and in the Netherlands along the way.  On the same day of its arrival (December 12), another ocean-going bulk carrier called the Puffin arrived, after sailing from Ireland to Ontario.

“The Port of Milwaukee has really proven its value to our regional manufacturers with an increase in large-scale movements of machinery for both export and import,” said Milwaukee’s Port Director, Paul Vornholt. “We have had another strong year for steel moving through the port, which is used by local manufacturers. And a number of vessels arrived through the Seaway bringing in barley to support our city’s brewers.”

The Ottawa-based Chamber of Marine Commerce (CMC) attributes the intensive scramble of ships on the Great Lakes to a final rush in grain exports, as well as to an increase in deliveries of manufacturing parts. CMC president Stephen Brooks says, “Ships are delivering cement, gypsum, aluminum and machinery to support an eight-year high in U.S. construction spending, along with growth in the automotive sector in Great Lakes states. But steep declines in global consumption and pricing have largely halted coal and iron ore exports via the waterway this season.”

New business has helped to offset shortfalls, the CMC reports, with figures from April 2 to November 30 showing the St. Lawrence Seaway attracted 1.7 million metric tons of cargo either coming from new origins or heading to new destinations. This included salt imports from Morocco, Egypt and Venezuela to the ports of Toledo, Milwaukee and Monroe.

Domestic general cargo via the Seaway saw an increase of 27.7 percent this season, the organization reports, due mainly to increased shipments of aluminum ingots traveling from Sept-Iles, Quebec to ports in the U.S., while movements of large-scale machinery and cargo like wind turbines nearly doubled this season, up 92 percent.

Domestic lakers can continue hauling cargo into the winter, at least until the ice cover makes it too difficult for them to travel. But if ocean-going vessels, or “salties,” hope to escape the Great Lakes winter, they must pass through the final lock outside of Montreal by December 30. Wayne Johnson, the Harbor Master at the Port of Milwaukee says, “It’s the end of the season, so all the ships are rushing to get their products out.”

For all salties, the deadline looms large, but for ships caught in legal trouble, it can be even more daunting. In a shipping channel outside of Duluth, a German-operated ship sailing under the Liberian flag has been held by the U.S. Coast Guard since early November, with no word yet about whether it will be allowed to leave. According to the Duluth News Tribune, the bulk carrier Cornelia was chartered to deliver grain to a flour mill abroad, but is being investigated for violations related to the discharge of oily water.

At the Port of Milwaukee, goods shipped through the port reflect the local economic landscape. Port spokesman Jeff Fleming explains, “The oceangoing ships bring in raw material – steel for manufacturing, barley for brewing, etc.—and take out finished products. So, for example, a West Allis company called A-C Equipment received steel through the port, manufactured a giant rotary kiln for cement production, then shipped the finished product via the Seaway to a new cement plant in Quebec.”

Since the WE Energies Valley Power Plant committed to switching its power source from coal to natural gas, coal imports at the Port of Milwaukee have plummeted to 4,000 tons so far this year (compared to 800,000 tons in 2013). Exports of mining shovel parts from Caterpillar and Joy Global are also down due to a slowdown in the mining industry.

With the Seaway season soon to end, Vornholt notes, “we anticipate a strong finish for our overall cargo numbers as ships bring in more steel.”

The port will also host several enormous lakers for winter mooring, which Vornholt calls “the port’s B&B operation.” He says, “They dock here, hook up to our power, and work on their ships… When you see these lakers, they’re the really big ones that service the iron ore in Duluth. We don’t usually get cargos from ships that size, but when they park in the mooring basin, it is amazing.”