The 89-year-old sang 26 songs, with less energy perhaps, but still with impeccable phrasing. 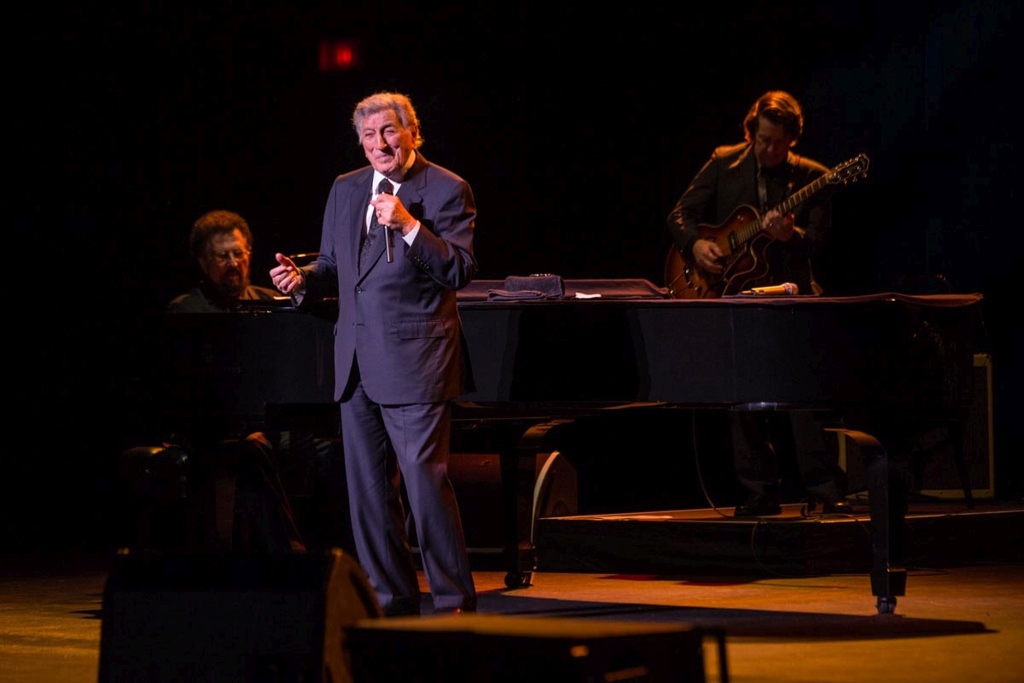 To be honest, it felt great being one of the youngest people in the audience. While I’m no spring chicken, let’s just say I was the only person who got carded at the bar during the Tony Bennett show at the Riverside on Friday night.

Walking into the lobby you got the feeling many of these folks had seen Tony perform before, perhaps many times. It was a mature crowd that probably just came from a nice dinner to share an evening with someone they grew up with. Perhaps they danced to his dulcet voice at their first high school dance.

At 89, Bennett still delivers a performance that transports you to another dimension. Flies you to the moon, so to speak. You can’t help but wonder about the particular place and time when his opening number, “Watch What Happens” was written and recorded. The answer, according to Google, was in 1964, for the French movie, Umbrellas of Cherbourg, with its first recording, by Bennett, in 1965. By then he’d been a star for more than 15 years.

From the moment Bennett hit the stage the audience cheered, cooed and applauded adoringly. Each time Bennett did a little 360-degree shuffle, the full house responded accordingly, lovingly. The audience clapped so often it almost became a chore and you felt like a jerk if you didn’t join in.

His voice is so distinctive, there’s nobody to compare it to. Bennett’s been called a singer’s singer, and praised by top artists like Sinatra, who famously called Bennett “the best singer in the business.” On Friday night his voice was amazing–but I hate to say it–for an 89-year old man. I’m sure that’s difficult for some Bennett fans to accept. It’s like a pitcher realizing his fastball isn’t what it used to be, or Tiger Woods accepting he will never really compete again on the tour. While it’s a bitter pill to swallow, it’s fact.

But not for a moment does that really take away from the night. When you go to see someone like Tony Bennett, you go for the man, the music, and the show. Paul McCartney is in his early 70s and still “brings it.” But you can’t really say he’s the same guy who toured with the Wings in the 70s.

One of the cool things about Bennett’s performance was the mood, the ambience. His backup jazz quartet was nothing less than stellar. Bennett introduced the drummer as Count Basie’s favorite and you could see why.

Their talent combined with Bennett’s stage presence made for an unforgettable experience. And that’s what it was, a great experience.  While Bennett isn’t the same guy he was 50 years ago (who is?) the show in its totality hasn’t lost a step—and that’s a minor miracle.

He delivered the hits; “Steppin’ Out With My Baby,” “The Way You Look Tonight,” “I Left My Heart in San Francisco” and “Rags to Riches,” his 1953 song that was later prominently featured in Martin Scorsese’s GoodFellas.

Even if you weren’t familiar with all the songs, it didn’t matter. Each took you to the same place in your imagination. Most would recognize “I Got Rhythm,” which seemed truncated. “Sing You Sinners”, which came out in 1956, still popped with every word Bennett emphasized 60 years after it debuted. Bennett is a master at delivering the meaning of every lyric, every phrase.

Bennett’s daughter Antonia opened the show for her father. She looked like a delicate doll in blue Taffeta. Antonia’s affection for her pops and admiration of his work was evident. She may not have gotten her gig if her father wasn’t the headliner, but she was solid and the audience really dug it when she returned for a touching duet with her father on “Old Friends.” They did a soft-shoe routine together and the audience seemed charmed.

The stage was warm with purple hues, comfortable as a New York lounge. You wouldn’t have been shocked if The Rat Pack took a table on the side of the stage and downed a few scotches while listening to this cat lay down a few of the classics.

Tony Bennett at the Riverside Theater 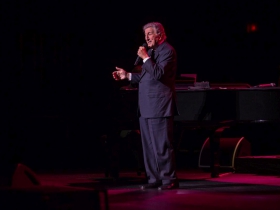 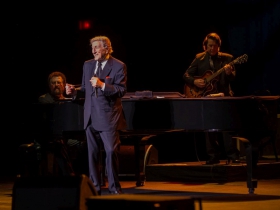 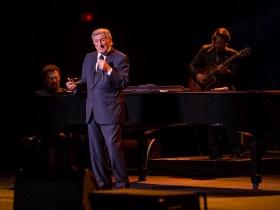 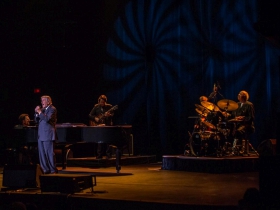 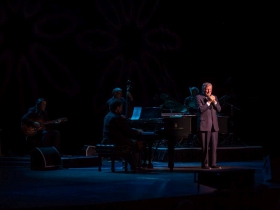 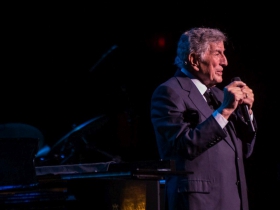