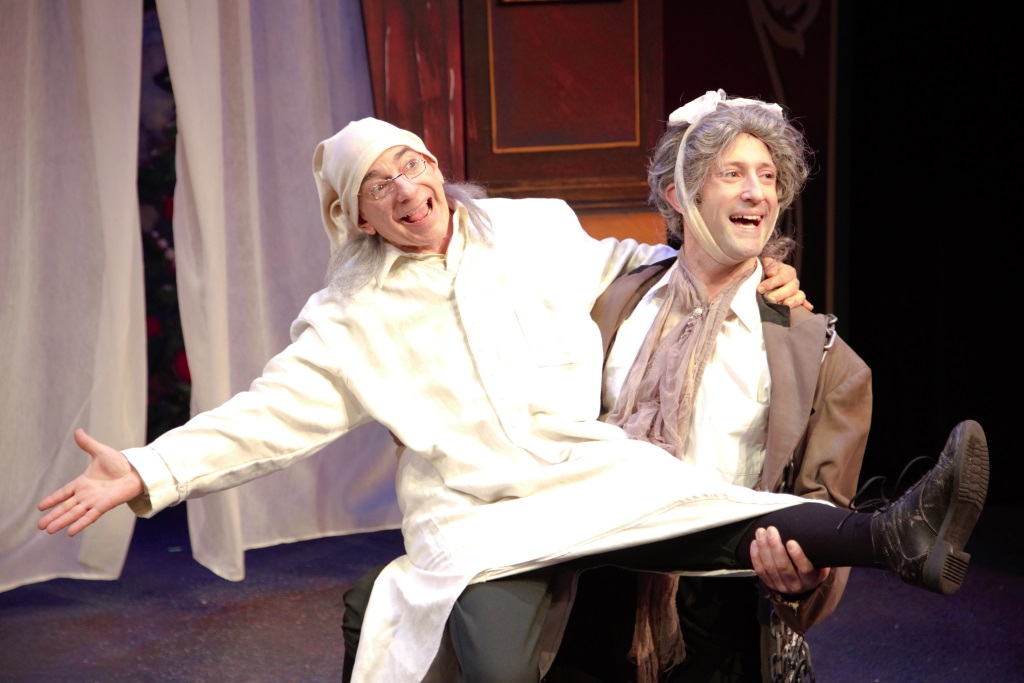 We tend to associate the holiday season with certain fictional stories. Like Charles Dickens’ A Christmas Carol. The tale of redemption, hope and forgiveness is ingrained within us, a part of our lives as much as Thanksgiving indigestion and returning unwanted holiday gifts.

Albert Finney played Ebenezer Scrooge in the 1970 musical Scrooge. Jim Carey voiced the same character a few years back and Alastair Sim donned Scrooge’s worn nightcap and tattered and dingy moo-moo before they were fashionable, in the 1951 film A Christmas Carol. Some may know the 1938 version, A Christmas Carol, starring Reginald Owen.

Well, forget all that. This season, husband and wife team and co-founders of Milwaukee’s In Tandem Theater Company, Chris and Jane Flieller, present Dickens’ story through a distorted lens, as the play’s title, A Twisted Carol, suggests.

The play runs about 90 minutes with an intermission and was written by Mondy Carter with a score written by Nathan Wesselowski. Chris Flieller will be portray the mean-spirited Scrooge and Jane directs the show.

On a scale of one to 10, with 10 being the most twisted, Chris Flieller rates the show a seven: “It’s clever.”  The Flieller’s are playing their cards close to their chest regarding how the twisted part manifests, so as not to spoil the surprises.

This play was originally written in the early 90s as a short one-act piece that ran about 40 minutes. In Tandem’s show will feature seven actors plus a piano player to accompany the songs.

The characters in Flieller’s show remain true to Dickens’ original story. In life, Jacob Marley was Scrooge’s business partner and in this production, Marley still ascribes to the premise that nobody does anything for nothing. Marley is still a selfish rotter, even though he’s dead.

“The story was easily adaptable,” Flieller says “It is  A Christmas Carol so we didn’t have to change anything. This show goes along with the idea of alternative holiday fare.” Meaning there are some detours from the original story.

“It’s a challenge to organize new material, make sense with it,” Jane Flieller says.  “In Dickens’ story, the Ghost of Christmas Past is represented as a kindly old gentlemanly figure. In our production the ghost is a boisterous, emotional, animated woman.”

Jane Flieller says she and her husband worked with Carter during the rewrites of the play. “Some things Monday wrote we found funny but felt it didn’t fit with our vision of the production,” Jane says. “We wanted to match things up with the tone and feel of the play. We play the characters straight and the comedy comes out of that. We let the audience do the heavy lifting, but it is a musical spoof.”

Rehearsals have been mostly good ones, she says. “I’m happier than I was last week. We’re still at the awkward stage and nothing is absolutely completed.”

Flieller says sometimes she feels like she’s never going to get it together. With an original production the stakes can be even higher. “It’s a new piece. You tend to worry more than an established play. I take a lot of notes.”

How does Chris Flieller feel about playing this iconic figure?

“Scrooge is a great role,” he says. “He’s kind of wicked and I get to sing.” What more could an actor ask?

Flieller has tons of experience as an actor but notes, “I don’t act in a lot of our (In Tandem) shows but will when called upon. I tend to reserve Christmas for myself. ”

Many may know In Tandem from their hugely successful A Cudahy Carol Christmas, which loaded up the local references and ran for many years. That show, like this one, grew out of a sketch show, Holiday Hell.

“That show helped us gain a following,” Chris Flieller says. “People like what we do during the holidays.”

In Tandem is celebrating their 18th season, a milestone any theater — or marriage — would be proud to reach.

“We know how lucky we are,” Jane Flieller says. “We’ve got a strong work ethic and like to surround ourselves with good people who know what they’re doing.”

As artists, it can be difficult to take on the rigors of running a theater. It can goes against the grain of the whole artistic spirit.

“We run a business but it’s a business we love. We like to bring joy to the people that come to our shows,” Jane Flieller says. “After almost every show someone tells me they’ve never been here before and how they just discovered us.”

A lot of folks look forward to hanging up their day job when they reach a certain age—not the Fliellers.

“We’re doing something we love,” Jane says. “If we retire from this, we’d end up doing this anyway, in one form or another.”

So, if you had enough of the traditional Christmas Carol, if you want a little twist in your Dickens martini, try In Tandem’s newest. It might just be their next holiday hit. 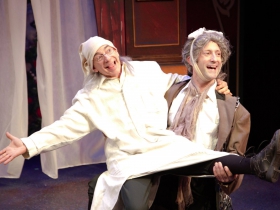 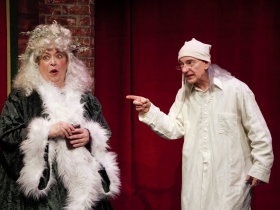 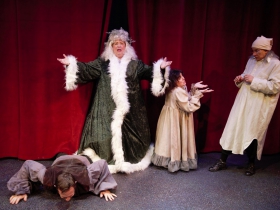