Murky policies can prevent open records for four to six weeks. Final story in a series. 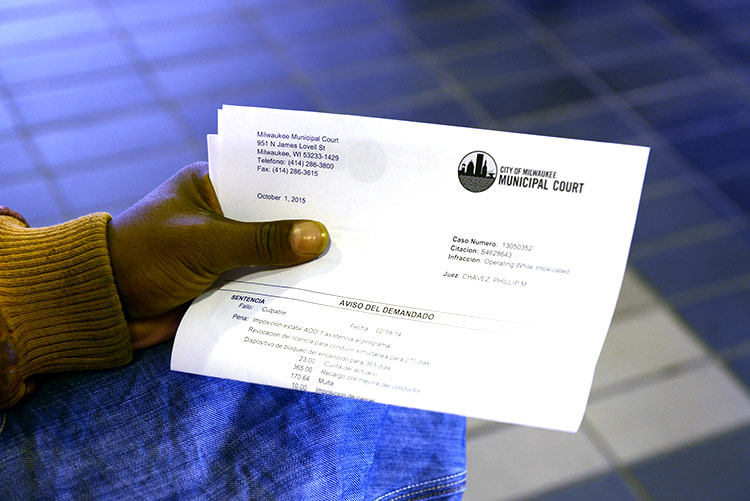 A defendant holds a document for his case as he waits for court to begin. Photo by Sue Vliet.

A woman wearing floral pants grabbed a knife from a drawer and threatened to slash the tires on a vehicle owned by her uncle, who eventually was able to take the weapon away from her, according to a Milwaukee Police call log on June 17.

The call log also showed the 20-year-old woman told authorities that her uncle slammed her on the floor and into the wall and held her chest.

Other than those two brief descriptions contained in the Milwaukee Police Department document, what actually went down on that sunny Tuesday afternoon in a nondescript two-story house on the North Side remains mostly unknown, despite numerous attempts to obtain more information about the incident, which resulted in at least one citation.

As part of its reporting about Milwaukee’s Municipal Court, Milwaukee Neighborhood News Service selected a random case to get a glimpse of how accessible court documents are to the public.

The search for information about this case provides just one example of the murkiness about who is allowed access to documents such as police reports and narratives typically associated with citations, as well as when these documents are available to the public and the defendant.

The search began in the waiting area of the Municipal Court building, 951 N. James Lovell St., where a clerk at the service window said municipal judges control whether information about particular cases are made public.

Another clerk later said only the defendant or his or her attorney would be able to obtain details of a case, including the narrative written by police. “If the person does not have the opportunity to defend himself in court, then it is not an open record,” said the clerk, who tersely refused to give her name.

However, according to Collin Johnson, a legal consultant with the Milwaukee Police Department, “that’s not how the law works.” He said access to citations, narratives and police reports is dictated by Wisconsin’s open records law.

“Big picture… every government document is an open record subject to both exceptions and what’s call the balancing test,” Johnson said. “So there is no blanket rule that says something can or cannot be released.”

Johnson added, “I think there was a miscommunication there… All of our clerks know very well that records are open to anyone.” He said that only in certain circumstances are records open only to the defendant.

Some 18 minutes after the woman wearing floral pants called 911, a “Family Trouble” entry appeared on the Milwaukee Police Department’s calls for service Web page along with the address, date and time of the incident.

Five days later, a Milwaukee police officer in District 5, where the incident took place, could only say that it “involved a knife” before he suggested asking the Milwaukee Police open records department about the case.

The officer said records regarding the case would be unavailable to the public until it goes to court and that a police narrative, which typically accompanies a citation, was unavailable at that time. The following day, a Milwaukee Police open records department clerk said the citation was unavailable.

“Do you know these people?” the open records clerk asked, to which the reporter said “no.”

The clerk said the citation would not be available to someone who did not know the people involved in the case. She did, however, give the reporter a one-and-a-half-page call log that contained the brief description of the incident and information about the people involved, including their names, phone numbers, addresses, genders and ages.

Johnson said that several factors may have made the citation unavailable — for example if the case involved a sensitive crime or if the record had not been reviewed by police supervisors. However, the relationship between the requestor and the defendant should have no bearing on whether the record is made available.

“Typically, as soon as (a citation) is written and is sent to the city attorney, it is available as public records for anyone,” Johnson said. “The public can make a request for a citation written against anyone … against me, against you, against anyone.”

On July 8, an NNS reporter made another call to District 5 to find out the status of the citation, and again, an officer said the best way to find out was through the department’s open records office. During a call on the same day to the open records office, an official was able to provide a call log number and the name of the officer who responded to the call, but said that it was unclear whether a report was written.

On July 13, a reporter placed a phone call to the officer who responded to the incident and left a message for him regarding the case. He did not return the call. The quest for more information about the incident ended in vain on Aug. 31 when the fourth search in six weeks on the court’s website rendered nothing.

Johnson said the effort to obtain information about the incident may have been hindered by the fact that all the requests were made verbally.  The law allows for public officials to deny verbal requests without any detail, while requiring them to give a written explanation for their denial if the request is made in writing, Johnson said.

During the Milwaukee Neighborhood News Service’s attempt to obtain the record, no one asked for a written request.

This citation and thousands like it written by the Milwaukee Police Department travel through a four- to six-week bureaucratic black hole where public access to detailed information about incidents associated with citations is limited.

After a citation is written, it is converted to an electronic case file and sent to the city attorney’s office, where it is reviewed, according to Kurt Behling, assistant city attorney with the City of Milwaukee. “We then approve them for filing,” he said. “Sometimes things need to be changed like (the officer) writes a trespassing ticket when it should be a loitering ticket.”

Before the city attorney has had a chance to determine probable cause, police records and narratives are typically not open records, Johnson said.
“Records subject to a pending investigation can be denied,” Johnson said. None of the clerks NNS approached to obtain records about the case said they were unavailable because of a pending investigation.

Devi Shastri contributed to this article.