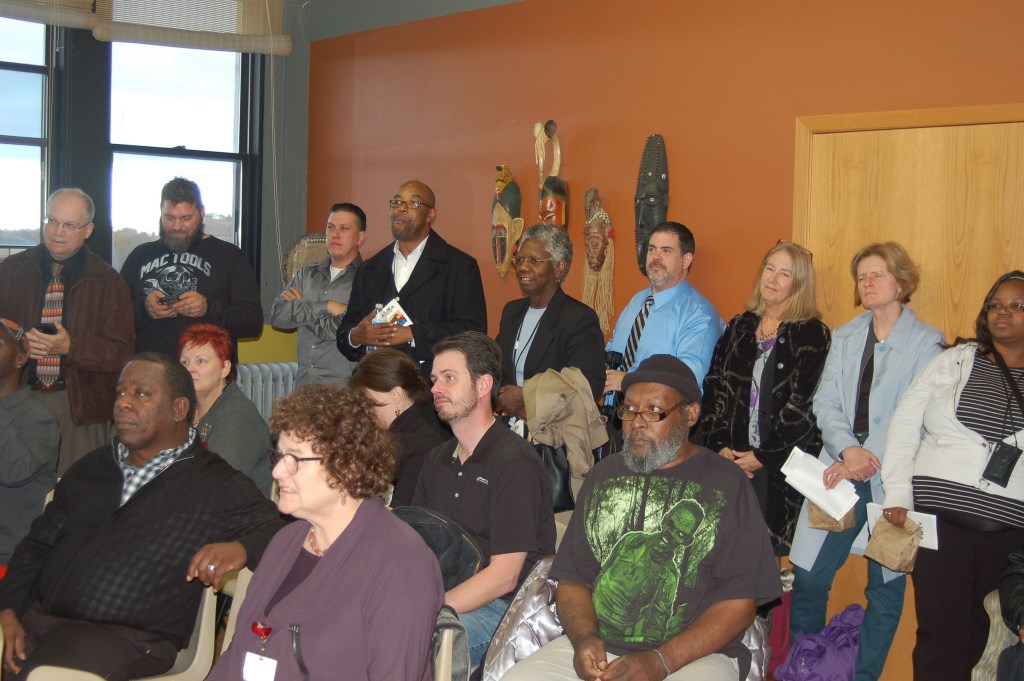 Staff, graduates, local dignitaries and friends of the Alma Center gathered recently for a formal presentation of a national award created to highlight local programs that can serve as models for ending domestic violence.

A panel of family violence experts selected Alma Center to receive the Celebrating Solutions Award for its innovative approach to healing abusive men and breaking the cycle of intergenerational violence. The award, which comes with a $10,000 gift, was presented by the Mary Byron Project, a Louisville-based nonprofit that seeks to attack the root causes of domestic abuse.

Chosen from among more than 300 nominees, the Alma Center addresses abusive men as trauma victims. It works to help them heal through its Wisdom Walk to Self Mastery, a healing circle that draws on indigenous wisdom and current neurological science, and the Men Ending Violence program. It also offers classes to help men become better fathers and find employment.

In addition to the award presentation, an open house at the nonprofit’s offices, 2821 N. 4th St., included a silent art auction, community mural painting and testimonials by program graduates. Local African-American artists, ArtWorks for Milwaukee teen artists and other artists donated more than 150 pieces to the auction.

Paul Fowler, who graduated from the Alma Center in April, said it took him five years because he dropped in and out. Like most of the men who are helped by the center, Fowler connected with it through the criminal justice system.

But his mentor and teachers stuck with him and he was finally able to achieve self-knowledge and control, and find peace, he said.

“Some people actually took the time to sit here and teach (us) why we are mad, what we can do about it, how we can talk to each other,” he said. “It’s like therapy. You get to sit here and talk to everybody and figure out what led (you) here.”

Facilitator James Mosley explained that men who are traumatized by pain and violence when they are young internalize the fight, flight or freeze response and it becomes automatic and, seemingly, as uncontrollable as blinking or sneezing.

Once these men have faced what they have done to themselves and to others, and also what has been done to them, they can understand how they came to this place and they can heal and change their behavior, Mosley said.

Most of the 250 men who Alma House helped last year were referred by one of Milwaukee County’s three courts devoted to hearing domestic violence cases. Offenders now meet with Alma House representatives at the time of sentencing. While earlier paths to the program resulted in three-month waits, the current setup allows the men to begin the program within two weeks. And the “show up” rate has gone from about 50 percent to about 80 percent, according to Terri Strodthoff, founder and president of Alma House.

The reason offenders are motivated to buy into the Alma House program when they begin is that staff members listen to them, Strodthoff said. They often express gratitude for that, she added, and they come to realize that people care about them.