Beyond the Bell mobile app created by UWM App Brewery and non-profit Center for Youth Engagement. 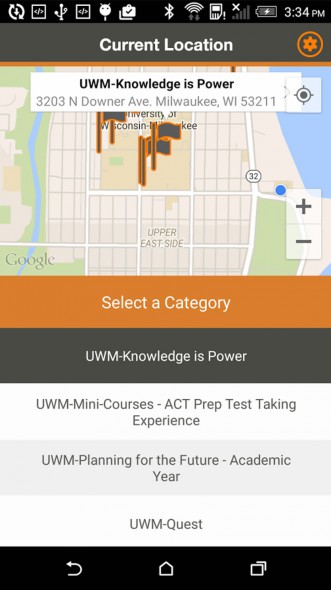 Beyond the Bell Milwaukee has announced the release of a new mobile app that was developed in partnership with UW-Milwaukee’s App Brewery. The Beyond the Bell mobile app was developed in order to help young people, particularly those aged 12 through 18, to find after-school programs that not only cater to their interests, but are located near them.

Beyond the Bell Milwaukee is a special initiative that was launched by the Center for Youth Engagement in 2013 after the results of a survey revealed that many young people have little awareness of after-school programs. Beyond the Bell employed teenagers working with the city’s Earn and Learn program to map out youth serving agencies throughout the area. Over 200 agencies in Milwaukee County were surveyed, and an interactive map was created for the Beyond the Bell website in order to help locate the programs. The map is updated regularly.

UWM’s App Brewery is a startup program located within the university at the UWM Alumni House and led by Dustin Hahn, that employs UWM students to work with and develop applications for various clients — both non-profits and companies that have partner relationships with the university. The Beyond the Bell mobile app includes a GPS system that reveals all the available after-school programs within a certain radius of the user, which can be adjusted to search for programs closer or further away. The app displays the address, contact information, and the website of the program, and enough information for users to decide whether the program would interest them. The app also includes ways to filter searches, so users can select certain categories of interest to  weed out programs that might not appeal to them.

“I’m not a youth. I can build you an app, but I don’t know what you want,” Hahn notes. So the App Brewery used focus groups and feedback from the youth to help determine what information to include. “It’s really an app developed by UWM, but created by the youth, which I think is huge,” Hahn adds.

The Beyond the Bell mobile app is available for download on Google Play for Android devices.

“We’re expecting it to be released on Apple in the next 10 days or so,” Hahn says.