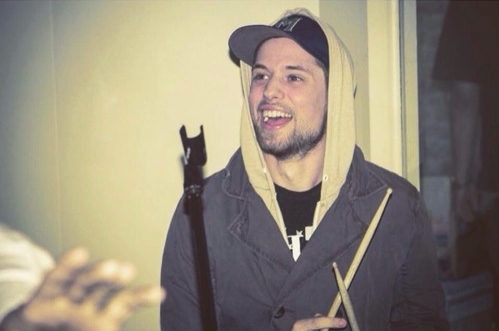 In 2012 when I was still living in Canada I discovered a band that absolutely blew me away with their modern blend of jazz chops, punk attitude and instrumental hip-hop music. Since then I’ve seen BadBadNotGood (BBNG) a handful of times, and their live performance is always a frenzied, euphoric crescendo of energy and sound. They’ve gone on to produce an album with legendary Wu-Tang Clan rapper Ghostface Killah. When I moved back to Milwaukee and immersed myself in our music scene I was ecstatic to find a group of artists working in the same realm as BBNG, a band in their early 20s called Three.Stacks.Eliot (TSE), led by Sam Lewis on drums.

Of all the people I’ve got to know in the Milwaukee music scene, Lewis is one of the most genuine. He puts the music above all else. A precocious kid, Lewis decided one day that he wanted to play drums, so he picked up an MPS Recreation Guide and found a class. From there he went on to play in the jazz band and drum line at (now closed) Fritsche Middle School, at Rufus King High School, with a private teacher and at conservatories. TSE formed around the same time I discovered BBNG and have since made a name for themselves in Milwaukee by collaborating with local hip-hop artists, including an incredible performance with Klassik and the Milwaukee Ballet at the Grain Exchange Building in April. I sat down with Lewis before the release of TSE’s excellent debut full-length The Message is Real.

How did you get into the Milwaukee jazz scene?

After graduating from high school I knew nothing about the jazz scene so I went to a show at The Miramar Theater. One, because it was all ages, and two, because it seemed like a really cool show. Kevin Hayden was playing there and he really impressed me. I just went up to him and said, “Hi,” and then he immediately took me under his wing. That dude was essential to me becoming a musician and forming Three.Stacks.Eliot. He gave me pointers on the business and tried to teach me from the mistakes he’d made. He’s just one of the many mentors I’ve had along the way. I’m a culmination of everyone I’ve met and everything I’ve experienced. I even played with members of Soul Low back in the day. We were called Informal Blues and we did Chill on the Hill, South Shore Farmer’s Market and even a fundraiser for the mayor.

During college I would sneak into venues regularly, because I was underage. The scene was still growing at that point and you mainly heard a lot of jazz standards. Now you see more killer players like Fred Boswell Jr. performing material that they wrote, which has put the scene on a great trajectory. But now the Jazz Estate is closed and many of these guys are older and/or used to getting paid a certain amount, so they aren’t willing to play the DIY spaces, so it’s struggling in that sense.

How did Three.Stacks.Eliot come to be?

At the beginning of college I had a big decision to make about where my life would go. I had to decide between making money gigging as much as I could but not really following my vision or get a non-music job and focus on creating a project I believed in. Luckily I had some players around me, Teddy and Brian, our old keyboard player, were there and we jammed and by the spring we formed TSE. I met Cody Steinmann a year after we started. We had played together once at some random gig and then I put a call out on Facebook and he fit the bill. What he brings the most to the band is his music mind is super sharp and he’s down to learn anything. He knows what he’s talking about and what he’s playing. He’s a complete metal head too, which is cool. He played bass in a few metal bands.

Kevin Hayden introduced me to Calvin Turner, who plays bass. He didn’t ask whether or not we were looking for a bass player, Kevin just insisted we jam with him. Calvin came to one rehearsal before a show the next week at Hotel Foster and he destroyed, and he continues to destroy every time he’s out there with us. Euko has been our resident rapper and he’s one of my best friends to get an honest opinion from, but at this point I think we’re mostly going to use him for live shows. Maria “Cree” Myles has sang with us and is on the album, plus has her own EP dropping soon, but she’s not necessarily in the group anymore. So that lineup has fluctuated a bit but now I feel like we’ve got a chemistry that feels right.

When did you cross over into the hip-hop scene?

We work with a lot of hip-hop acts but I wouldn’t say that we’re in the hip-hop scene. I like to think we’re somewhere in between the jazz scene and the hip-hop scene. At least that’s how I see our aesthetic. Because I have so much respect for both of those scenes. The logical next step of jazz was funk and then after that it was hip-hop, so that’s how I got into the culture.

I wanted to do a one-day festival at the Jazz Gallery in Riverwest and that evolved into a monthly series with a different artist each show. The first one we did was with WebsterX, we also had Lex Allen, Vonny Del Fresco, Emmitt James, and Genesis Renji. It was so much fun and it got us in the habit of learning other people’s music really quickly because we’d only do like two rehearsals the week before the show. On the flip side they would gain the experience of working with a band that pushed them to improvise around what we were doing, because we would inevitably mess around with their music a little bit. When we started our goal was to play with Klassik, which we did a few times this year. Now that we accomplished that it’s more important to focus on the band, rather than continue to focus on collaborations.

Our big thing is musical intensity. We’re going to take the songs somewhere they weren’t on the record. The live show is about pushing the sound almost to the point where the audience might be confused, but they should be excited, if we do it effectively. We also work in solos. I aspire to a live show along the lines of what Thundercat does. We’ve lost our keyboard player to a study abroad year in Japan but we’re not actively on the hunt to replace him. Down the road I’d like to get a new player in who can hold down big notes, as well as a stand-up bass player. My goal is to create a wall of sound during our live shows. I did just get a Fender Rhodes, so I’d like somebody to come in and wrangle that beast.

How did the new album come together?

I started writing it at the end of last summer. “Sycamore” was the first composition I challenged myself with writing. Some songs I wrote mostly by myself, others were jams that came together in a matter of minutes. We finished creating the music in late Fall of 2014 and started recording in January of this year. The recording process was frustrating and fun. It took about three months because we did it in my parents house and tracked all the songs on my computer.

I’m really grateful for the rappers we were able to work with on this project. I can’t say enough about Reggie Bonds, that man works really hard. And his flow sounds so effortless. I wanted him and Mike Regal on “What We Need” and I love what they came up with. I knew I didn’t want it to be a freestyle or like one of their leftover verses, but I was scared giving direction to rappers who write that well. I felt like that might be taking away some of their creative control. But I looked at it like giving them a prompt and surprisingly they came through and that’s one of my favorite tracks on the album. The substance of what they’re saying is immense.

Genesis Renji, who has since relocated to D.C., was another standout on the album. I didn’t expect him to go where he did on “Sociology.” Those were actually the last vocals I got. He sent me two verses to choose from but they were both so strong that I couldn’t cut either. Instead I just put one at the beginning before the music so it’s got a spoken word vibe.

The album deals with a lot of heavy issues (racism, income inequality, education). If The Message is Real, what is yours?

I’ve been raised to be very progressive and democratic, not in the political sense but in the social sense. The song that Reggie and Mike are on is about youth and that’s what I do for a living. I work at the Boys and Girls Club and I did a free drum camp for kids this summer at the Jazz Gallery. This topic is very dear to me because while the local music scene is blowing up in a positive sense, local music programs are also blowing up in the negative sense, like they’re disappearing.

As a musician, I think it’s important to ask yourself if you are making a positive impact on your community. We’re going to move on someday, whether it’s to a bigger stage or to no longer making music, so it’s important that young musicians have a chance to take our place. I was given so many opportunities and wouldn’t be where I am if not for older musicians taking the time to help me, so I expect that we do the same for the next generation. Music kept me out of trouble. I know so many kids who went through MPS and turned out great because arts programs were well-funded. Today, that’s not necessarily the case, so us artists need to step up and fill in the gaps and make sure kids get a chance to express themselves and do more than just take standardized tests.