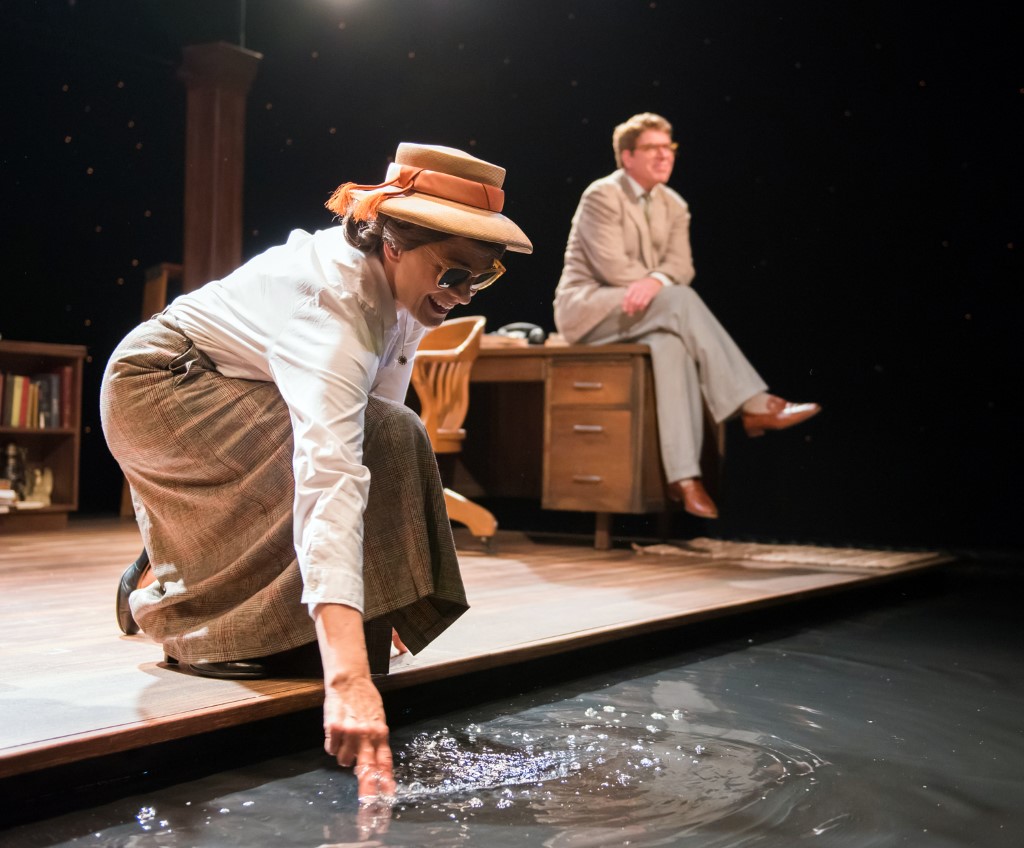 More than words in the air are needed – and fortunately delivered – to portray two Pulitzer Prize-winning poets whose correspondence and intellectual bonds fashion the Milwaukee Chamber Theatre’s Dear Elizabeth, running through October 18 in the studio theater space at the Broadway Theater Center.

The poets in question are Robert Lowell and Elizabeth Bishop and the title of their collected letters is “Words in Air.” From that enormous output,  playwright Sarah Ruhl extracted and reassembled a relationship that suggests a mystic romance over 30 years (with few face-to-face meetings) between Lowell and Bishop, though he married three times and dealt with manic depression while she formed a relationship with a female architect and drank to excess. His output and confessional style was voluminous, her observations of nature drew power from restraint.

Their letters, often couched in ordinary back and forth, but elevated at crucial times by their literary gifts and some wonderful observations, serve as an unusual but attractive fabric on which to hang their relationship.

But words are just the entry point, not the key to believe in these two characters who sit at opposite writing desks somewhere in space, surrounded by shallow pools to splash their poems and memories in. They occasionally intersect physically while their writings intersect constantly. They age and change their edginess before us. Props connect the relationship – occasional information slides on the back wall, a crescent moon, a ladder, a clothesline pulley to deliver postcards.

Such devices are done with cautious good taste by director Marie Kohler and staff, but prove largely unnecessary and occasionally intrusive, though I do admire Steve Barnes’ set and the movement coaching of Maria Gillespie. But these devices sometimes over-underline key motifs and make too obvious what Ruhl has constructed and Kohler has pursued.  Having Bishop sip a glass of wine and also pull out a gin bottle from her desk, or having Lowell prance and collapse in illness at a crucial plot moment would normally smack of psychological overkill.

Or would be overkill — were it not for the smoothness and nuance of the two lead actors, Carrie Hitchcock and Norman Moses, who make Dear Elizabeth so engrossing. They keep us interested and alert even before we know where they are heading. They put flesh and muscle on Bishop and Lowell, keeping true to character observation, but employing subtle acting skills, even physical changes through the way they breathe.

The two poets are well known to scholars, but not to theatergoers (perhaps seeing the play will elevate further exploration in their poetry). But they bring no major cultural celebrity of their own (this is not Elvis meets Madonna). Nor does their special passion for each other — unfolding in letters, not body bumping — fit the current expectations of romantic pull between two people.

The actors must add those dimensions. Moses could have played Lowell as New England Brahmin, fitting his upbringing and social circles, but he finds a middle-aged boyishness and almost desperate enthusiasm that make Lowell’s physical collapses and domestic entanglements more accessible. Similarly Hitchcock plays honestly with Bishop’s shyness and watchful nature – which makes more gripping her body-racking outrage over intellectual violation of her principles. Through such techniques the actors grab and hold us. What could have been an academic argument about literary ethics becomes in the second act the souls of mutual identity being ripped apart.

Make no mistake. This is a play that requires careful listening to nuance and alertness to an almost ghostly pattern of behavior before the revelations come crashing in. It relies on different mind muscles than most theatergoers bring and it ought to serve as a reminder that we tend to anticipate where theater is going rather than just giving ourselves over, as we should. Audiences used to instant gratification and explanation will be disappointed. In fact, without such quality actors, the story would feel stillborn.

Perhaps this is why the production is tempted into two endings, one that seems tacked on to make us feel good, the better, earlier one recognizing that skilled actors can slyly bring tears to the eye just by getting inside those words in the air. 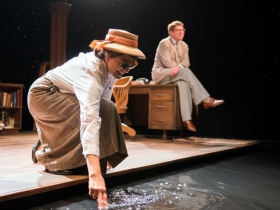 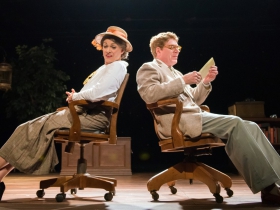 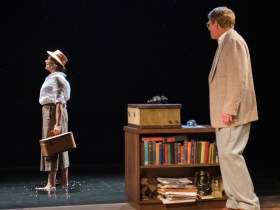 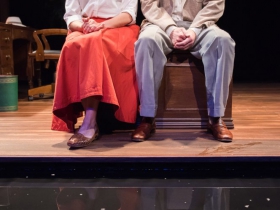 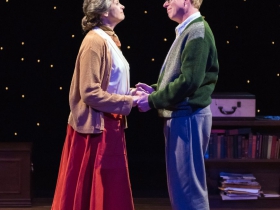