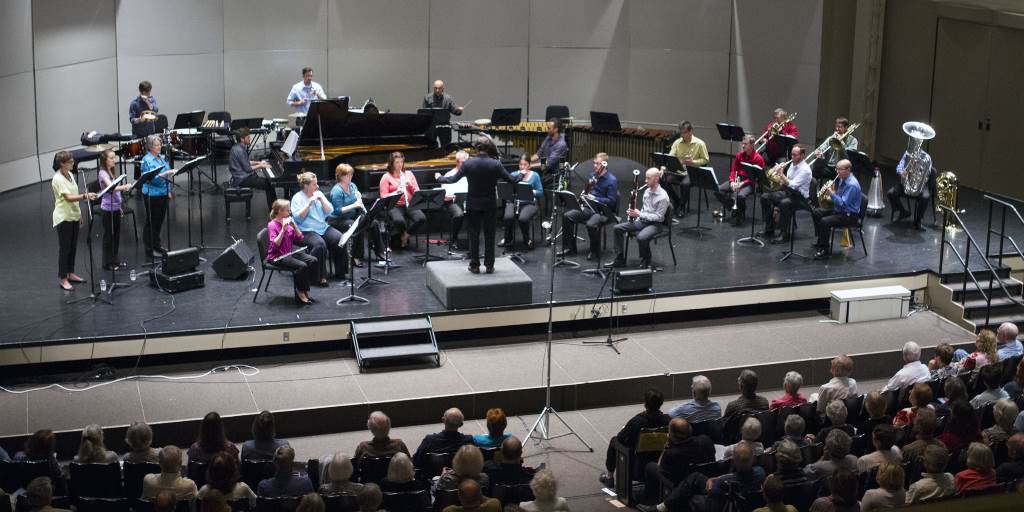 There was a mountain of music to enjoy and contemplate in this program. Mozart’s Gran Partita in Bb, K. 361; Luciano Berio’s Sequenza VIII for solo violin; and John Adams’s Grand Pianola Music were all expertly delivered, but the show was stolen by pianists Cory Smythe and Yegor Shevtsov in John Adams’s Hallelujah Junction for two pianos. The first thing one noticed about this piece is that it is a rhythmic challenge. Rhythm, tone, and color were inseparable here, as a groove grabbed the ear and shards of color leaped out like musical sparks, then the groove slipped a gear, recovered, slipped again, and found a different groove entirely. Smythe and Shevtsov were in the zone. Mixed meters ricocheted and sparkled with tight rhythmic precision; their technique sounded effortless, but that wasn’t really the half of it. These two added that ineffable quality of enhanced electricity that takes a performance from good to great, with dazzling dynamics, a constant lightness that never let the piece bog down under the virtuosic demands, and a matched artistic purpose that sold both the sizzle and the steak. For added measure, Shevtsov seems to have played his part from memory. Considering the demands, I’d say this was a freakishly staggering feat.

At the end, the audience leaped to its feet. I am rather critical of the ease with which Milwaukee audiences give standing ovations. It is sweetly supportive and generous, but discounts quality. Here, the urge to stand, clap, whistle, and holler were all perfectly appropriate. The Adams piece in the hands of Smythe and Shevtsov was incredibly good.

The program opened with Mozart’s Gran Partita for 12 woodwinds and string bass. Mozart on a Present Music program is rare but not unheard of and, in this instance, it was savvy, as the color palette of the winds and horns augured well for the Grand Pianola Music. Stalheim conducted the Mozart with a good ear for phrase shape and a mature feel for tempi that offered both variety and motion. Clarinetist William Helmers gave his solo voice generously in the opening bars and was a true star throughout the piece. An instrument that isn’t heard too often is the basset horn. It is akin to an alto clarinet, and it adds warmth to the woodwind sound that is most rewarding. Basset horn players Barbara Drapcho and Trevor O’Riordan played the seldom-heard instrument with skill and charm. The oboe playing of Katie Steele is always clear and precise, and her many solo passages were elegantly shaped (particularly impressive in a variation in the Tema con variazioni) where a velvet blanket of sound supported Steele’s lovingly played melody. The Finale–Molto allegro flew by like summer and featured some particularly fleet bassoon playing from Rudi Heinrich, clarinetists Helmers and Ben Adler, and oboist Steele.

Adams’s Grand Pianola Music sounds like it could be the love child of Hallelujah Junction and the Gran Partita. Two pianos set down rails of rhythmic stability. Sections of woodwinds, brass, and three women’s voices followed, taking turns with different hues of the same colors. Where the woodwinds and voices sounded ethereal, the sound shifted across the stage to the brass, which was sometimes spare and otherworldly, sometimes massive and ominous. An exuberant percussion section splashed on the glitter and boom with authority.

The minimalist repetition in this piece, if allowed to become pedantic, could count as annoying. Adams himself, staggered by the initial negative reaction to his composition, thought, “I’ve got to take that piece down behind the barn and shoot it.” Thankfully, he did not. This work creates a panoply of color and sound that gets passed around the room like those funny cigarettes at a Grateful Dead concert. Sometimes the piece breaks its leash and goes wild, and seconds later it is serene and soothing. Even if you don’t like the work, it is a clinic in orchestration techniques and instrument blending that is fantastic to experience. Stalheim deserves a big high-five for conducting this behemoth. Multiple meters with sophisticated rhythmic intricacies, vast dynamic contrasts, and ensemble balances were well under his control. From where I was sitting, I could have stood more of the women’s voices, but this is small potatoes for such an energetic reading.

Violinist Eric Segnitz performed the most enigmatic work of the program: Luciano Berio’s Sequenza VIII for solo violin. This composition is a thorny listen. I would like several more chances to hear Mr. Segnitz play this piece. He is a wonderful violinist, and his ability to reveal the close harmonies in Berio’s counterpoint, play with aplomb the difficult technical passages, and produce multiple colors—with straight tone and spare vibrato, two separate muted sounds, and an overall eeriness—was testament to his skills, but this piece is one that requires the listener to concentrate both intellectually and emotionally. Sandwiched between the two works of Adams was a tough place to put this musical koan, but it showed Segnitz to great effect, and it demonstrated Present Music’s continued willingness to challenge its listeners and enrich Milwaukee’s musical tapestry. Milwaukee’s classical music season got off to a brilliant start.