By Jabril Faraj, Milwaukee Neighborhood News Service - Aug 20th, 2015 11:48 am
Get a daily rundown of the top stories on Urban Milwaukee 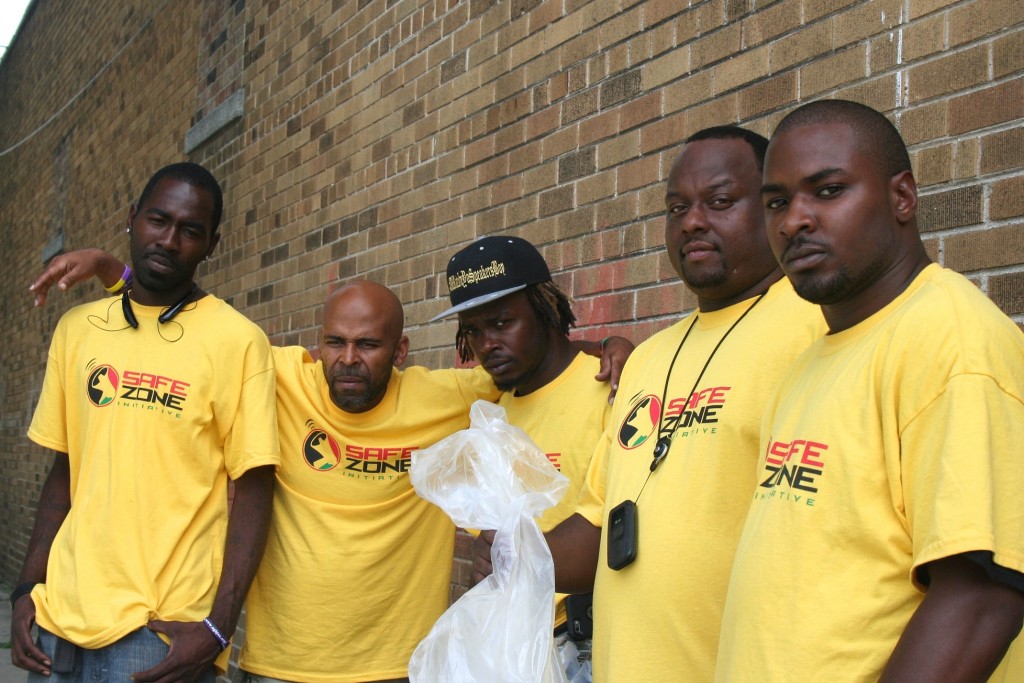 On Tuesday, July 21, residents of Garden Homes held the first of three outdoor church services on a short stretch of West Port Sunlight Way between North 26th and 27th streets. Only 10 days before, the shooting death of 35-year-old Eddie Powe occurred on the one-way street on the city’s North Side, which has been a hotspot for loitering, drunkenness, prostitution and drugs.

But, for three straight nights there were no gunshots, just praying and singing.

“It was wonderful,” said Martha Freeman, a long-time resident and pastor of Alpha and Omega Ministries who most neighbors know as “Momma” Freeman. “A lot of the people that, you know, had walked these streets before, they came forward and just asked for prayer that they could stop drinking, stop getting high.”

“It felt peaceful,” she said. “It was just something you really couldn’t describe.”

An experimental “Safe Zones” initiative, which secured $50,000 in city funding early this year, began work in the area at the beginning of June. Shortly after a July 2 press conference introducing a group of H.O.O.D. (Helping Others Obtain Direction) Ambassadors — local residents who seek to mediate conflict and improve the neighborhood — the homicide occurred. Despite the shooting, the ambassadors are bringing a sense of community, which had been lacking, back to the neighborhood, residents say. 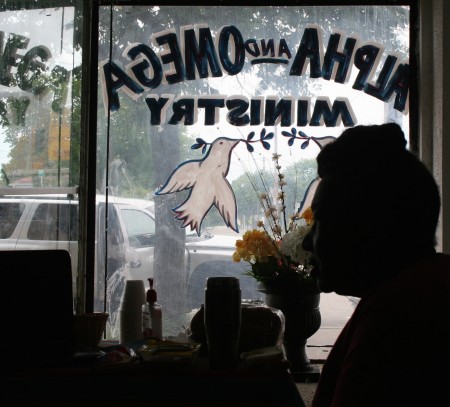 Khalil Coleman, a founder of the initiative, said when he learned about the homicide “it was a shock.” It had been about two years since there had been a shooting death involving a neighborhood resident. The incident tempered the ambassadors’ excitement at the progress they had made over the previous month, but at the same time, the event galvanized the community, Coleman said.

“After the homicide, what it really showed was … the immediate concern of people who didn’t want to see that happen again,” he said.

“Normally, that one-way stays packed — cars backed up, people standing by the abandoned houses, people doped out over there. We didn’t see that today. We haven’t been seeing that since that homicide took place,” Coleman said on a recent Friday afternoon. “Those are some of the changes that took place that you can’t measure on paper but that you can see in the shift of the culture in the community.”

While there have been struggles, the ambassadors also have seen some early success. The initiative, which has limited funding, is concentrating on creating a database to show the demographics and needs of neighborhood residents.

An early concern they identified was speeding. As a result, ambassadors circulated preliminary petitions to have speed bumps installed; they garnered enough signatures to get official city petition forms. Residents have been overwhelmingly supportive of the push, ambassadors say.

Coleman said ambassadors have been working on the petitions and database to address some immediate needs so they will be able to show tangible results. “But the real work is the work that can’t be measured on paper,” he said.

That work, Coleman said, is when the ambassadors are “in the trenches and somebody is arguing and they’ve got to step in and mediate the situation and they’re able to walk away.” In the past month, there have been at least two successful interventions involving weapons, where ambassadors were able to de-escalate situations that could have gotten out of hand.

“Some cars had pulled up from some people in the neighborhood, looking for another person in the neighborhood, with firearms … ready to do some damage,” Coleman said. “We were able to get the brother to calm down for a minute, you know, remove him from the situation and bring him into a space that was a little more neutral.”

Another more recent situation involved a man breaking a car window to steal a small amount of money. The car’s owner, who had been in the barbershop next door to the ambassador headquarters, followed the man, eventually showing a gun.

“It turned physical and it could have went beyond that,” said Shawn Moore, another Safe Zones founder. “But because the ambassadors were there … it never got no further.” 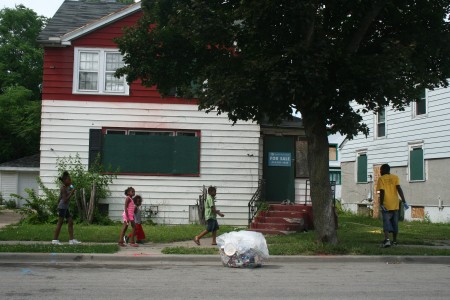 Children walk down the one-way Port Sunlight Way in Garden Homes while ambassadors pick up garbage. Photo by Jabril Faraj.

According to Dugan Meyer, a University of Kentucky graduate student researching community policing models, “They actually do interact, they actually do … what they are saying they’re doing.” Meyer has spent the last few weeks observing the ambassadors’ work.

“My impressions are really positive so far,” he said

Meyer hasn’t yet compiled any of the approximately 30 interviews he’s conducted with ambassadors, residents and police, but he said early indications are that the ambassadors are having success building relationships first, much like asset-based community development models, which prioritize people and relationships before investment.

“They know what to do; their focus is on the right thing,” he said of the relationship-based approach. “They’re starting where they need to start.”

The ambassadors have built relationships through traditional means, such as knocking on doors and speaking to residents, as well as through “restorative justice” practices, which involve atonement as opposed to punitive actions.

Because of this approach ambassadors were able to resolve the broken car window incident quickly. The window has been replaced and the man who broke it will pay the cost back by helping to clean out a cluttered building in the neighborhood. In another instance where an individual knocked items off a shelf at Golden North Town Foods, 4402 N. 27th St., the owner declined to press charges, even after the police had been called, because ambassadors intervened and the young man responsible agreed to work off the cost.

Coleman said those involved in the initiative are constantly asking themselves, “What does this restorative justice look like?” He said this approach is important because “we’re dealing with a community where people are going to need second chances.”

The key to the initiative is the ambassadors, most of whom are long-time neighborhood residents and some who have previously engaged in illegal activity but changed direction. They already have a relationship with the community and experience in the kinds of high-pressure, high-stakes situations where interventions are taking place.

Two teams of ambassadors hit the streets — walking the neighborhood in alternating shifts — at the beginning of June after an intensive three-day training administered by Moore, Freeman and three individuals who had belonged to Milwaukee-based street organizations. The training covered verbal de-escalation and conflict resolution, how to identify human trafficking, administering restorative justice and more. The team also took an “informed trauma care training” near the beginning of July at the African American Women’s Center on Vliet Street.

But, regardless of the level of respect or the amount of experience an ambassador has, the work is still difficult and sometimes dangerous, said Coleman. In the context of a potentially violent situation there isn’t a roadmap — every incident is different and decisions need to be made on the fly.

“It requires people … of influence to be able to do that, to be able to step into a situation and get a certain level of respect,” he said.

Initially, 12 or 13 individuals went through the training, said Moore. Ten ambassadors started work at the beginning of June.

As of Aug. 13, six ambassadors were still active; the four former ambassadors are participating in a restorative process to regain their positions. The process, similar to that utilized with residents, includes the ambassadors explaining their actions and the effect of those actions on others, and performing a task that will benefit the community and atone for the transgression.

Coleman said that, in part, the initiative will be measured based on the performance of the ambassadors. Their personal growth is important, especially because many are in the process of finding a new direction for their lives, he noted. 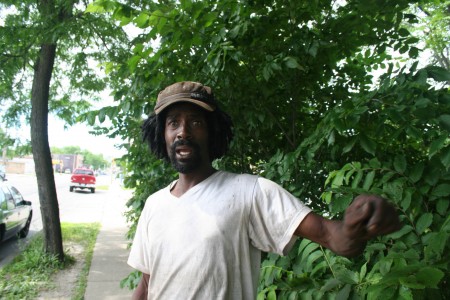 Adewole Burks, who grew up in Garden Homes, has worked at the Hot Spot Supermarket, 2643 W. Atkinson Ave., for about a year. Photo by Jabril Faraj.

Antonio Williams, a former ambassador who is participating in the restorative justice process, said that change in direction often comes with a change in perspective. “You come to a certain age where you just [realize] all of this … foolishness is uncalled for, especially when you start having kids and you start thinking about a brighter future for them — maybe a future for them that you never saw for yourself,” he said.

Another ambassador, Ricky Harrison, agreed with Williams. “It wasn’t about money anymore and it wasn’t about trying to do all the things that I felt that everybody else was doing and stuff like that. I let my ego go and I found something positive to do with myself.” Harrison, who also has children, is a tattoo artist, “cuts hair from time to time” and is planning to go back to school for barbering and audio editing.

Coleman said the one thing that sets the ambassadors apart is that “they believe.”

Teddy Ellis, an ambassador captain who attended college for a year and plans to go back when he is financially able, said he hopes to be an example for his three children. “I want them to see … things might get hard … but never give up. Don’t just say, ‘Oh, that didn’t work so that’s just how it is.’ Things don’t always work the first time around. But if you stay persistent, if you learn from the things that you do, things will change.”

And, the neighborhood has been changing, if slowly, since the ambassadors began working less than three months ago. Adewole Burks, a long-time Garden Homes resident who has worked at the Hot Spot Supermarket, 2643 W. Atkinson Ave., for about a year and has been going there since he was a child, confronted two women who were rolling a marijuana blunt on Atkinson Avenue, telling them to “take it somewhere else.”

The Safe Zones initiative will go back up for another round of funding at the end of August; the program initially sought $300,000 to staff four zones. Coleman hopes to expand to more neighborhoods across the city and to secure enough funding to support community projects and other initiatives.

Moore is confident about the initiative’s future and said if all goes according to plan, he expects to employ 51 people in ambassador roles by next spring.

“The community wants it; the ambassadors want it,” said Moore. “People are tired of the same old mess.”