By Tamarine Cornelius, Wisconsin Budget Project - Aug 19th, 2015 10:38 am
Get a daily rundown of the top stories on Urban Milwaukee

Wisconsin lawmakers have passed tax cuts totaling $4.8 billion over six years, according to a new memo by the non-partisan Legislative Fiscal Bureau released this week. These tax cuts have done little to boost job growth and have forced damaging cuts to Wisconsin’s public schools, universities, and health care system.

Lawmakers have passed dozens of tax cuts since January 2011, including millions of dollars in tax cuts that primarily benefit people with high incomes. And lawmakers aren’t slowing down – the total value of tax cuts has increased each year since fiscal year 2012, and is slated to go even higher, to nearly $1.7 billion per year in the two-year budget period that starts in July 2017.

Among the tax cuts passed since January 2011, according to the memo:

The tax-cut tally doesn’t fully capture the cost of three tax cuts that are being phased in over a period of time and for which the full tab doesn’t come due until after the 2017. Those tax cuts include: 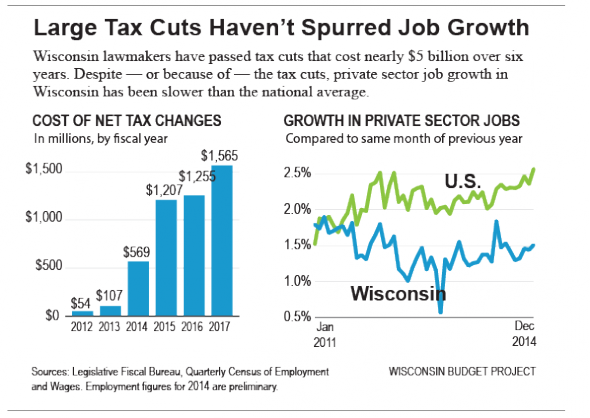 The tax cuts didn’t have much effect on Wisconsin’s ability to create jobs, but they did do a great deal of harm to our ability to make investments in the fundamentals of our state’s economy. Wisconsin has had to make deep cuts in state support for public schools, our university system, and our health care system in order to pay for the tax cuts. Those cuts are doing long-term harm to Wisconsin’s ability to build a well-educated, healthy workforce and to compete in a global economy.

3 thoughts on “Tax Cuts Do Little to Spur Job Growth”