Leading the Way in Green Infrastructure

Outpost Foods in Mequon and All Peoples Church on N. 2nd St. have sophisticated green systems. 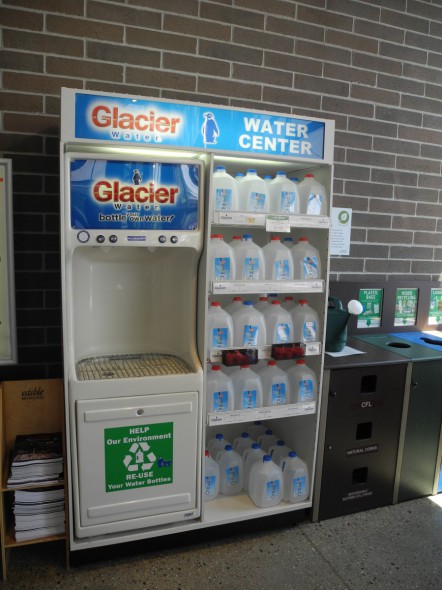 When Outpost Natural Foods began planning its fourth store, to be located in Mequon, it was thinking about more than organic food. “When we decided to build at this location, we wanted to make it as sustainable and green as we could,” says Outpost Sustainability Manager Jessy Servi. “So we applied for the green infrastructure grant from MMSD.” The result was the creation of a “zero-runoff site,” meaning all rain that falls is managed entirely on site and none runs off onto streets and sidewalks and into sewers.

The grant from the MMSD — the Milwaukee Metropolitan Sewerage District — is among many it has made. The MMSD has become the foremost champion of sustainable water use in metro Milwaukee. According to its Public Information Manager Bill Graffin, whenever one inch of rain falls on the entire MMSD service area, that produces seven billion gallons of water. Since the Deep Tunnel system can only hold 521 million gallons, much of the remaining water simply runs into rivers, streams, and Lake Michigan without being treated or after partial treatment. “Green infrastructure is important because it helps manage water where it falls, so that it doesn’t become somebody else’s problem downstream,” Griffin notes.

For projects that are particularly successful, the MMSD has started recognizing them as “Green Luminaries.” The two most recent winners are Outpost and All People’s Church on the near North Side.

The MMSD’s Green Luminaries award recognizes Outpost’s Mequon store (7590 W. Mequon Rd.), which opened in May 2014, for its water-saving technologies, both inside the store and out. Servi gave me a tour of the store’s “zero-runoff” system. One part of that is a rainwater catchment system on the building’s roof, which connects to two 4,000 gallon tanks buried underground behind the store, where rainwater can be stored for future use. Usually, that water is used to irrigate the store’s onsite kitchen gardens, where they are growing vegetables to be used in the store’s café.

The most aesthetically spectacular feature of the system is the store’s extensive rain garden, which stretches along the southern and western edges of the property. The plants in the garden are all native species of southeastern Wisconsin, so once established, they should thrive without human interference. The designers of the rain garden chose plants that can survive a variety of water conditions, so the garden should be fine during both periods of heavy rain and in near-drought conditions. Servi says that the garden “has engineered soil in it with a perforated pipe underneath, and so in a rain event, the water falls and gets stored here and then slowly percolates. So it’s not only slowing and spreading and sinking the water, it’s also filtering it.” 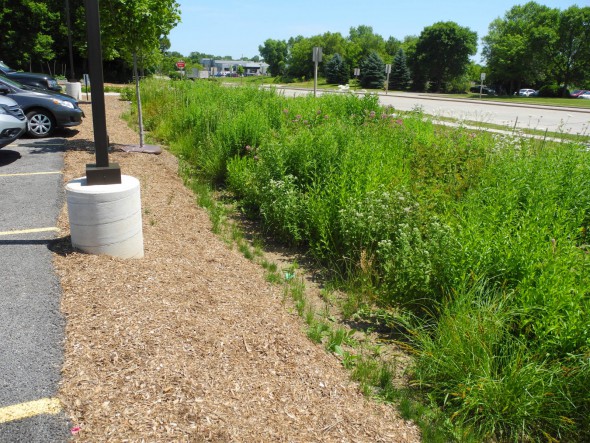 Sloping down to rain garden at Outpost Natural Foods. Photo by Laura Thompson.

The parking lot at the site is pitched towards the rain garden, directing the flow of water towards it. As the water flows through the garden, the plants along the way act as filters. By the time the water enters the sewer system, it is much cleaner than when it flowed into the garden.

The parking lot itself features another sustainable technology known as porous pavement. This is just what it sounds like – pavement that allows rainwater to seep through it. Chunks of gravel lie underneath the porous pavement, giving water enough spaces to travel through to reach the rain garden.

One common issue in urban areas is that water often has to travel across huge areas of pavement before it can find a place to seep back into the earth or directly into bodies of water. As it travels across a lot of impenetrable surfaces, the water can accumulate high amounts of chemicals, often from fertilizers or leaked from vehicles, and bring all of those chemicals with it as run-off pollution. Porous pavement combats that problem, by giving water more immediate places to sink into the ground, where it can naturally be filtered by soils and plants.

Outpost also features an unusual technology within its store. At the entrance, customers can fill water bottles from a water island that filters water by reverse osmosis. The filtered water is purer, but “what people don’t realize,” says Servi, “there’s waste water associated with that — about one-to-two gallons of waste water per gallon filtered. So what we do, the waste water gets pumped into a tank that’s used to flush the toilets.”

Through each of these innovations, the Mequon Outpost has been able to manage approximately 46,000 gallons of water at its site annually. 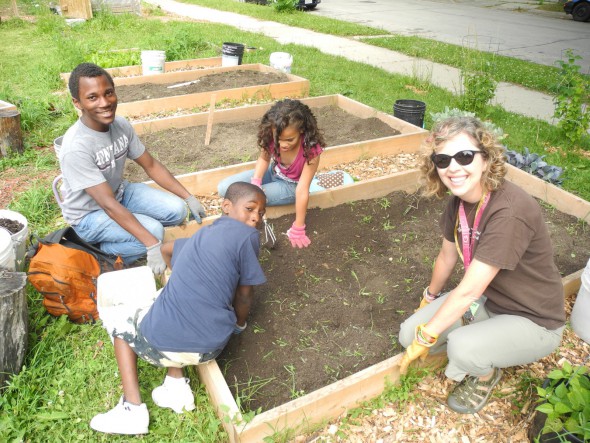 Linda Muth with students at All Peoples Church. Photo by Laura Thompson.

All Peoples Church, located at 2600 N. 2nd St. in the Harambee neighborhood, is a diverse congregation that runs gardening programs for youth. It has three garden properties: a community garden at the southwest corner of W. Clarke and N. 2nd streets, a smaller garden directly to the north of the church on N. 2nd St., and a new orchard property, located in five vacant lots alongside W. Locust St. between W. 1st and 2nd streets. The church also have several greenhouses, and one classroom where they grow edible plants. All Peoples Church was recognized by the MMSD for their sizable water reclamation system.

Linda Muth, the Minister of Partnerships at All Peoples Church, gave me a tour of the site while the student gardeners were hard at work. “All Peoples Church has been committed to urban gardening since the early 1990s,” she says, “so before it was cool, we were already doing it as part of our core value of creating scared space. So, sacred space not only inside the church for worship experience, but outside in the environment to care for God’s creation.”

The church runs a work program called Kids Working to Succeed, which allows kids ages eight to 16 to learn about gardening several mornings each week. Participating students work in the garden on Tuesdays, Thursdays, and some Saturdays during the summer. During the winter, the students also take part in indoor gardening activities. Currently, the church has about 40-60 students working with them. Students between the ages of 16-18 can apply to be supervisors within the program. As Muth explains, “the adults that you see are here are just mentors and advisors for the supervisors, and we always defer to the supervisors. So we’re building youth leadership through the program.” Students receive a monetary gift at the end of each month, and are encouraged to practice “10-10-80,” which means giving 10 percent of their money to the church, use 10 percent for spending money and fun, and save 80 percent of their earnings.

As part of the program, students are required to attend church services each week. Church member Susan Holty says, “Part of the program is that they do need to worship on Sunday morning or night, and they need to be bringing their parents. It’s that responsibility that they’ll be here, that they’ll learn, that they’ll work as a team. We start with a Bible study on each of our teaching days, and after that they go out and have their jobs.”

When I visited the community garden, it was abuzz with activity. One group of students was busy painting murals on rain barrels meant to collect water for future use. A second group was planting donated zucchinis, while a third group was tending to plants in a greenhouse. Yet another group was trying to remove weeds from the cracks in the sidewalk in front of the church building, while another group was charged with bringing back containers of waste from another site.

“Everything you see is with the intent of providing food.  We run a free farm stand every Wednesday evening at 5:30, so the community can come and shop for produce. They can get it for free, but if they wish to make a little donation, they do. Last night, we had rhubarb, strawberries, mustard greens, a variety of herbs, green peppers, purple beans, and peas that we had harvested from our gardens and offered to the neighborhood,” Muth notes. 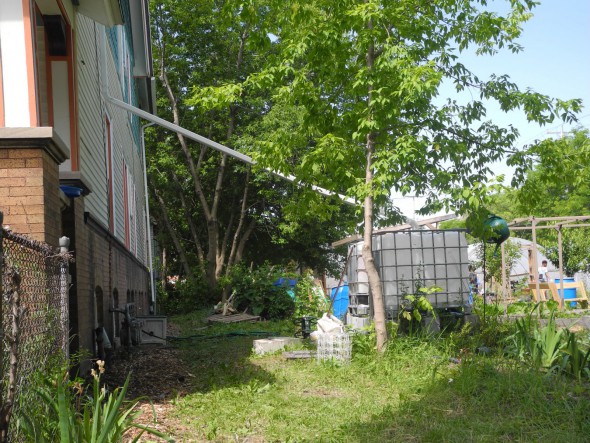 The community garden has quite a few systems in place to reclaim water. Holty actually bought the house next door to the community garden, and turned it into a ministry house for the church. All of the water that lands on the roof of that house is collected and used to water the plants in the garden. A long gutter pipe snakes down from the house’s roof, directing water into a series of buckets within the garden. Some of the cheeriest features of the garden are the merrily decorated freestanding rain barrels. Each plant bed had its own rain barrel at its edge. Holty explains: “Our newest system is they’ll [the rain barrels] go between each of the two planters, and harvest the water, and then we have a drip system that will go in those two planters so that they will be watered whenever they are turned on.” The rain barrels at the community garden were donated by Lakefront Brewery.

The MMSD grant funded the church’s porous-pavement system in the garden next to the church. According to Muth, “We built this with our own two hands, kids hauling five-gallon buckets full of substrate rock. It’s excavated to four feet deep, so we’re able to collect – just from this patio in a rainstorm – 4,000 gallons of water. All of our reclamation systems, all together – the rain barrels that you saw in the community garden, the patio, the rain barrels that you see off the church here, this water system which collects rain off the greenhouse roof – during a rainstorm, we collect 10,000 gallons of water.”

Muth said that All Peoples Church also worked with MMSD and the city Department of Public Works to construct a catch basin and a 1,000-gallon cistern at the new orchard. Those systems collect water off of the hill and sidewalk at the orchard site. Says Muth: “It’s a very large hill up there that wasn’t a build-able hill, so the city asked if we would put an orchard on that property and maintain it, to help prevent flooding at the bottom of that hill.”

“When we look at water reclamation,” Muth goes on, “that means that we’re not using city water to grow all of those crops” — saving the church money on water costs. “But also, it’s healthy for the environment that we’re not putting all of that water back into the storm sewer system.”

Outpost and All Peoples Church Gallery 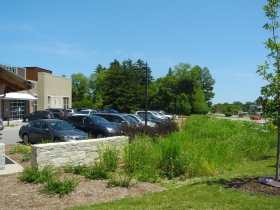 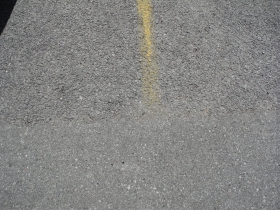 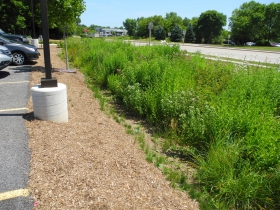 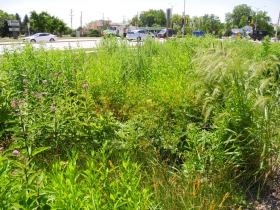 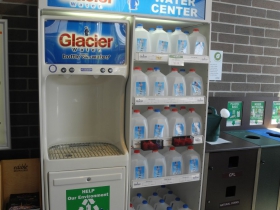 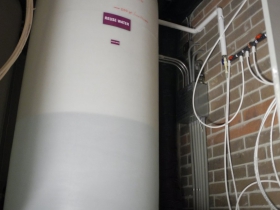